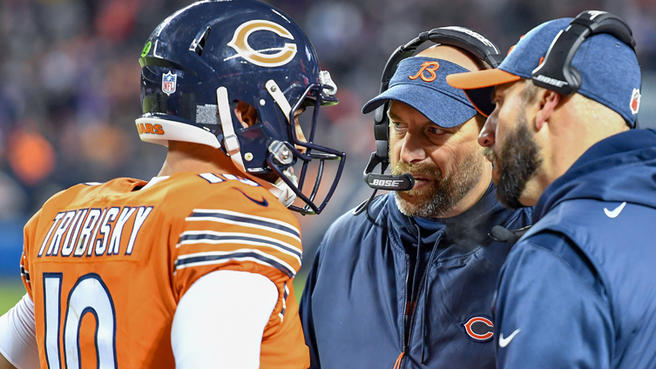 The Nagy-Trubisky connection has set the Bears back years. How long of a leash will Pace give them? | Photo by: NBCSports.com

The move allows Trubisky to become an unrestricted free agent following the conclusion of the 2020-21 NFL season. However, Pelissaro also reports that the team likes Trubisky’s approach to the Bears’ open competition for starting quarterback duties following the acquisition of Nick Foles.

The #Bears are declining the fifth-year option on QB Mitch Trubisky, source said.

The team has liked Trubisky’s attitude since the Nick Foles trade and it’ll be an open competition. A chance for Trubisky to make himself a lot of money before his contract expires next March.

The former No. 2 overall selection in the 2017 NFL Draft, Trubisky enjoyed a breakout campaign in 2018 before suffering a startling regression in 2018. This offseason, the Bears traded a fourth-round pick to the Jacksonville Jaguars in exchange for quarterback Foles, who will compete with Trubisky for starting quarterback duties.

The Bears infamously selected Trubisky over Deshaun Watson of the Houston Texans and Patrick Mahomes of the Kansas City Chiefs, with the latter since collecting both an NFL MVP and Super Bowl MVP award. Meanwhile, Trubisky’s stagnation crippled a Bears roster harboring Super Bowl aspirations.