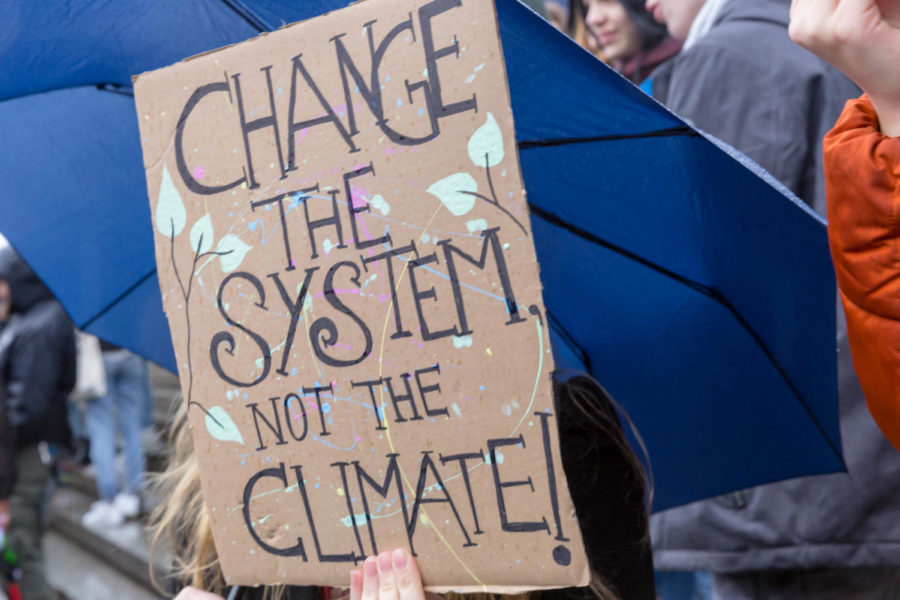 Spring not only brings life back to all of those who have laid dormant over the winter, but it also brings revitalization back to the NEIU campus and its community. It is only fitting then that Earth Week occurs right in the middle of it.

This year, NEIU held six Earth Week related events throughout the week that began on April 19. The Independent was only able to cover one of the events—the Interdisciplinary Climate Change Stories held that same evening.

Students presented different cases for combating climate change that ranged from the medicinal purposes of plants in the rainforest to changing one’s perception of what an electric car can be.

Hiba Salman made the case for saving tropical rainforests for their medicinal benefits alone. Salman said that only 1 percent of known plant species have been examined in rainforests while 2 percent are wiped out each year. Additionally, forests act as carbon sinks and so the act of deforestation releases the carbon dioxide that is stored in the vegetation.

Following Salman were Isabelle Curran and Mac Austin who presented on replacing industrial agriculture practices with regenerative agriculture. Curran and Austin said this type of practice focuses on ecosystem health as a whole and that it actually returns carbon dioxide to the soil.

The long-term strategy of the United States is to achieve net-zero greenhouse gas emissions by 2050. “Net-zero” implies offsetting emissions by implementing strategies of capturing carbon. Currently, one-third of the U.S. ‘s emissions come from agriculture production. Curran and Austin pointed out that regenerative agriculture is an excellent example of achieving this.

However, they said that out of the 895 million acres of farmland in the country only 159,000  use regenerative agriculture.

Jessi Gessner presented on the importance of community gardens and tree canopies in cities. Gessner pointed to a recent study that showed that trees not only aid in filtering our air; they also help with our mental health. The Journal of Physiological Anthropology study found that after walking through urban parks, there were high scores in feelings of being comfortable, natural and relaxed and lower scores of tension-anxiety and fatigue.

Gessner also stressed the importance of community gardens in impoverished neighborhoods. She found that community gardens relieve stress, build unity amongst its members and  knowing the food is local gives producers a positive feeling while eating it.

Additionally, Gessner noted that many impoverished communities are also in the middle of what are called urban heat islands. These are zones where there is little to no tree canopy and as a result, during the summer months, temperatures can be 15-22° F warmer than adjacent areas.

Another point that Gessner made was that because of the sparse plant coverage that exists within larger cities, flooding is more likely to occur because there isn’t a soil system that allows for the dispersal of water. Instead, cities are reliant upon their infrastructure which can easily become overtaxed and back up.

Lucas Bernardi and Ryan Lundahl separately spoke on the topic of electric vehicles (EVs). Bernardi covered the benefits and life cycles of EVs whereas Lundahl spoke on how all EVs are not made the same. In fact, some are even faster than traditional gas-combustion vehicles.

Though any action taken against climate change is important and truly needed, one of the standout cases was presented by Yang Jin and involved the implementation of microgrids into our current electrical grid.

Jin said that a microgrid is a small grid that can generate electricity locally within a building or community and can run independently—this is called an “island” when it does. These grids are usually powered by discrete renewable power sources such as wind and solar, which account for roughly 37 percent of renewable energy as of 2020.

To act independently from the main grid, the energy needs to be stored and not continually cycled. There are many different ways of storing energy. As a renewable source, mechanical energy can be found in hydropower and wind. The best way to store this energy is through pumped hydroelectric storage and gravity batteries. Chemical energy, which could potentially be the conversion of CO2 into a fuel source using wind and solar, can also be stored in batteries and used as hydrogen. And thermal energy can be stored as compressed air and can even regulate other sometimes unstable renewables.

The US electrical grid has nine central hubs with thousands of smaller stations running off of them. According to the Energy Information Administration, ensuring that these hubs are properly maintained is paramount to keeping the lights on for thousands of people.

“A balancing authority ensures, in real time, that power system demand and supply are finely balanced,” its page said. “This balance is needed to maintain the safe and reliable operation of the power system. If demand and supply fall out of balance, local or even wide-area blackouts can result.”

In the last few years we have seen this come to light in a couple of ways. Last February, the Electric Reliability Council of Texas said its grid was about four and half minutes away from a near total collapse that could have left millions in the dark for weeks.

Irregular freezing temperatures brought Texas’s grid to a halt and power plants across the state went offline. About three months after that, the Colonial Pipeline on the East Coast was hacked and prevented access to fuel for millions of Americans in the southeast.

Jin pointed out that a microgrid already exists in our own backyard at the Illinois Institute of Technology (IIT). IIT was experiencing multiple outages a year and it would have to pay around $500,000 each time to have power restored. They solved the issue by implementing a “self-healing, learning, and self-aware” microgrid.

However, for further integration throughout Chicago and the rest of the country, Jin said we will need a massive amount of new infrastructure. According to a recent report by Princeton, to achieve net-zero emissions by 2050, we would need to invest $320 billion into electricity transmission infrastructure alone by 2030. That does not include investments into the production of energy generation such as wind or solar plants.

Each student made an excellent argument for each of their respective responses to climate change. With such a variety of solutions covered during the Interdisciplinary Climate Change Stories event, it can go without saying that there will need to be many solutions implemented to tackle the onerous threat that is climate change.