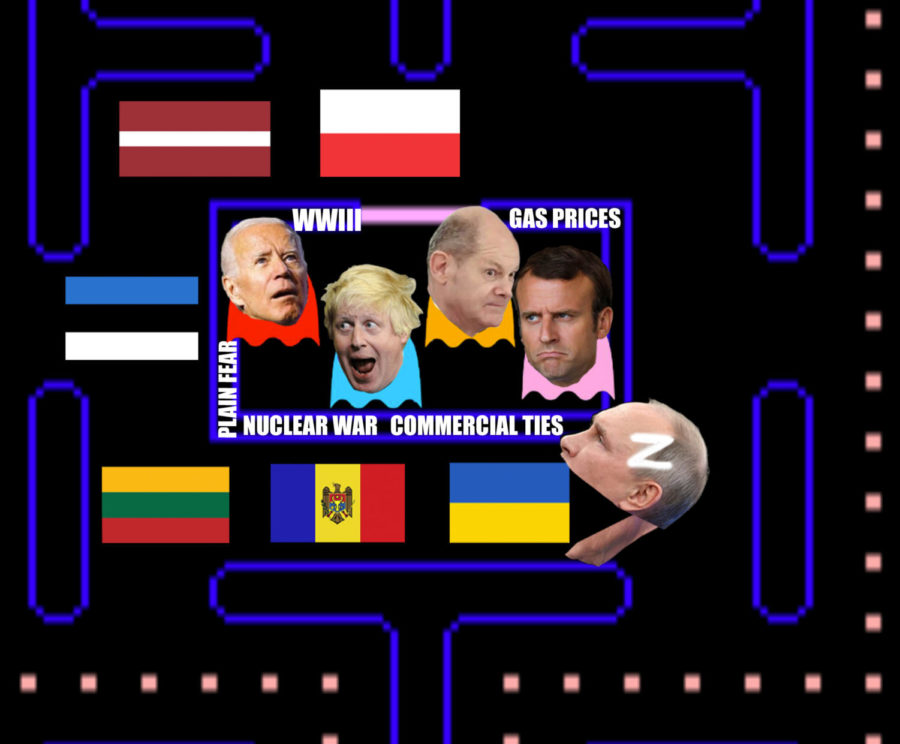 Russian military officers suggested that Kremlin’s objectives had extended up to Transnistria, in Moldova.

“We have not seen something like this in 80 years.” That is the most common thing you hear on the streets about Ukraine. “I thought we were over this kind of behavior,” is another common opinion. Of course, we have seen human brutality and destruction as a result of the Cold War and the clash of the West against Islamic nations, but not to the scale of what Russia is allegedly perpetrating right now in Ukraine, particularly the killings documented in the northern suburbs of Kyiv.

On April 7, Dr. Martyn De Bruyn, chair of the Political Sciences department, Dr. Charles Steinwedel, chair of the History department, and Alumna Krystyna Naryzhna participated in a Zoom event called “The War in Ukraine After Five Weeks: What Is Happening Now? What Is Next?” to discuss the future of the war in Ukraine after the defeat of the Russians in Kyiv and the discovery of executed citizens.

Social Sciences librarian Edward Remus moderated the conversation that was attended by approximately 50 members of the community who actively participated.

The two NEIU academics began the discussion with an overview of the current state of the conflict. Professor Steinwedel said that the events in Bucha, and the bombardment of civilian buildings across Ukraine is “how they [Russians] address civilian populations in opposite areas,” adding that Russians are doing the bombing intentionally, and that they used this strategy twice on Grozny, the capital of Chechnya, when this region attempted to break ties with Russia.

Aleppo received the same treatment. The Syrian city was the center of the resistance to Kremlin’s supported Bashar Al Assad’s regime until Russian bombers and artillery wiped it off the face of the Earth in 2016.

Naryhzna referred to the bombings and assassinations impassionedly, “I am sorry, I say this for Ukrainians expressing their anger.” she said, “[But] the events at Bucha turned us into a different nation. We are becoming aggressive. We are talking about not being weary of the dark side.”

Renouncing your sense of mercy and becoming aggressive—these are other consequences of the war for a nation that is fighting for survival, and that by doing so has accumulated a lot of hate. Naryznha is not alone in her feelings. Even Ukraine’s President Volodymyr Zelenskyy publicly recognized in an interview with the German magazine BILD that “he hates the Russian military,” and cannot help doing so.

Images of abuse of Russian prisoners by Ukrainian soldiers had surfaced now and then in the Western media, in some cases the abuse implies the summary execution of the captives. Although Ukrainian officials said that these violations of international rules of war are being investigated, they represent a small glimpse of the horror that is happening everywhere in the country.

Russian bombardments of civilian areas around Kharkiv and the obliteration of Mariupol and thousands of its residents account for war crimes that will be difficult to forget. Professor Steinwedel said that although “there is a cultural connection between Russia and Ukraine” he is afraid “the conflict will be so bitter that they won’t be able to live alongside each other again.” Naryzhna agreed, saying that actually “the sense of brotherhood [with Russians] died in 2014. We considered them our bigger brothers.”

No end to the war in sight

The horrors of the alleged war crimes committed by Russia all over Ukraine drove public opinion in Western Europe and the United States to support the delivery of more weapons and resources into the conflict. Professor De Bruyn said that in Europe “there is a sense of what is at stake” in the Ukrainian war.

Still, he says that Western countries “need to be careful with sanctions because countries can find their way around.” He also cautioned against the consequences of the sanctions in Europe, saying that the continent will be able to hold the sanctions, but also stressed that “as agonizing as the situation is, NATO cannot cross the line of looking like making a direct aggression to Russia.” He added, “we don’t want to hurt Ukrainian people more by escalating the conflict with, for example, a no-fly zone.”

Naryzhna replied to De Bruyn saying that “Russia won’t dare to attack NATO planes.” As Americans, British and Europeans pour heavy weapons into Ukraine to make the country capable of defending its eastern flank, Russia has limited itself to softly warn Ukraine’s allies about the delivery of weapons that can contribute to an ultimate upset Ukrainian victory.

The negotiations for peace are continuing at a lower level, but Zelenskyy is refusing to give territory away after what was discovered in Bucha and witnessed in Mariupol—before he had agreed to a referendum in Crimea—and Putin has also made indications that he does not want to negotiate. Yet, Western intelligence and Ukrainian officers affirm that Russia wants to claim a big victory before the celebrations for the anniversary of the victory against Nazism on May 9.

As of today, exactly two months into the war, Ukraine still holds much of its positions against the Russians in the East, keeps the Russians out of their Capital province, pushes them out of the Black Sea region of Kherson, and holds the Azovstal stronghold in Mariupol. Looking into the future Naryzhna voiced what Zelenskyy said a couple days ago “Western support is what keeps the Ukrainians fighting. You give us hope.”