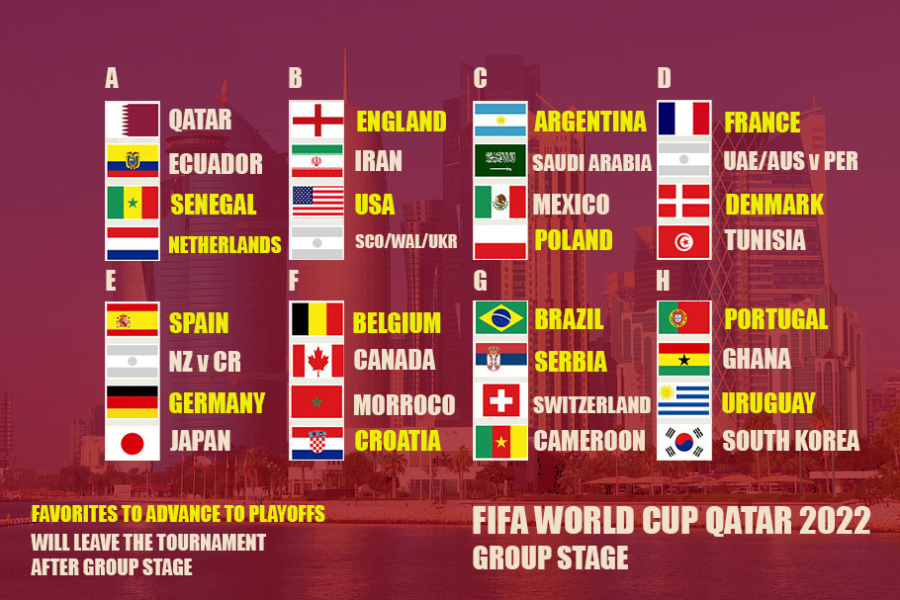 This year’s competition is marked by the absences of Italy, Nigeria and Chile national teams.

Beginning at the 1970 Mexico FIFA World Cup, there has always been a “group of the death” in the competition. This is a group, denominated as such by specialists and journalists, that has many teams that are favored to win spots in the playoffs. These groups usually play the most dramatic games with one of the favorites out of competition as an usual outcome.

However, last week’s group draw in Doha — the capital of Qatar — brought relief to the heavyweights in the race to win the FIFA World Cup in 2022.There are exactly two clear favorites to advance to the playoff rounds in each of the eight groups.

This happened partly because of the friendly draw rules for the best seeded national teams but also because of the absence of many teams that usually compete with the top teams in FIFA ranking for a playoff spot. By tournament rules, the best two teams out of four make it to the playoffs; the rest are sent home.

The chart above shows which teams are the best seeded in the FIFA/Coca-Cola World Ranking and in what group they were placed. As of today, only two groups look competitive. Group E includes world champions Spain (7) and Germany (11), but they are joined by Japan (23) — not as strong lately — and the winner of the series between New Zealand (101) and Costa Rica (31). Costa Rica surprised the world of soccer by taking out powerhouses Italy and England in the group stage at the FIFA World Cup held in Brazil in 2014.

Group H might be the most complicated to forecast since it includes one former world champion and multiple-time protagonist Uruguay, a favorite to advance to playoffs, but this group also has Cristiano Ronaldo’s Portugal. The Portuguese superstar wants to retire with a big win after finally winning the Euro Cup, but Ghana, who usually advances to playoffs and has a powerful team with many players in the best European leagues, will oppose CR7’s — Ronaldo’s nickname in English — intentions.

The United States (15) and Mexico (9) will play in groups B and C respectively. The Americans could face a relatively easy “British” group where the strongest team is the 1966 champions and European powerhouse England, followed by Iran. Scotland and Wales are defining the other spot in the next few months if Ukraine is not able to assemble a team due to the war. The Americans are expected to have a breakthrough participation in this World Cup since they are organizing the 2026 tournament. The American team will be the youngest in the competition with a median age of 23.7 years old, and it also has many players in the best European leagues.

The Mexicans will face an uphill battle to advance to the playoffs. Irregular presentations in the Confederation of North, Central America and Caribbean Association Football qualifiers relegated them to second place after Canada (38), and the team had lost most of its games against teams that are similar to them in the FIFA/Coca-Cola Rankings. They should get a win against Saudi Arabia (39) but then will have complicated matches against superstar Robert Lewandowski’s Poland (22), that qualified in a difficult European group, and Argentina, that comes into the competition uplifted by its huge Copa America victory against Brazil in the finals and wants the best player in the world, Leo Messi, to bring the trophy home in his last chance to do it.

The most noted absence in the draw was Italy (6). The two-time world champions lost their chances to move on to Qatar 2022 when North Macedonian (67) Aleksandar Trajkovsky scored a well-placed long shot goal at the 92 minute mark that decided an incredible second round of qualification game.

The Azzurri’s forward Domenico Berardi became the match villain after missing at least three clear chances in front of the goal before the Balkanics scored in the last seconds of the match.

Colombia (17) and Chile(28), two of the best-ranked South American national teams, will also watch the World Cup on the TV. Colombia had an irregular qualifier plagued by many ties — eight out of 20 games — and changes of coaches. Chile’s national team, one of the power houses of Latin American soccer, is going through a generational transition that did not allow for the team to accrue enough points in the elimination rounds.

Nigeria(30), one of the most consistent teams in Africa, and an usual upsetter of favorites, lost its ticket to Qatar 2022 after goalkeeper Francis Uzoho failed to dominate a frontal, easy shot from Ghanaian (60) midfielder Thomas Partey and gave away a goal that trashed Nigerians’ hopes to secure the ticket at home.