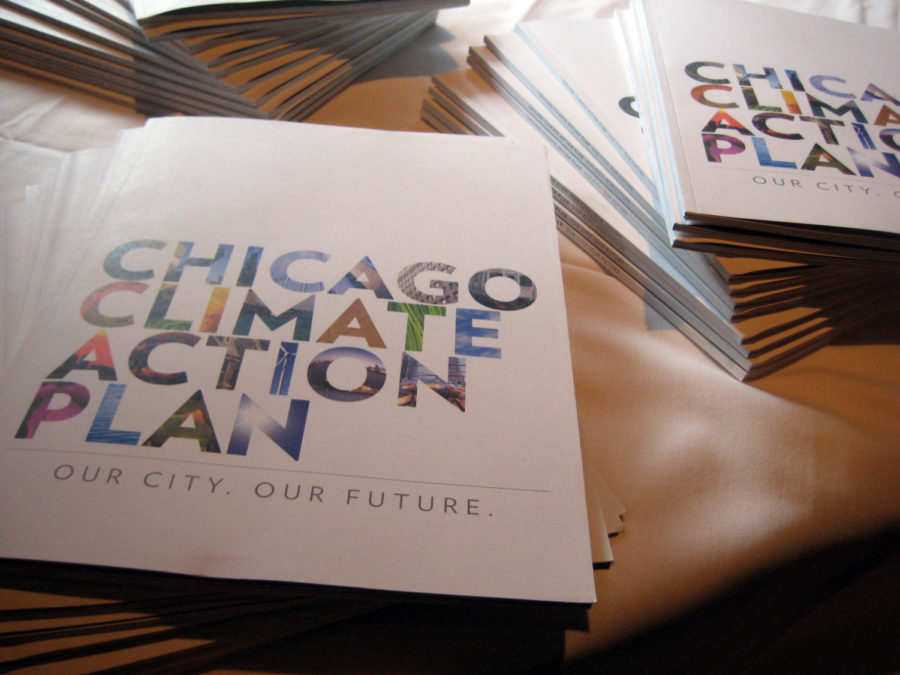 “As Chicago’s future leaders, we’ve already begun to inherit a world without clean air, with neighborhoods covered with pollution,” said Charlotte, a member of the Mayor’s Youth Commission. “And a city where people are disproportionately affected by climate change just based on where they live, work, or go to school.”

The goals of the meeting, laid out by Kyra Woods of the Mayor’s Office, were to share the climate action plan framework with all of the attendees, explain ways Chicagoans can inform the planning committee and hear what folks had to say in that regard.

According to Woods, the foremost principle of the plan was for it to be equitable and to be built around those who are the most vulnerable. Doing this would involve implementing solutions that are both technologically centered and nature based.

“When [technical solutions] are paired with processes or investments around land restoration and conservation, or better land use practices, we can actually have a very robust set of strategies to reduce our carbon emissions and our greater greenhouse gas emissions overall,” said Woods.

These strategies would be put in place to save money for both the city as well as its residents to advance environmental justice and to improve community health.

“Together with reducing carbon emissions, you see these as the four pillars to help guide our work [and] are the principles that we kept in mind, as we identified strategies to help meet certain goals,” Woods explained.

According to the U.S. Bureau of Labor Statistics, Chicago has on average paid more for electricity than the rest of the United States but less for utility gas over the last four years.

Part of the plan’s strategies to achieve its goals is to retrofit many of the existing buildings within Chicago. This means, rather than tear everything down and start from scratch, renovate the building to make it more energy efficient.

Coincidentally, this also happened to be the first strategy of the climate action plan laid out in 2008 under then-Mayor Richard M. Daley. The goal then was for Chicago to “achieve an 80 percent reduction below its 1990 Greenhouse gas emissions levels by the year 2050.”

The second strategy is to improve waste processing which includes three channels: commercial and industrial, construction and demolition and residential. Although it was not explained how that waste was going to be diverted.

“Gratefully, as part of the 2022 budget, there are already line items put aside to invest in the staffing on our side at the city, as well as the systems to get some of these newer programs up and running, and to further invest in existing systems that we have, such as recycling,” Woods said.

This happened to be an issue that many citizens in attendance took the most interest in. Anne Holcomb of the South Shore neighborhood was concerned about a combined disposal facility in her community.

“It’s a waste receptacle for Calumet River and Chicago River sledge that has a lot of toxic heavy metals,” said Holcomb. “It was supposed to be kept and turned over to the park district … and now they’re going back on that saying they’re going to actually expand it.”

Because it is right on the shores of Lake Michigan, it can become a major polluter, explained Holcomb. “Especially if we have rising lake levels like we did a couple years ago.”

As stated before, equitable planning is paramount in this planning process and makes up the third strategy. This would be done by collecting data using new or existing technologies and gathering community feedback to ensure that decisions are made with communities in mind.

“Given the impacts of the pandemic and how that all happened to all of us, we recognize more than ever that it is important to think critically about how we plan and invest across our city,” said Woods.

The last two strategies involve preparing for the future by shifting to 100 percent clean and renewable energy and decommissioning fossil fuels, as well as supporting clean and affordable transportation options. Since the ‘L’ is already electric, this speaks to the public bus system.

For those who wish to remain active, Chicago wants to increase the walking and biking networks.

Though this was just a draft of the 2022 climate action plan, a representative from the Mayor’s office said we should have a tentative release of the final plan in April.