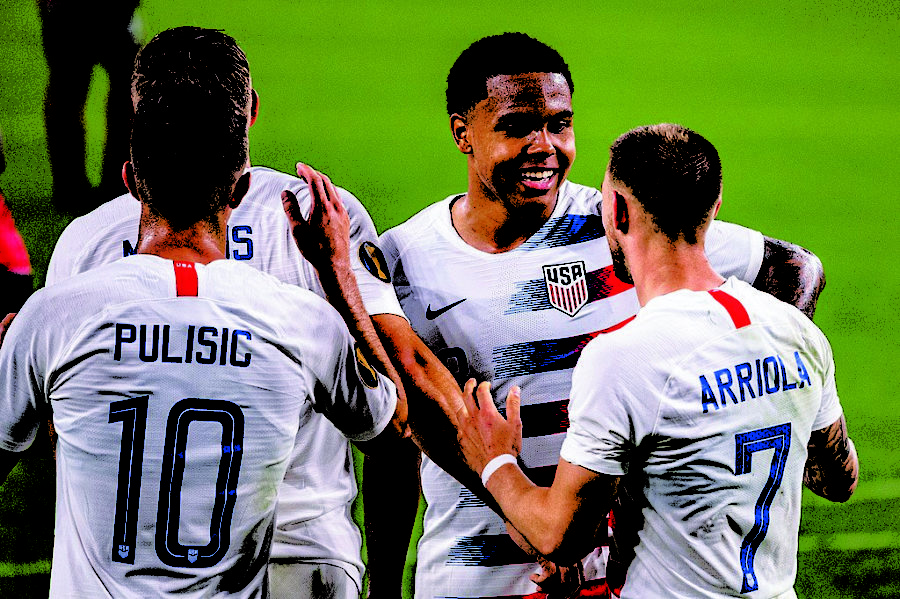 “El Tri” lost to the Americans for third consecutive game

Tickets for the USA vs Mexico soccer game held on Nov. 12 sold out weeks before the event. Usually, US soccer fans are outnumbered by Mexican supporters in locations like California, Texas or Chicago,but Cincinnati was expected to deliver a majority of American supporters. The noisy and loyal fans of the MLS home team did not disappoint USA’s Coach Gregg Berhalter.

The United States’ Men’s National Team (USMNT) did not disappoint the fans as Christian Pulisic and Weston McKennie scored and goalie Zach Steffen went unbeaten to defeat Mexico 2-0 this last Friday in the crowded, state-of-the-art TQL Stadium in Cincinnati, Ohio.

The 26,000 seats of the modern venue were mostly blanketed with blue, white and red. The American Outlaws — the USMNT officially supported fan club – joined together with local FC Cincinnati fans to support their team to take the first place of the CONCACAF qualifiers to next year’s World Cup in Qatar.

The first half started with rapid attack transitions by both teams. At the 11’  one of them ended in a long shot by Edson Alvarez that was blocked by Manchester City’s goalkeeper Zach Steffen in the bottom left corner.

Then, combinations between Napoli’s Hirving “Chuky” Lozano and Jesus “Tecatito” Corona in the 17’ and 30’ minutes ended in two more chances wasted by the visitors. The first one was saved again by Steffen when he stopped a close ranged shot to the bottom right by Lozano. Corona missed the second one after sending it off the goal of Lozano’s long cross from the right.

So far, the Americans had the control of the ball and created most of the chances, but “El Tri” (nickname of the Mexico soccer team) had figured how to punch harder in the offensive and keep the American attack restrained. None of the United States attackers had a clear chance to defeat Mexico’s 36-year-old veteran goalkeeper Guillermo Ochoa who had just declared before the game that “Mexico is the mirror in which the United States wants to see itself”.

The second half started with McKennie trying Ochoa at the 48’ with a powerful shot to the middle of the goal after connecting a cross from Salzburg’s Brenden Aaronson. The experienced America CF’s goalkeeper sent the ball off the crossbar.

The temperature of the game rose as the USMNT vied to beat Ochoa and a Mexican defense that repelled them by using any means necessary. At the 67’, right back Luis Rodriguez wrestled down Salzburg’s Aaronson to the pitch by pulling him down by the face. The incident started an altercation that lasted a couple minutes as the benches emptied and the players of both teams confronted each other.

This altercation was the continuation of a rivalry that has been enriched by the latest victories of the USMNT against their confederation rivals. US Soccer has been able to win more games than the Mexican side in the last decade and that is itching  the team from south of the border.

In the last two matches between the rivals the United States took home the CONCACAF Golden Cup and the Cup of Nations. In this game in Cincinnati, the confederation rivals were playing for the first place of the octagonal phase. The first three placers in this tournament go directly to the FIFA World Cup next year in Qatar.

Understanding the high stakes, US Coach Berhalter sent in at the 69’ Chelsea’s attacker Christian Pulisic, who, in four minutes, solved the Mexican defense’s puzzle by appearing out of nowhere inside the box and headed into the net a ball crossed by Tim Weah from the right side.

The Premier League player and top United States star displayed for the amusement of the elated fans at TQL stadium an undershirt with the message “MAN IN THE MIRROR”, alluding to Mexico’s goalkeeper’s comments before the game.

After Pulisic’s goal, Mexico’s national team crumbled in front of the eyes of their coach, the proven Argentinian Gerardo “Tata” Martino. But this has also happened to the many coaches the Mexican federation has put in charge of the team in the past five years.

McKeenie finally scored at the 84’ after collecting a rebound from the Mexican defense and placed the ball into the bottom left corner of Ochoa’s goal. Miles Robinson was sent out with a second yellow card at the 89’ after an unnecessary foul, but that did not affect the result of the game.

It was a well-deserved night for a team that usually plays with the attendance against them, even though they are locals. The top CONCACAF teams will meet again for the second leg of the CONCACAF octagonal in Mexico on March 24, 2022.