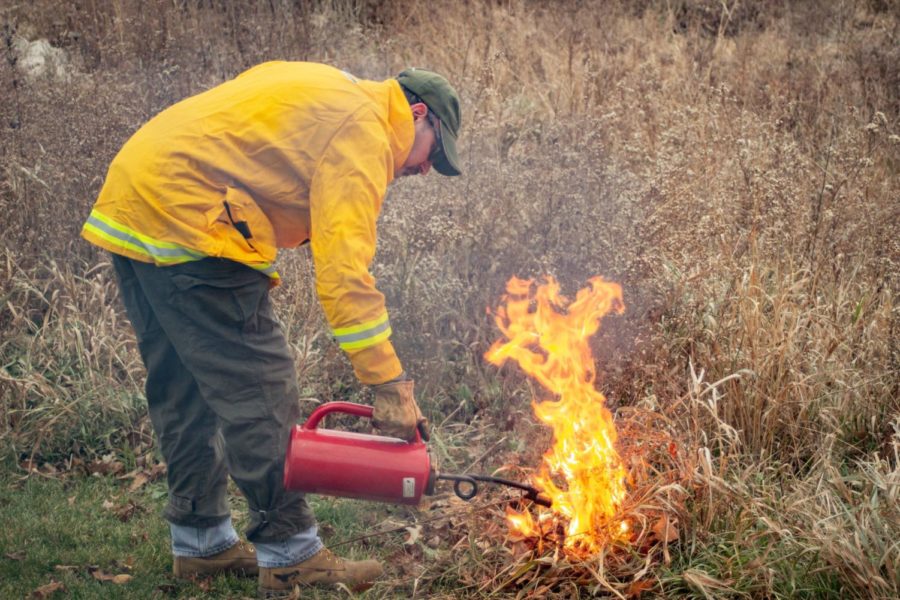 On the morning of Dec. 9, a group of volunteers, made up of faculty, staff and students of NEIU conducted a prescribed burn on the swamp white oak savannah areas near NEIU’s physical education complex.

An oak savannah is a lightly forested grassland wherein fire plays an important role. Before the settlement of Europeans in the region, fires set by lightning or Native Americans would ensure that the prairies to the west of the Mississippi wouldn’t turn into forests, like in the east.

Due to weather, time constraints and the pandemic, it was the first time that a burn was conducted since March 2018. Although, that isn’t to say that burns are only conducted when time isn’t a factor.

“Really, what we’re looking for is that the plants are dry,” said Dr. Alex Peimer. “So they need to have gone through their seasonal dieoff, their cessation.”

Peimer, an assistant professor in the Department of Geography and Environmental Studies (GES), said that there are only two times of the year that he’s seen the burn: the spring and the fall.

However, due to hydrology, one of those seasons might cause plants to be too wet to burn.

“The thing about the spring is we get a lot of rain in this part of the world,” Peimer said. “Most of our rain is between March and July. Then we get another chunk of it between September and October.”

Peimer, who also co-advises the Green Fee Committee, said that fires allow some species to grow by getting rid of the debris from the year prior and clearing the way for sunlight to reach shoots and uproots.

“We don’t see what’s actually going on with that plant, said Peimer. “We only see like 30 percent of it.”

The majority of these plants are stored as energy in the root systems below the surface of the ground. They can often go 10 or 12 feet deep.

“These plants are designed to reshoot and regrow and the fire allowed for their cycle of use of energy.”

Other species even require heat and fire for their seeds to germinate. Dr. Steve Frankel of the biology department indicated that Carolina rose, goldenrod, bluestem, compass plant, monarda and bee balm are types of plants that grew upon the knoll adjacent the drainage basin.

According to Peimer, “A non-native invasive species is a species that is a plant or any organism that is outside of its normal … geographic range. And it is disruptive.”

For various reasons, these non-native species are able to thrive in this environment and they have characteristics that allow them to outcompete the native plants.

Because many of these non-native species have shorter root systems, they are not fire tolerant, so they are unable to recycle after a burn.

Normally, a fire would coincide with a class held in the GES or biology departments. Like many things this year, this burn was a little different.

Students of the department canvassed the neighborhood to let residents know that smoke would be billowing from the campus, so as not to worry.

Dan Milsky of the philosophy department was also there and included some sage words before the commencement of the burn.

Aside from the restorative work that burns can do for the land, Peimer feels that there is a bit more than meets the eye.

“This can transform people’s relationship with one another, and their campus or the nonhuman world,” Peimer said.

That might be a bit more attractive to students who aren’t typically involved in environmental activities on campus.

“The prairie burn, I think, is the fire that can keep NEIU going in a really special place.”