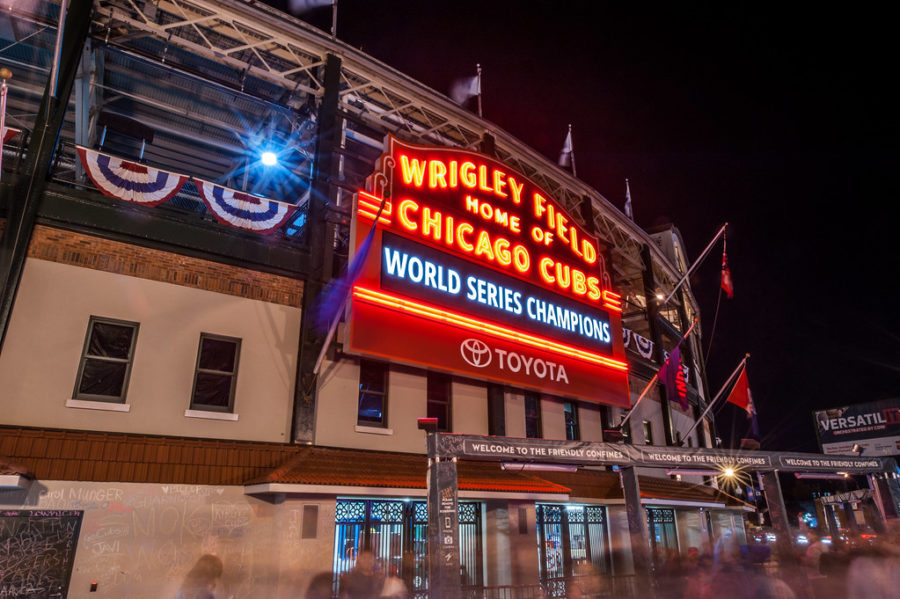 Wrigley Field proudly manifested the Cubs’ achievement during that sweet in October 2016.

The Chicago Cubs in 2016,  led by National League MVP (Most Valuable Player) Kris Bryant as well as star players Anthony Rizzo, Javier Baez and Wilson Contreras,  broke a 108-year drought by defeating the Cleveland Indians in the  World Series Championship.

Kris Bryant had a batting average of .292, hit 39 home runs and drove in a career high 102 RBI’s (Runs Batted In) .Anthony Rizzo batted .292, with 32 home runs and 109 RBIs. Javier Baez in his second full year in the Majors hit .273, knocking out 14 home runs while driving in 59 runs along with spectacular defense as well as hustle plays.

However, despite a six year stretch of successes unseen by the Cubs in over 100 years the Northsiders were unable to repeat their 2016 feat. . The  next year the Cubs won 92 games and made their third straight National League Championship Series. However, they lost to the Los Angeles Dodgers 4 games to 1.

During the 2017-2018 offseason Jake Arrieta was traded to the Philadelphia Phillies. In 2018, The Cubs won 95 games, but were unable to hold a five-game division lead over the Milwaukee Brewers in the final month of the season.

The Cubs and Brewers finished tied for the National League (NL) Central Division title. The Cubs would have two chances to advance to the NL Division Series. They first lost the NL Central tiebreaker game and then lost the NL Wild Card game to the Colorado Rockies. In those two games the Cubs managed to only score 2 runs in 22 innings of baseball.

After the disappointing end to the 2018 season; fans and baseball experts believed that the Cubs front office needed to make changes to the roster. However, all the Cubs management did was release Addison Russell and sign starting Pitcher Yu Darvish. In 2019 the Cubs were leading the wild card race with two weeks left in the season before a nine-game losing streak caused them to miss the playoffs.

Once again fans and experts thought the Cubs management needed to make changes to the roster and once again the Cubs front office failed to do so. The Cubs started the Covid-shortened 2020 season with 13 wins and 3 losses. The rest of the season they won only 21 games and lost 23 but still managed to win the division. Once they got to the playoffs, they were eliminated in the first round 2 games to none by a Miami Marlins team that barely qualified for the postseason. Once again, offense was a problem as they only scored one run combined in the two games.

During the offseason there was a ton of chatter that the Cubs core players from the 2016 team were going to be traded. However, Cubs management decided to take one more shot with Bryant, Rizzo, Baez and Contreras. They even brought back pitcher Jake Arrieta. The Cubs started off the season well with a 38-27 record and were tied with the Brewers for the first place in the Central Division.

Cubs fans were distraught seeing their favorite players leave and blamed management for not putting better players around the core of the team. However, very few fans or baseball experts focused on the declining productivity by those core players as a cause for the team’s downfall.

In 2019 Kris Bryant’s statistics were better than the previous year, but nowhere near his MVP year of 2016. Javier Baez put up solid numbers, but nowhere near as good as the year he had in 2018. Also, for the first time since the 2014 season Rizzo failed to drive in 100 runs.

There is no question that the Cubs front office deserves some blame in the demise and breakup of the 2016 Championship team. However, had the core players kept up their production from the 2016 team; the core wouldn’t have had to be broken up in the first place.