Commentary on political image. “The metamorphosis of Greg Abbott” 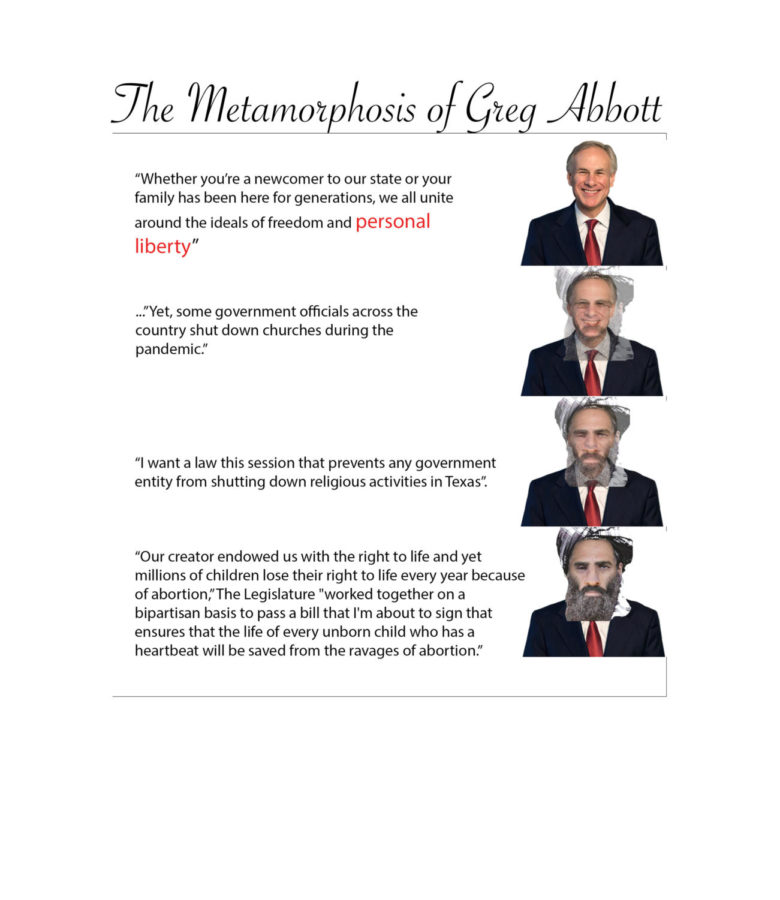 Texas’ Governor Greg Abbott was never shy about his intentions to embrace policies promoted by the most radical members of his constituency.

By signing into law a bill that virtually banned the possibility for women in Texas to get a safe abortion, Abbott just took the Lone Star state another step backwards.

In his State of the State speech from February of this year,  Gov. Greg Abott dared to say that Texas respects personal liberty. Then three months later, he signed a law that caters to the interests of religious groups, but to the detriment of public interest and women’s agency over their own bodies.

Only in regimes like the one imposed by Mullah Omar in Afghanistan are women mistreated in such a way and the freedom of choice over their bodies is so severely restricted.

Waheedullah Hashimi, a Taliban leader, told Reuters a few days after the Taliban take over that “Our ulema (religious scholars) will decide whether girls are allowed to go to school or not”, he also said that “They (the ulemas) will decide whether they should wear hijab, burqa, or only (a) veil plus abaya or something, or not. That is up to them.”

There are no female ulemas. As in Texas, decisions made about the freedom of women are primarily if not exclusively taken also by men, who listen faithfully to their religious leaders.

These kinds of violations of women’s rights are becoming law within many states. Which is stunning, the United States invests trillions of dollars fighting religious extremism abroad, but lets it flourish on its own field, abetted by its own politicians.