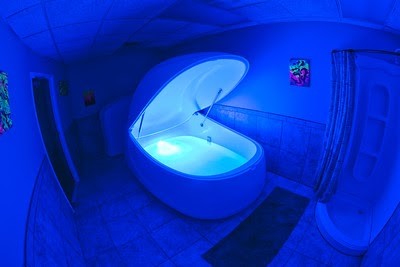 “Genesis Float Pod” by garrett.frandsen is licensed under CC BY-NC-SA 2.0 ( )

“Genesis Float Pod” by garrett.frandsen is licensed under CC BY-NC-SA 2.0

A tale of ridding the body of its stress

Recently, I again had the pleasure of being totally deprived of my senses. An absence of color illuminated my vision. My body was weightless and felt as if I was floating in some nebulous structure. Not a scent permeated by olfactory receptors nor a sound resonated in my ear canal. Even with all that salt in such a confined space, none of it hits your nostrils. To put it simply, I felt nothing. But that nothingness felt extraordinary.

What was it that caused me to speak so sensorily? This pleasure is due in part to a sensory deprivation tank. Some of you may be familiar with this, but I would bet many of you are not. As the name suggests it is a tank filled with water and 1,200 pounds of salt, creating the weightless sensation I mentioned earlier. This salt emulates actual salt water and if any of you have ever had the chance to experience sea water, it is largely the same thing.

The tank itself is about eight feet long; more than enough to fully spread out comfortably. Depending on the tank, as there are many variations, they are usually about four feet wide. Tank depths vary and this one was about a foot. When entering about half my calf submerged. Again, depending on the tank there may be a door that completely blocks out any sort of light or there may be a glass door that lets in a little if you are uncomfortable with utter darkness. For those who are uncomfortable in complete darkness there are tanks with windows and sometimes even lights inside.

The first time I had the incredible experience of floating was six years ago at Space Time Tanks on Lincoln Avenue. Sadly, it no longer operates.. During that time I had been practicing a fair amount of Buddhism and meditation and entering the tank induced a seemingly transcendental experience. I had the feeling of departing from a warm grotto, casting off and slowly drifting out to sea. This might sound like a cliché, but if the shoe fits, wear it. I am unsure as to why it took me years to return to the tank, but so it goes.

This time around was markedly different. I don’t practice Buddhism as much and I still meditate from time to time, but nowhere near the amount I was in 2015. This year I took my girlfriend for her first time floating as a birthday gift and because our birthdays are only three weeks apart I also took a float. According to the receptionist at Float Sixty, 303 W Erie St., we were the first guests that day, which I initially thought odd, but she later explained that it was a deep cleaning day. I took that to be somewhat metaphorical, as we are both students working full-time jobs and overburdened by stress this float would provide our own “deep clean.”

You may be wondering what I mean. Well, let me elaborate. First, you must shower before you get in the tank. No one wants to lie in the same water someone else previously had. Second, once you get in and close the door behind you the nothingness starts. Your body soon begins to adapt to its environment. Devoid of light and color, one focuses on whatever the mind may present. Personally, I witnessed an almost euphoric array of colors fill the absence. Without sound, one can only hear themself think and soon, even your thoughts become silent. Lying on 1,200 pounds of saltwater, your body seems nonexistent. The experience of joint or muscle tension disappears in this water. Lastly, even with all that salt in such a confined space, none of it hits your nostrils.

This is what I mean by a deep clean. Your stresses, both mental and physical, dissipate in the tank.

Float Sixty’s first-time customer charge is $60 for one hour, a price I wholeheartedly believe to be worth it. After that, it is $90 per hour. That is a little spendy, so I thought okay, that was a one-time deal. However, Ally, the receptionist informed us that there is a student membership. For $30 a month you receive one float. But if you don’t use it in that month, then it will roll over to the next month. So for instance, you pay $30 for four months, but were never able to go. The fifth month rolls around and you can go once a week and not pay a thing because you paid the four previous months. Even still, $30 can be well out of some people’s budgets. But think of all the things that you would normally spend $30 on. To alleviate your mind and body from daily stress once a month definitely justifies allotting that sum.

After finishing my float and waiting for my girlfriend to finish her’s, I saw a Chicagoan Wall of Fame in the lobby. It was littered with current and former Blackhawks like Jonathan Toews, Daniel Carcillo and Jeremy Roenick among others. That alone is a testament to how great floating is. If professional athletes are coming to alleviate their stress and aches, you may want to as well.

One large difference between this float and my first was that I was completely deprived of every sense the first time. On this float I could hear the motors of the jets inside the tank when my ears were submerged. Coming from my first experience this was actually quite displeasing. Afterward I talked shop with Ally and she showed me all the different tanks in the facility. The last one I was shown was the same as the one I had first floated in. The Samadhi, as it is called, looks like a giant ice chest and take my word, is what you want to experience if you choose to go. Although, all variations are available for different rates.

The sound of the motors was not enough to deter me from going again. Float Sixty was offering a Valentine’s Day special that we definitely jumped on and I am sure after that expires we’ll jump on the student membership. I, for one, can use a little break from life’s daily stresses from time to time and, personally, floating is the best way to do it.