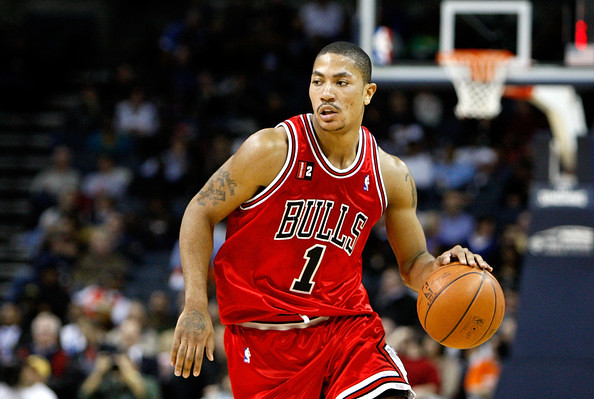 The rise, fall and resurrection of Derrick Rose

It may be difficult to believe now, but when the Chicago Bulls drafted Derrick Rose with the first overall selection of the 2008 draft, he wasn’t the consensus top prospect. In fact, many draft analysts considered Kansas State’s Michael Beasley–the 6-foot-9, 235-pound power forward who averaged 26.2 points per game (ppg) and 12.4 rebounds per game (rpg) during his sole collegiate season–as the safer choice.

Despite momentary uncertainty, the Bulls chose the homegrown kid out of the University of Memphis with the franchise’s first top overall selection since taking Elton Brand to kick off the 1999 draft.

From the moment he stepped on an NBA court, Rose brimmed with extraordinary potential. A big-bodied guard able to slash on a dime, Rose bullied his way to the basket at will, creating a matchup nightmare for defenders of varying sizes.

During his rookie season, Rose finished second among rookies with 16.8 ppg and first with 6.3 assists per game (apg) en route to becoming the Bulls’ first Rookie of the Year recipient since Brand co-won the award alongside Steve Francis in 2000.

By Rose’s second season, he was an All-Star reserve. By year three, Rose, then 22 years old, became the youngest MVP in NBA history.

The sky was the limit for Rose, both literally and figuratively. Heading into the 2012 NBA Playoffs, the Bulls boasted a 50-16 record, tied for best in the NBA. While general manager Gar Forman constructed a well-balanced roster–Carlos Boozer, Luol Deng and Joakim Noah formed a nice supporting cast while the Bulls’ “bench mob” suffocated opposing reserve units–no one doubted that the Bulls were Rose’s team.

The Bulls clashed with the eighth-seeded Philadelphia 76ers in the opening round of the 2012 NBA Playoffs. With his team up by 12 points late in the fourth quarter, Rose galloped into the lane, sidestepping 76ers center Spencer Hawes with an educated precision.

Rose’s breakneck style of play was unsurprising–there’s a reason the Chicago native entered the playoffs as the NBA’s reigning MVP. Instead, it was head coach Tom Thibodeau’s decision to play his starting unit during an out-of-reach contest with less than 1:30 remaining that stimulated heated debate among NBA analysts, who described the reigning NBA Coach of the Year as reckless, rigid and short-sighted.

The image of Rose collapsing to the ground remains engraved in NBA lore. In one fell swoop, an emerging NBA dynasty–the Bulls entered the 2012 NBA Playoffs as the Eastern Conference’s top seed for the second consecutive season–crumbled alongside its valiant leader, forever abandoned in a graveyard of “what-ifs.”

Rose sat out the entire 2012-13 season, vigorously rehabilitating a torn ACL in his left knee. While the galvanized Bulls surged to the Eastern Conference’s fifth seed behind Noah’s top-12 MVP finish, the once-daunting Bulls offense limped to 104.3 offensive rating, good for 23rd in the league.

Sure, the Bulls retained the same defensive tenacity that propelled them during their brief reign atop the Eastern Conference standings, but a team comprised of complementary pieces predictably failed to replace Rose’s formidable offensive contributions.

By the time Rose returned for an opening night tilt against LeBron James and the reigning champion Miami Heat, fans of Chicago basketball salivated at the prospect of the Bulls resuming their abbreviated run atop the basketball world. After all, advancements in medicine rendered the once career-threatening ACL injury a setback rather than a death knell.

However, Rose returned a different player. While the Simeon Academy alum produced an inoffensive stat line–Rose scored in double figures in each of his first 10 games back from injury–his efficiency plummeted.

Once celebrated for his tantalizing speed and ability to feather his way to the basket, Rose appeared content assuming the role of a three-point specialist, a task the then-31% three-point shooter was ill-suited for. Across his first 10 contests back from injury, Rose jacked up 47 three-point attempts while converting a respectable-if-unspectacular 36%, a figure inflated by a 6-for-11 performance during a 16-point victory against the Indiana Pacers.

Within a few weeks, the motives behind Rose’s tentativeness became apparent.

On Nov. 23, Bulls officials confirmed that Rose required surgery to repair a torn medial meniscus in his right knee, mandating a second indefinite hiatus for the former MVP. Chicago basketball fans were torn between ejecting a collective sigh of relief that the injury was unrelated to his surgically-repaired left knee and slandering the basketball gods for recalling Rose for the second time in as many seasons.

Despite early projections forecasting a return for the 2013-14 NBA Playoffs, Rose sat out the remainder of the season.

While it may seem immature with the benefit of retrospect, Bulls fans began criticizing their oft-maligned point guard, openly challenging his decision to abandon his outclassed team during their tauntingly brief playoff run.

Uncharacteristically high scoring outputs from Mike Dunleavy and Taj Gibson–who scored 35 and 32 points in games three and four of the Bulls first-round series, respectively–couldn’t prevent the Bulls from bowing out in five games to the fourth-seeded Washington Wizards.

Despite the Bulls improbable return to the playoffs, the stakes felt low, inconsistent with the suspense that accompanied Rose-led playoff rosters. The rabid energy once permeating throughout the United Center conceded to reluctant resignation as playoff games transformed from opportunity to formality. As a result, Bulls fans prepared for the future, impatiently awaiting the return of Chicago’s basketball hero.

They never got it.

A second torn meniscus in Rose’s right knee limited the three-time All-Star to 51 games during the 2014-15 NBA regular season. While Rose regained a semblance of his past explosiveness, the darting expeditions to the rim that highlighted Rose’s MVP campaign yielded to gentle floaters and pull-up jumpers.

Rose finished the season averaging a respectable 17.7 ppg and 4.9 apg, but the conviction that once allowed Rose to dictate the pace of the game devolved into a tormenting memory.

Furthermore, while Rose averaged 20.3 ppg on the strength of three separate 30-point outings during that year’s playoffs, he did so on a paltry 39% shooting. More importantly, he failed the eye test. Once considered an equal to the very best the game had to offer, Rose looked and felt like a subordinate to LeBron James.

After another inconsistent season that saw a collection of minor injuries cost Rose 16 regular-season contests, the Bulls cut their losses, shipping Rose to the New York Knicks alongside Justin Holiday in exchange for Jerian Grant, Jose Calderon and Robin Lopez.

While the Bulls received three productive seasons from Lopez, the move primarily operated as a way to circumvent the developing on-court incompatibilities between Rose and budding All-Star Jimmy Butler. Once the hometown hero capable of rallying a city that hadn’t experienced sustained basketball success since Michael Jordan’s second retirement, Rose became expendable.

While with the Knicks, Rose found himself in the proverbial no man’s land, good enough to counteract the franchise’s tanking efforts but no longer capable of elevating a desolate franchise to playoff contention.

After averaging 18 ppg on an efficient 47.1% shooting for the 31-51 Knicks, Rose signed with the Cleveland Cavaliers, where he occupied a backup role for a team carrying title aspirations. While the move gutted Chicago fans jealously guarding a city-wide vendetta against James, the agreement appeared to be an ideal fit for an oft-injured, score-first point guard struggling to rediscover the magic that once made him one of the league’s most feared floor generals.

The Cavs, in the midst of irresponsibly stockpiling veteran talent in an effort to compete with the vaunted Golden State Warriors, signed Rose absent an idea of how to utilize his skill set. After a 16-game stint that saw the former MVP average a career-low 9.8 ppg, Rose committed to a self-imposed hiatus after physicians discovered bone spurs in his left ankle.

Fatigued by a seemingly indefinite rehabilitation stint, Rose elected to take time away from the Cavs to evaluate his basketball future. At the time, ESPN’s Adrian Wojnarowski reported that Rose was “tired of being hurt, and it’s taking a toll on him mentally.”

The 2017-18 season served as an inorganic conclusion for a player once anointed the league’s next great point guard. Opposing fans abandoned hostilities when Rose took the court, commencing what felt like a premature retirement tour for a player whose body refused to cooperate with his lofty ambitions.

In what felt like a bittersweet acceptance of the barbarous volatility hovering above every athletic endeavor, the league appeared primed to move forward without its former MVP, ready to banish Rose to the shadowy depths of its subconscious. Some even joked that Rose’s legacy would mutate into an obscure trivia question.

“Hey here’s one for ya! Who’s the only MVP not elected to the NBA Hall of Fame?”

Yet Rose wrested his legacy from the clutches of NBA ridicule. Starting his first game in just under a full calendar year for the Minnesota Timberwolves, Rose exploded for 50 points during a Halloween-night victory against the Utah Jazz. Between Oct. 31 and Nov. 24, Rose recaptured the savviness that once rendered him unguardable, averaging 24.8 points over a 10-game stretch that culminated with a 24-point, 8-assist outing against the Bulls.

That night, the Chicago faithful showered Rose with “M-V-P” chants.

While Rose failed to win Player of the Month honors–that award went to Tobias Harris of the Los Angeles Clippers–the confidence and joy that underscored Rose’s time in Chicago glistened with every smile, a sight painfully absent throughout the preceding years.

Over the next few seasons, Rose escaped rock bottom as he adapted to his body’s limitations. During the 2018-19 season, Rose scored his 10,000th point. Five days later, Rose scored 29 second-half points to spearhead a late comeback against the Phoenix Suns, scoring the game-winning field goal with 0.8 seconds left in the game.

Thanking his teammates for retaining their trust in him, Rose’s post-game interview operated as a microcosm of the trials and frustrations that plagued his career.

“I missed a lot,” said Rose after the game. “It was all up to my teammates and the coaches for giving me that confidence, putting the ball in my hands and just believing in me.”

This past offseason, Rose joined the Detroit Pistons, where he averaged over 18 ppg for the second consecutive season. Before the novel coronavirus COVID-19 pandemic forced the NBA to indefinitely suspend its regular season, Rose etched his name in the franchise record books, becoming the first Pistons reserve to record seven consecutive games of at least 20 points or more while matching his career-high with 14 straight 20-point outings.

It’s hard to say how long Rose can sustain his newfound prosperity. Perhaps his consecutive 18-ppg campaigns are just a flash in the pan meant to reignite memories of MVP days. Perhaps the cruelties of human frailty subsided just long enough to provide an embattled superstar with closure.

However, what can be said is that the NBA once left Derrick Rose for dead. Two years later, sheer passion for the game of basketball combined with an inflexible resolve to adrenalize the NBA’s once-forgotten son.