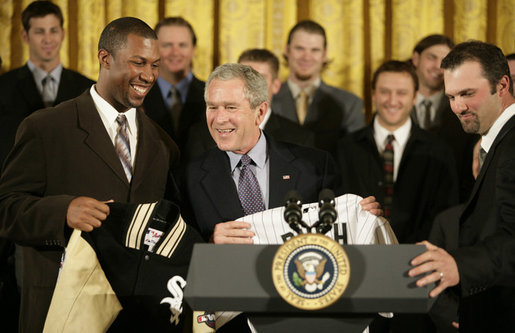 After a painful rebuild that saw the White Sox limp to a 100-loss campaign two seasons ago, the Pale Hose appear primed for a return to postseason contention. Unfortunately, a novel pandemic postponed the resurgent Sox’ breakout campaign.

Nevertheless, sports fans can’t appreciate the light without experiencing the dark, which Chicago baseball fans collectively experienced quite a bit of. The NEIU Independent lists the six greatest draft-day disappointments of the past 15 years.

For the most fleeting of moments, it appeared the White Sox found Joe Crede’s heir apparent at third base. As a 24-year-old rookie, Josh Fields launched 24 home runs to go along with 67 RBIs, propelling the Oklahoma State product to a seventh-place finish in Rookie of the Year Award voting.

Unfortunately, once Crede returned from injury to reclaim his position as the White Sox’ starting third baseman, the Sox reassigned Fields to Triple-A, subsequently derailing his momentum. In an injury-plagued season with the Charlotte Knights, Fields suffered through a startling regression as he labored to a .246 batting average, only two points higher than the .244 effort he put up in the major leagues the previous season.

The White Sox nabbed right-hander Lance Broadway from Texas Christian University with the 15th pick in the 2005 MLB Draft.

At the time, the reigning Conference USA Male Athlete of Year seemed like a can’t-miss prospect, finishing his lone season at TCU with a 15-1 record and a 1.62 ERA.

The early signs appeared promising for Broadway, whose rapid ascent through the Sox’ minor league system saw him pitch to a 2.74 ERA at Double-A Birmingham during his age-22 season. By the time he was 23 years old, Broadway cracked the major league roster, shutting hitters down to the tune of a 0.87 ERA across 10.1 innings.

Unfortunately, Broadway couldn’t replicate his success. In 2004, the righty saw his ERA balloon to an unsightly 7.07. A year later, the Sox traded Broadway to the Mets for catcher Ramon Castro and cash considerations.

In the 2009 MLB Draft, the White Sox selected College World Series hero Jared Mitchell with the No. 24 selection, two spots ahead of perennial All-Star and future Hall of Famer Mike Trout.

The former two-sport National Champion out of Louisiana State University–Mitchell also won the BCS National Championship as a wide receiver during his freshman year in college–started his professional career at Single-A Kannapolis, hitting .296 over 115 at-bats.

However, a torn tendon in Mitchell’s left ankle cost him the entire 2010 season, irreparably stunting his momentum. Between 2011 and 2013, Mitchell pinballed throughout the Sox minor-league system. After ambitious promotions that forced an already-overmatched Mitchell to face steeper competition, the White Sox’ released Mitchell in 2015.

While Mitchell eventually made it to Triple-A Charlotte, he never batted higher than .240 at any level after undergoing surgery to repair the torn tendon in his left ankle.

Gordon Beckham is an outlier on this list. Despite underperforming relative to his status as a former top-eight selection, Beckham managed to carve out an 11-year career, playing with the Detroit Tigers as recently as last season.

Like Mitchell, Beckham earned praise for leading the Georgia Bulldogs to the College World Series. Unlike his White Sox’ counterpart, Beckham accelerated through the minors, making his major league debut 364 days after the White Sox selected him with the No. 8 overall pick in the 2009 Draft.

Beckham impressed during his rookie campaign, displaying an uncanny ability to rope gap-bound line drives on a regular basis. Beckham’s 14 home runs, 63 RBIs and .270 batting average in 2009 earned him a top-five finish in the American League Rookie of the Year voting, though admittedly, none of the players finishing ahead of him–save for eventual Cy Young winner Rick Porcello–enjoyed much success.

Analysts began projecting Beckham as a future All-Star following a move to second base, a historically weak position from a hitting perspective. However, Beckham failed to rediscover his reliable bat stroke, laboring to a .234 batting average by his third season.

A power surge in 2012 saw Beckham hit a career-high 16 home runs, though his 234 batting average left a lot to be desired. Ironically enough, Beckham raised his batting average to .267 the very next season but experienced a power outage, hitting only five long balls.

Beckham stuck with the White Sox until 2014 before the team traded him for a player to be named later, which eventually turned into current Colorado Rockies’ pitcher Yency Almonte.

While Almonte never suited up for the White Sox, general manager Rick Hahn exchanged him for one-and-a-half productive seasons from reliever Tommy Kahnle.

The No. 13 overall draft pick in the 2012 MLB Draft, Hawkins is best remembered for his draft-day backflip. Eight years later, Hawkins serves as the poster child for Williams’ disastrous draft-day approach where he almost exclusively targeted premier athletes over polished baseball skill.

Hawkins–who’s now employed as Michigan State University’s wide receivers’ coach–rocketed through both rookie and Single-A ball before landing in Winston-Salem, where he plateaued for two seasons. After a successful 16-game stint in Kannapolis that saw Hawkins hit .308 with a blistering .983 OPS, Hawkins’s batting average dropped to .178 upon promotion to High-A Winston-Salem.

While Hawkins initially held his own after an aggressive promotion to Double-A Birmingham, Hawkins repeated the level for four consecutive seasons, eventually seeing his average drop to a paltry .120

Hawkins’ failures were eye-opening for a White Sox franchise criticized for its aggressive approach to prospect assignments. For a while, it appeared the Sox learned their lessons. Then they made the same mistake with….

Carson Fulmer is yet another College World Series hero rushed through the minors before faltering on the big stage. However, while it may be premature to label Fulmer a bust, the optimism once surrounding the right-hander out of Vanderbilt has since disappeared.

Despite being the third-rated prospect in the 2015 draft class, Fulmer fell to the Sox at No. 8 amid concerns surrounding his size and unorthodox delivery.

Still, the Vandy product possessed electric stuff, owning a fastball that once graded by MLB Pipeline as a 70 on a scale of 10-80. His knee-buckling breaking ball–MLB Pipeline rated his curveball a 60–served as his “out” pitch as both a closer and a starter, positioning Fulmer for a fruitful MLB career.

Like Beckham, Fulmer raced through the minors, making his MLB debut one year after the Sox drafted him, despite an elevated 4.63 ERA across Double-A and Triple-A.

An unsightly 8.63 ERA upon promotion to the big leagues killed Fulmer’s confidence, an issue continuing to plague his MLB potential today. Though a 3.86 ERA in an abbreviated big league stint in 2017 offered reason for hope, Fulmer failed to shake his difficulties with pitch command, instead traveling back and forth between the major and minor leagues throughout the duration of his career.

Across four partial major league seasons, Fulmer owns a 6.56 ERA. Unfortunately, he hasn’t fared much better in the minors, struggling to a 5.39 ERA over four seasons in Charlotte.

MLB Pipeline’s former No. 38 overall prospect is capable of getting hitters out when he has command of the strike zone. Unfortunately, those instances have been few and far between, as evidenced by his repulsive career 6.1 walks per nine innings (BB/9). For comparison’s sake, Dakota Hudson of the St. Louis Cardinals finished last among qualified pitchers last season with a 4.4 BB/9.

Before concerns surrounding the novel coronavirus COVID-19 forced an indefinite MLB hiatus, Fulmer reported a renewed focus on the mental aspect of his game. However, if Fulmer remains unable to rediscover the skill that once earned him college baseball’s National Pitcher of the Year Award, he’ll find himself ejected from the White Sox organization.