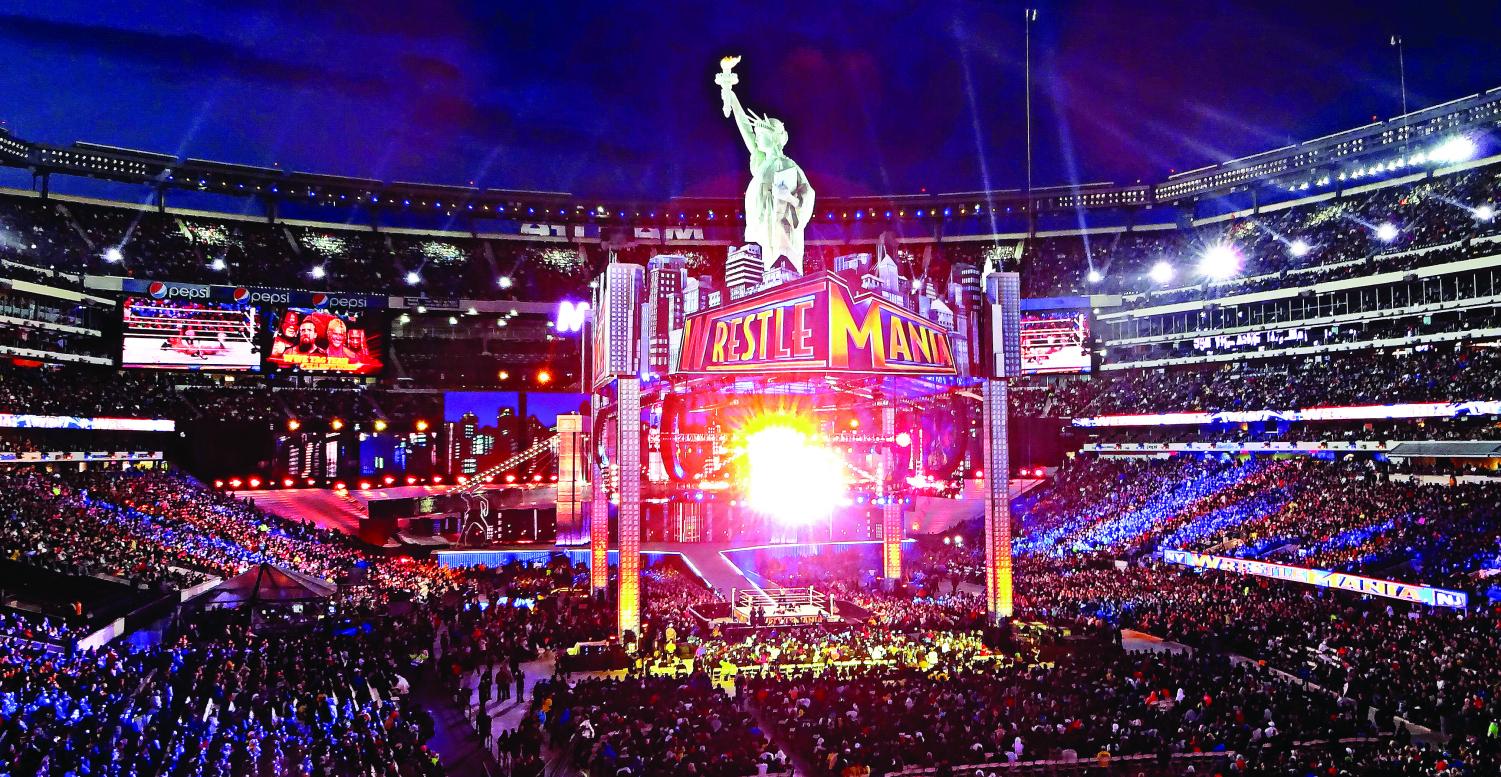 Compiling a subjective listing of the greatest matches in Wrestlemania history was quite a trying task. Many fantastic contests failed to crack the top 15, which is not meant to operate as an indictment on the performance put forth by the participating superstars, but rather as a testament to just how spectacular an event Wrestlemania has become.

Hopefully, this list will allow readers to revisit their fondest childhood memories while also celebrating the moments that had viewers glued to the edge of their seats during their formative years.

For those looking to start from the beginning, read part one and part two. For those already caught up, let’s take a look back on the greatest matches in Wrestlemania history.

Match Background: The blood feud between Randy Savage and Ricky Steamboat commenced when  Savage viciously attacked Steamboat, delivering an emphatic elbow that forced Steamboat’s throat into the guardrail. Savage then ascended to the top rope before driving the ring bell into Steamboat’s throat, kayfabe (or storyline) crushing his larynx. Six months later, their heated feud culminated at Wrestlemania III, with Steamboat looking to strip Savage of the Intercontinental Championship.

A subplot to the match: George “The Animal” Steele accompanied Steamboat to the ring after developing an unsettling crush on Savage’s valet, Miss Elizabeth.

What Made The Match Great: If one were to study professional wrestling content from the late 1980s and early 1990s, you would find yourself increasingly disenchanted with the painstakingly slow pace of the era. However, deviating away from the era’s norm, Steamboat and Savage delivered a contest that, even by today’s standards, was both brilliantly executed and fast-paced, incorporating an impressive blend of high-flying action and ground attacks to win over their audience.

Furthermore, in an era defined by cartoonish gimmicks and outlandish promos, it was refreshing to see a simplified feud that centered around nothing more than a seething hatred between two competitors and a championship belt.

However, outside of providing an exhilarating contest that left fans breathless, this bout is recognized for inspiring future generations. Former WWE and AEW Champion Chris Jericho cites this contest as the standard that future WWE superstars strive to not only replicate.

Steamboat would lose his IC Championship to the Honky Tonk Man on the June 3 edition of Superstars as real-life punishment for requesting time off to spend with his heavily-pregnant wife, who was expected to deliver the couple’s first child at any moment.

9. Triple H vs. The Undertaker; Hell In A Cell Match (Wrestlemania XVIII)

Match Background: After a ten-month hiatus following their brutal encounter at the previous year’s Wrestlemania, Undertaker resurfaced with the intent of challenging Triple H to a rematch. Enamored by the legacy of The Undertaker’s Wrestlemania winning streak, Triple H refused, claiming that preserving the streak was in the WWE’s best interest. Undertaker then taunted Triple H into accepting his proposal by comparing Triple H’s career to that of Shawn Michaels, whom The Undertaker defeated multiple times in high-profile contests. Triple H accepted the challenge, with Shawn Michaels volunteering to serve as special guest referee for the contest.

What Made The Match Great: Though billed the “End of an Era”, this match wouldn’t be the final match for either the Undertaker or Triple H. However, this match offered nostalgia, intrigue, brilliant in-ring execution and storytelling all within one 30-minute window.

Both men expertly teased the end of “The Streak,” introducing the idea of an overconfident Triple H from his real-life best friend Shawn Michaels (whom the Undertaker had repeatedly belittled in the build-up to the contest) serve as the special guest referee. As if that wasn’t sufficient cause for apprehension, the three performers left fans clutching at straws whenThe  Undertaker suffered a Sweet Chin Music transitioned into a Pedigree, only to kick out at what unofficially must be considered a two-and-three-quarters count. This match also featured brutality (both competitors mercilessly used a sledgehammer on one another), scarcely rivaled star power and an inordinate amount of jaw-dropping suspense. Following the contest, the post-match embrace between three of the most celebrated superstars of WWE’s most successful era was an iconic moment in itself. Simply put, it is impossible not to tip your cap to this performance.

Result and Aftermath: The Undertaker defeated Triple H via pinfall after leveling Triple H with a sledgehammer and a Tombstone Piledriver. Following the contest, Triple H settled into his role as Chief Operating Officer (COO) of WWE while the Undertaker went on his annual sabbatical until the following year’s Wrestlemania. Triple H returned to ring sooner, contesting Brock Lesnar at that year’s Summerslam pay-per-view.

Match Background: This legendary contest came to fruition a week after the Ultimate Warrior and Hulk Hogan crossed paths at the Royal Rumble, with Hogan stating that he needed to know whether Hulkamania was more potent than the Power of the Warrior (yes, kayfabe was in full swing back then). A week later, WWF President Jack Tunney announced the match as the main event of Wrestlemania VI, adding that each man would put his respective championship on the line.

What Made The Match Great: To fully appreciate this contest, viewers must adjust their expectations relative to the era in which the match took place. During the late 1980s/early 1990s, few superstars were able to match Hogan’s charisma and larger-than-life persona. However, once the Ultimate Warrior burst onto the scene, fans were left wondering whether Hogan had finally encountered his equal.

While this match was not as substandard as 1987’s Andre the Giant-Hulk Hogan clash, this contest would fail to crack a top-75 list of greatest Wrestlemania matches based on in-ring prowess alone.

Nevertheless, fans were invested in the outcome of this contest.  While the long-term implications of Warrior’s crowning moment didn’t pan out as WWE had probably hoped — this match was supposed to be an official passing of the torch– it did lend a genuinely iconic atmosphere to Wrestlemania VI.

Result and Aftermath: After avoiding a Hogan Leg Drop, The Ultimate Warrior executed a Big Splash that was just enough to keep Hogan down for the three count. After the match, Hogan presented the Ultimate Warrior with the WWF Championship as an outward sign of respect. As alluded to earlier, this match was supposed to be a passing of the torch. However, the relationship between Vince McMahon and the Ultimate Warrior soon disintegrated as back-and-forth disagreements eventually opened an irreparable fissure between the two men.

After a nine-month reign as WWE champion, The Ultimate Warrior lost his title to Sgt. Slaughter, who served as a transitional champion before dropping the title back to Hulk Hogan in the main event of Wrestlemania VII.

Match Background: The build up to the Triple Threat contest for the World Heavyweight Championship was both intriguing and convoluted. Chris Benoit, who had been performing on Smackdown!, earned his opportunity to challenge for the World Championship at Wrestlemania after defeating  the Big Show during the final elimination of that year’s Royal Rumble contest. However, the existing clause didn’t specify which championship the winner of the Royal Rumble must challenge for, creating a loophole for Benoit to compete for Raw’s greatest prize.

Meanwhile, Shawn Michaels — citing their 10-year rivalry — insisted that he deserved the opportunity to challenge Triple H at Wrestlemania. Taking the situation into his own hands, Michaels delivered a Sweet Chin Music to Benoit before signing his name on the contract. After a grudge match between Benoit and Michaels on the following Raw, “Sheriff” Stone Cold Steve Austin decided that Triple H would defend his title against both Michaels and Benoit.

What Made The Match Great: Despite the Triple Threat’s bad reputation, the three participants used the match stipulation to perfection, wrestling to an accelerated pace and adding an element of unpredictability. Blood poured from each competitor’s face as each delivered devastating maneuvers out of nowhere, battering every wrestler’s body. Additionally, while most multi-dimensional feuds see their appeal diminished from overbooking, this match benefited from its multidimensional nature: Benoit’s ferocious desire to claim his place atop WWE’s mountain fused with Michaels and Triple H’s long-standing rivalry, introducing a fresh aspect to the latter’s feud.

Furthermore, the match featured three of the greatest in-ring performers in WWE history, each with contrasting in-ring styles. Unfortunately, since the bout Benoit’s personal demons have completely overshadowed his moment in the sun, though that does not diminish the brilliance these three men delivered on this particular night.

Result and Aftermath: Chris Benoit denied Triple H’s bid to break the Crippler Crossface, forcing the champion to submit. Unfortunately, the sole highlight of Benoit’s reign as champion was his Wrestlemania victory, as Benoit embarked upon an underwhelming championship reign until he dropped the belt to Randy Orton at that year’s Summerslam. Following his title loss, WWE relegated Benoit to the midcard until the tragic murder-suicide that defines Benoit’s legacy.

Match Background: After winning the King of the Ring Tournament and delivering the infamous Austin 3:16 promo that propelled him to main event status, Stone Cold Steve Austin began taunting an inactive Bret Hart, verbally baiting Hart into accepting his challenge for that year’s Survivor Series. Though Bret Hart would reign supreme at Survivor Series after countering a Million Dollar Dream into an improvisational roll-up, their rivalry would continue at the 1997 Royal Rumble match, where Austin emerged victorious after re-entering the ring despite having been eliminated by Hart.

Nevertheless, Hart would overcome his disappointment the next month. At In Your House: Final Four, Hart secured the vacated WWF Championship in a Four Corners match against Austin, the Undertaker and Vader, only to have Austin cost him his title the following night to Sycho Sid.

What Made The Match Great: Though the King of the Ring promo was Austin’s coming out moment, the war between Austin and Hart at Wrestlemania XIII was undoubtedly Austin’s coming out match. Austin’s effort cemented him as both a future main-event talent and a cornerstone for WWE to build its next generation around. Despite portraying a heel, Austin’s gutsy performance earned the allegiance of both the live audience and viewers at home. From an in-ring standpoint, the action and storyline were brilliantly executed, with Austin using anything at his disposal while also providing fans with one of the most iconic moments in WWE history.

Bleeding profusely yet refusing to concede victory, Austin passed out in lieu of submitting. Austin’s resilience and determination set a rare “double turn” into motion, an occasion that only transpires when the audience is so enamored with the superstar portraying the heel that they organically anoint him or her a fan favorite, subsequently vilifying whoever the supposed babyface is.

Result and Aftermath: Hart applied his patented Sharpshooter, incapacitating Austin. As mentioned above, WWE used this development to execute the rare double turn, seeing Austin settle into his anti-hero babyface role as Hart transitioned into an anti-American heel. Austin and Hart continued their rivalry, albeit with a reversal of roles, throughout the remainder of the year with Hart reforming the Hart Foundation.

Hart later defeated the Undertaker for the WWF Championship before dropping the title to Shawn Michaels during the infamous Montreal Screwjob. Meanwhile, Austin’s face turn helped lead the WWF into the Attitude Era, highlighted by his blood feud against WWF Chairman Vince McMahon. The rest is history.