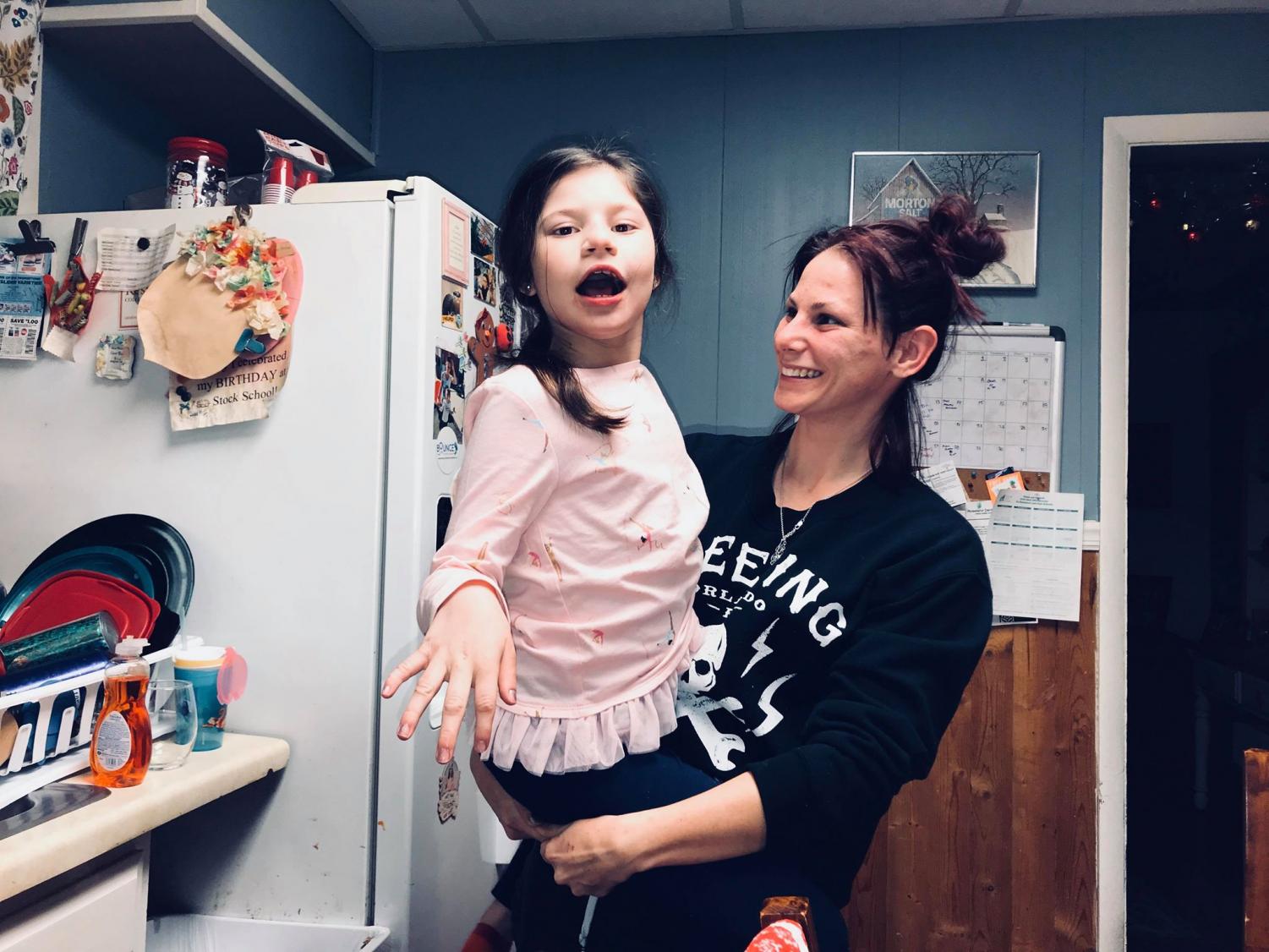 The struggle and miracle of Pitt Hopkins Syndrome

“A mother’s love knows no bounds.”

Such a phrase is often applied liberally, almost to the point of hyperbole. Oftentimes such praise is unearned, a preemptive compliment to describe conditional affection.

But imagine parenthood without the promise of reprieve. Envision coping with the understanding that, from a physical standpoint, your child may never progress beyond the limitations associated with the “terrible twos” or possess the motor skills to engage in conversation.

It’s a typical Tuesday night. Sydney Olita sits at the kitchen table in her family home, carefully carving a chicken quesadilla for her 10-year-old daughter Ari. Olita replaces the knife, assisting her daughter in transporting the meal from plate to mouth.

Olita is a firsthand witness to the everyday struggles her daughter faces. Ari, nicknamed “Bug,” suffers from Pitt-Hopkins Syndrome, a rare neurological disorder characterized by cognitive and developmental delays, learning disabilities and unique facial malformations, most noticeably a double curve of the upper lip.

Most patients diagnosed with Pitt-Hopkins Syndrome are unable to speak and struggle with mastering fine motor skills. Many suffer through epileptic seizures and inconsistencies in breathing patterns. According to the National Organization of Rare Diseases, only 500 men and women are impacted by Pitt-Hopkins worldwide.

Communication between Olita and her daughter isn’t transactional, at least not in the manner most are accustomed to. Olita asks pointed questions in hopes of deciphering her daughter’s wants and needs. While Ari has learned to say simple words like “yum” and “mom,” most of her communication is nonverbal.

Today, Ari is excited, fixated on the stranger interviewing her mother in their Chicago home. Unfortunately, Ari struggles to channel her excitement, reflexively striking herself in the head and scratching at the table until she earns her mother’s attention. After the meal, Olita retreats to change Ari’s diaper.

But according to Olita, this is a typical and relatively calm day for Ari.

Olita became suspicious of potential developmental delays when Ari was about three months old. “She wasn’t sitting up, she wasn’t holding her bottle,” said Olita, glancing down at the table. “She just wasn’t hitting her milestones.”

The diagnosis was initially difficult for Olita to cope with. According to Olita, she doesn’t remember much during that time period, though the forfeitures that followed remain at the forefront of her mind.

“You go into a grieving process,” said Olita. “You still have your baby; you didn’t lose anything. But you lost basically everything you thought you were going to go through, like a baby’s first steps, first words, walking. Half of that I still haven’t been able to experience. I was probably more angry than anything.”

Ari is completely reliant on her mother. Menial everyday tasks, such as brushing her teeth, using the washroom and bathing, are contingent on her mother’s assistance. According to Olita, even short commutes require advanced preparation and overpacking just in case Ari gets restless.

“There are times that it’s so bad that you just can’t function. You’re really not allowed to be human with a special needs kid. Most days, I’m so tired at the end of the day. But I still have to work and I still have to do what I have to do. It’s still very physically and mentally draining.”

But despite the harrowing bad days, Olita describes Ari as an inherently happy child. According to Olita, Ari sometimes succumbs to internal pains that she is unable to relay to her mother.

“The only time she’s not [laughing] is when she’s having sensory issues or stomach issues,” says Olita. “Something is always wrong, she’s not just doing it to be a brat. You can’t get mad at her because she can’t communicate. I think it’s more desperation to communicate.”

Olita has learned the importance of patience, particularly when caring for a child with a developmental handicap. In her caretaking capacity, Olita has suffered through a laundry list of injuries, including a chipped collarbone, an arm-length laceration and a lingering bruise on the inside of her thigh.

Unfortunately, the U.S. healthcare system isn’t as receptive to the needs of children affected by Pitt-Hopkins disease as one might hope, says Olita. Research on Pitt-Hopkins is disconcertingly limited. With only 500 affected worldwide, remarkably few studies have been dedicated to finding a cure or a way to alleviate symptoms. According to Olita, most of the pediatricians that she has encountered are unfamiliar with the disease or the conditions it fosters.

“Kids with Down syndrome, autism or other diagnoses have an easier time getting service because there’s more awareness about it,” said Olita. Alongside her sister Shelby, Olita continued by explaining that families impacted by Pitt-Hopkins tend to get overlooked due to lack of awareness and subsequent lack of emphasis.”

Olita has also experienced challenges in the social realm. Olita compares her experience with the word “retard” and its many variations to racial slander. Olita is also fatigued by the indignity of forced improvisation in order to provide her special needs daughter with the care she requires.

“I shouldn’t have to lay my kid on a bathroom floor to change her,” said Olita, before explaining that she’s been forced to change her daughter’s diaper everywhere from unoccupied rooms to the trunk of her car. Hospitals, malls and other public spaces oftentimes do not offer wide enough openings for Olita and Ari to enter the washroom.

But obtaining a semblance of normalcy begins by addressing the limitations of Pitt-Hopkins. Unfortunately, the scientific community cannot take forward strides toward normalcy until they are aware an issue exists.

While Pitt-Hopkins Syndrome awareness is still in its embryonic stages, hospitals solely dedicated to assisting Pitt-Hopkins patients have began to open across the country, including locations in Boston, San Francisco and Dallas. Olita says such a pointed emphasis serves as an enormous victory for the Pitt-Hopkins community.

However, despite the everyday duress and frustration that Olita experiences, she prefers Ari just the way she is. Constructing her own ideal narrative, Olita says that she would address the lack of accessibility for those in similar conditions rather than change the characteristics that make her daughter the vibrant, unpredictable 10 year old that she is.

A beaming Olita also shared the joys of raising Ari. While there’s no clear measurement for what might be considered a Pitt-Hopkins success, she readily offers the many anecdotes that afford reason for optimism.

One patient is an accomplished artist, able to clearly communicate using computerized means. Another patient was able to enjoy a beer with his family on his 21st birthday. Just last month, Ari was able to communicate a full sentence using sign language, which Olita categorized as a major accomplishment relative to where Ari lay in her developmental process.

And those small victories–the ones that most of us take for granted, imperceptible to the average person yet so rewarding for parents of children with Pitt-Hopkins–are what keep Olita going.

“It’s really, really great. Those little moments mean so much. The moments that normal parents take for granted. They are everything.”

Please visit PittHopkins.org to donate to the Pitt Hopkins Research Foundation. Any and all donations are greatly appreciated, with proceeds used exclusively to advance medical data on Pitt Hopkins Syndrome.

Opinion | The NFL must remove Michael Vick from the Pro Bowl