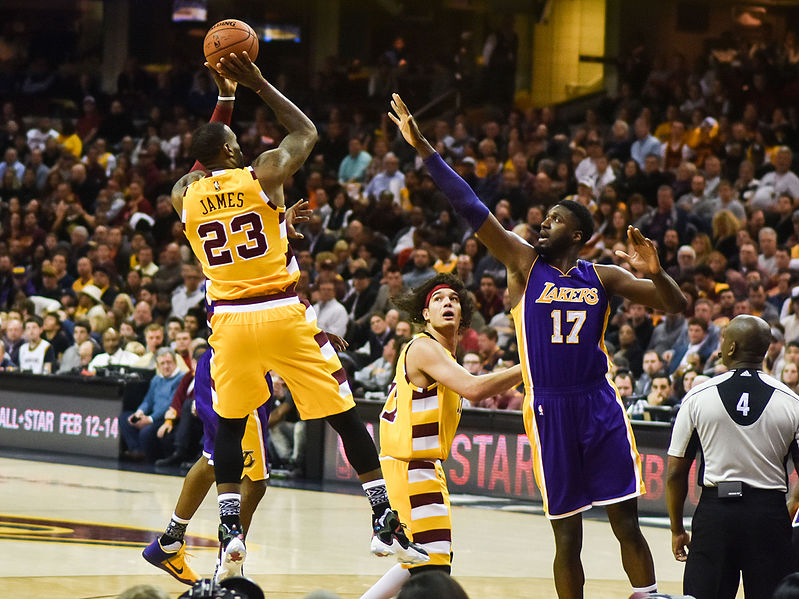 LeBron vs. Jordan: Settling the debate

Does LeBron’s career stack up to Jordan?

From the moment he was drafted first overall in the 2003 NBA Draft, it was apparent that LeBron James was a special talent. Anointed “King James,” James elevated a desolate Cleveland Cavaliers franchise to previously unseen heights, bringing a desperately needed credibility to a city that was mercilessly mocked for its athletic failures.

For a while, it seemed feasible that James may one day surpass Michael Jordan as the greatest basketball player of all time. After leading a barren Cavs roster featuring Mo Williams, Delonte West and an aging Zydrunas Ilgaukas to the 2007 NBA Finals, it seemed the NBA was James’s oyster. However, over the next few seasons, James found himself unable to replicate the success he enjoyed in 2007. Then he quit on the Cavs.

We all remember “The Decision,” the infamous sit down interview that saw James appear on national television to blindside and embarrass his hometown franchise. “I’ve decided to take my talents to South Beach,” said James, inviting immediate ridicule and bemusement. It was the day that James, regardless of future outcomes, conceded defeat.

In the following weeks, the city of Miami would host an unearned parade celebrating the arrival of James and Chris Bosh. They prematurely boasted that they would win “…not five, not six, not seven” titles, a goal that, with the benefit of retrospect, they fell embarrassingly short after only capturing two. You see, six championships is a Jordan accomplishment and James simply isn’t Jordan.

The 2010 free agency period altered the landscape of the NBA. In pursuit of his first NBA Championship, James manufactured a superteam featuring three surefire Hall of Famers (Dwayne Wade being the third) smack dab in the middle of their respective primes, subsequently rigging the league in the process. “The Decision” would end up having a domino effect, ending league parity in favor of the shameless pursuit of championships.

However, James’ fans still vehemently defend his legacy, claiming that a fourth, fifth and six championship would cement his legacy as greatest of all time.

To be fair, James’ tenure in Miami was undeniably successful. While donning a Heat jersey, James captured two championships (2011-12, 2012-13). However, despite such lofty accolades, James’ failures were equally as prevalent.

Alongside two perennial all-stars, James’ Heat lost the 2010-11 NBA Finals to a team spearheaded by Dirk Nowitzki, a 37-year-old Jason Kidd and a 15 point per game (ppg) Jason Terry. In 2013-14, the James-led Heat lost to an aging Spurs team featuring a 37-year-old Tim Duncan (15.1 ppg, 9.7 rebounds per game), a 33-year-old Tony Parker (16.7 ppg, 5.7 assists per game) and a 36-year-old Manu Ginobili (12.3 ppg, 4.3 apg). Once the Heat were no longer considered title favorites, James retreated back to Cleveland to form a second superteam alongside perennial All-Stars Kyrie Irving and Kevin Love.

Overall, James is 3-6 in the NBA Finals. While qualifying for nine straight NBA Finals is impressive in and of itself, the NBA is not a league that offers consolation prizes. You’re either the best or you’re not.

Furthermore, James was a beneficiary of a historically weak Eastern Conference. During James’ run atop the East, his fiercest competition was the Derrick Rose-led Chicago Bulls. Other than that, he was tasked with defeating the Al Horford/Jeff Teague Atlanta Hawks and the Paul George-led Indiana Pacers.

Embracing the inevitable comparisons, James has vocally expressed his desire to usurp Michael Jordan as the greatest of all time (G.O.A.T). While James has never been able to approach Jordan’s scoring abilities, he did manage to evolve his game to incorporate his passing ability, though critics contend that James’ desire to reinvent himself as a facilitator hurt his team and alienated teammates by taking the ball out of the hands of capable point guards like Irving.

When dissecting both Jordan and James’ stats, it’s really a matter of taste. By his age-34 season, Jordan averaged 31.5 ppg, 6.2 rpg, 5.3 apg and 2.3 steals per game (spg). At the same age, James averaged 27.2 ppg, 7.4 rpg, 7.2 apg and 1.6 spg. So if someone values scoring and defense over assisting and rebounding, they’ll likely prefer Jordan’s statistical output. If they value rebounding and assists, they’ll gravitate toward James.

However, what truly separates Jordan from James are the immeasurable qualities that propelled Jordan to the top and indefinitely kept him there until he voluntarily stepped down.

Jordan’s drive to win was unparalleled. In fact, his insatiable desire to not only defeat his opponents but also destroy their morale has become the stuff of legend. As ESPN’s Mike Greenberg stated during a debate over who would win a one-on-one game between Jordan and James, “Michael Jordan would either win or die on the court in that game, whereas LeBron might lose and then hug him.. Michael Jordan is either going to win that game or he is going to be carried off.” That will to win is why Jordan, who stood 6 feet 6 inches tall and weighed 195 pounds, was named to nine NBA All-Defensive First Teams compared to James’s (6 foot 8, 250 pounds) five.

It’s why Jordan, despite playing in a league dominated by some of the greatest centers to ever play the game, led the league in scoring 10 times compared to James’ one, despite averaging 2.5 less three point attempts per game.

It’s why, omitting his age 38 and 39 seasons with the Washington Wizards, Jordan scored 40 or more points 108 more times and 50 or more points 19 more times while winning three more championships than James, despite playing in three less seasons up to this point.

It’s why, at age 34, Jordan won his sixth NBA Championship in his sixth finals appearance while age-34 James missed the playoffs in his first season in the Western Conference. Sure, James missed 27 games last season, but the Lakers labored to a 28-27 record with him on the floor.

When facing increased scrutiny, James’ supporters must manufacture excuses to justify his shortcomings. On the other hand, Jordan placed himself in a position where such excuses aren’t necessary. Where James’ teams lost six NBA finals (two of which can’t be attributed to James under any logical argument), Jordan had a 1.000% winning percentage while never allowing his opposition to advance to an NBA Finals’ Game 7 under his watch.

LeBron James is a great basketball player. He is a player capable of taking over any game he plays in. He is in the conversation for the greatest of all time. But James’s moments of inspiration were Jordan’s standard.