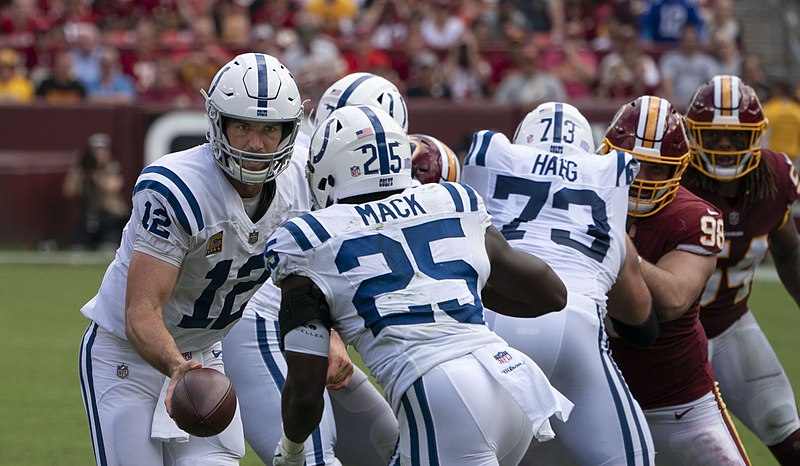 Andrew Luck hands the ball off to running back Marion Mack during the Colts’ Sept. 16, 2018, contest against Washington (Keith Allison)

Andrew Luck hands the ball off to running back Marion Mack during the Colts’ Sept. 16, 2018, contest against Washington

Former No. 1 overall draft pick and four-time Pro Bowl quarterback Andrew Luck staggered the football community after abruptly announcing his retirement last week at the age of 29. Following a daunting string of injuries including a torn labrum in his throwing shoulder, a lacerated kidney, torn cartilage in two ribs and a partially torn abdomen, Luck joined a recent migration of NFL players willing to prioritize mental and physical health over NFL fame.

The announcement set social media ablaze, laying the foundation for a heated debate surrounding the mental fortitude required to endure the rigors of a full NFL season. Doug Gottlieb of Fox Sports 1 drew the ire of Luck’s peers and fans alike when he tweeted, “Retiring because rehabbing is too hard is the most millennial thing ever,” prompting NFL legends such as Troy Aikman and Bo Jackson to race to Luck’s defense. However, once the initial shock of Luck’s retirement fades, football fans might notice a troubling pattern of early and sudden retirements from players during their prime years. So what comes next?

The Indianapolis Colts are left carrying the largest burden in the immediate aftermath of Luck’s retirement. Barring a 12th-hour free-agent signing, fourth-year quarterback Jacoby Brissett, a former New England Patriots third-round draft pick and the favorite to secure the role of backup behind Luck for preseason contests, will assume starting quarterback for Week 1 of the NFL season.

Despite his reputation as a career backup quarterback, Jacoby Brissett started 17 games across three seasons between the Colts and the New England Patriots.

Brissett’s best season came in 2017 when he led the Colts to a 4-11 record while throwing for 13 touchdowns, seven interceptions and 3,098 yards.  The Colts will rely on Brissett to utilize his experience as a starting quarterback to steer a team that suddenly finds itself in a state of disarray.

The heavier question, however, is what Luck’s retirement signals for a sport experiencing diminishing youth enrollment.

The current crop of NFL players launched a campaign to resoundingly dismissed the notion that career longevity takes precedence over long-term health. This isn’t a novel concept, of course.

Standout running backs such as Barry Sanders and Jim Brown hung up their cleats during the primes of their Hall of Fame careers. Nevertheless, while premature retirements used to happen once or twice every decade, the trend collected momentum over the past decade.

What began as a few scattered anomalies stemming from unique circumstances since evolved into a full-fledged pattern. Top-tier talent, some in the midst of Hall of Fame-caliber careers, are beginning to abandon the NFL in droves.

When Chris Borland, the promising linebacker for the San Francisco 49ers who finished third in the Defensive Rookie of the Year voting behind only Khalil Mack and Aaron Donald (arguably the two best defensive players in the NFL today), opted for retirement after a single NFL season in 2014, analysts reacted with mild bemusement.

While there wasn’t collective derision over the decision, many weren’t prepared to entertain the idea that Borland would inspire waves of players to abandon the NFL. However, Borland’s retirement came at the very onset of the Chronic Traumatic Encephalopathy (CTE) hysteria, findings which Borland himself cited when he told ESPN’s Outside The Lines that his retirement was spurred by a desire to “do what’s best for [his] health.”

Since Borland’s retirement, the NFL weathered a string of retirements from some of its most marketable talent– wide receiver Calvin Johnson opted for retirement at the age of 30; linebacker Patrick Willis at age 30; and tight end Rob Gronkowski at age 29. The list goes on and on.

While the NFL can withstand the retirement of some of its top talent, what should worry executives is how common such retirements are becoming. The studies surrounding the impact concussions carry on long-term mental health has presented a difficult choice not only for current players, but also among parents considering enrolling their children in youth football programs. It’s becoming more and more difficult to ignore the class-action lawsuits put forth by over 2,000 former football players who claim the NFL and its lack of transparency over long-term head trauma has irreparably compromised their futures.

With the benefit of retrospect, we often applaud players for prioritizing their mental and physical health over the allure of gridiron glory. In some cases, however, we are left to contemplate a series of what-ifs. In 2012, NFL Hall of Famer Junior Seau claimed his own life. By all accounts, Seau was an energetic leader, a gracious host and a fiercely loyal friend. His immediate family members were blindsided by his passing, claiming there was no indication of emotional distress.

“We’re all in shock,” Junior’s mother Luisa stated. “There is no way to make sense of this.”

Shawn Mitchell, then-pastor of the San Diego Chargers offered, “he was Superman, and Superman is no longer with us.”

However, the warning signs were there. In 2010, Seau survived a 100-foot plunge when his vehicle drove off the edge of a cliff.  The incident came in the immediate aftermath of alleged domestic violence. Subsequent investigations determined that drugs and alcohol were not contributing factors, begging the question: why didn’t officials recognize the deterioration of Seau’s mental health sooner?

It’s hard not to remember Seau’s infectious smile, a smile that retroactively underscores the damage of degenerative brain disease. While such a tragedy since contributed to the awareness and advancement of scientific emphasis surrounding brain degeneration, perhaps Seau’s suicide could have been avoided had the NFL offered even a modicum of transparency.

Today, lawmakers are pushing legislation that would prohibit children younger than 12 years of age from participating in football. Youth football has already experienced a steady decline in enrollment.

A few short years ago, it would have been difficult for fans to envision an America where American football is not the preeminent team sport. Today, that scenario is, at the very least, feasible.

As with every other premature retirement, the shock surrounding Luck’s announcement will subside with time, leaving in its wake an uncomfortable-yet-necessary dialogue.  High school and college athletes will be forced to weigh the long-term consequences of American football against the improbability of professionalism.

But the statistics are unfavorable. According to NCAA.org, only 1.6% of college football players reach the NFL. High school athletes are even less likely to reach the professional level, with only 0.09% making it beyond the college ranks.

Right now, the professionals are speaking and their message is clear: the dream is not worth the physical and psychological traumas. At what point is it the public’s responsibility to listen?