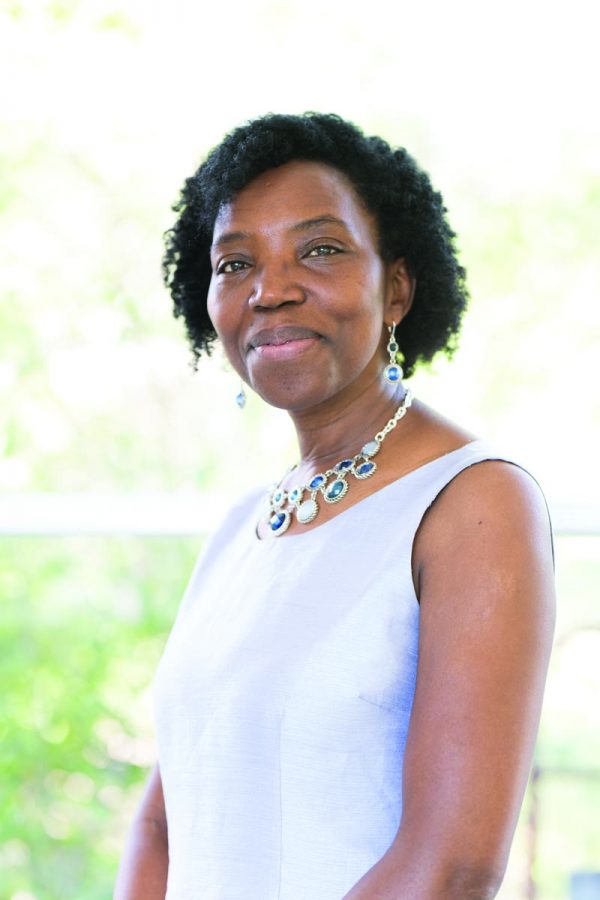 Jeanine Ntihirageza was born in Burundi in Central Africa and fell in love with the English language through music. She was a gifted math student but could not find a math program in English in Burundi so she changed her focus to study literature and linguistics. In college she became a Fulbright scholar and came to study at Southern Illinois University.

She got her doctorate degree in linguistics from the University of Chicago. “I opted for University of Chicago, although, I didn’t know what it meant (to attend that school). I just knew I was at SIU and it’s in the same state so I didn’t have to travel too far and they offered the most money,” she joked. While Ntihirageza was there, she realized that due to the changing political climate in her home country; she could not go back to Burundi.

“I’ve fallen in love with Northeastern,” she said. She came to teach with very high expectations of her students as a professor coming from both Burundi and University of Chicago. She was surprised when she received her first assignments and got to work straight away to better understand how she could best serve her students.

“When you have someone who comes in and is not well prepared, but in the end they do very well. You watch them grow and become teachers themselves or become professionals out there. It’s such a joy to watch,” Ntihirageza said. “It is so rewarding to work with students who say ‘we don’t take this for granted’. Most students we serve don’t take education for granted. They come and you train them and they appreciate it. That’s very fulfilling.”

As a member of the administration, her work is divided into teaching, service and research. She finds a lot of crossover in the service and research she does. She focuses on genocide in Africa and in the diaspora.The diaspora refers to African people settled outside of Africa. One of her many passion projects is the Genocide Research Symposium.

“It’s personal. My father was killed in genocide. I didn’t realize at that time it was my own healing journey. It turned out that way,” Ntihirageza said. “When I first started, I wanted to have a conversation about genocide in Africa and the diaspora. Because when they talk about genocide in the world, it’s the holocaust and Rwanda mostly and then others.”

Her service work involves refugees and helping them navigate systems such as healthcare, school, job and life skills. She said, “They’ve never lived in urban centers. They’ve been in remote refugee camps in remote poor countries. All of a sudden they are in the city of Chicago. And they are suddenly supposed to function. Many are survivors of genocide, so the two projects are linked.”

She works with Chicago Cancer Health Equity Collaborative (ChicagoCHEC) to further her work and help refugees be recognized as another minority group. “Generally they are looked at as being just African-Americans, but when you look at these African refugees they have a different kind of life history.  They didn’t eat the same food African-Americans would eat. They don’t speak the language African-Americans speak… They’ve lived in camps in isolation for ages. Yes, they are kind of the same in terms of socioeconomic class but in terms of health they are so different,” Ntihirageza said.

She recalls, “I honestly didn’t realize I was black until I was 30 years old. That’s when I was trying to buy an answering machine and they wouldn’t give it to me. Then I go with my white friend, Johnathan. Then people started saying ‘ Oh, may I help you? May I help you?’ I asked him, ‘Johnathan, why didn’t they say may I help you earlier?’..he said Jeanine you’re black. I said ‘oh my, what I’ve read in books, its real. I am now.. Embrace it.’”

She also works with refugee high school students through a program called Girls Engaged in a Mission to Succeed (GEMS). She assists them in boosting their English language skills, think about reading, STEM through gardening and health.  She said, “One of the things I love about NEIU is I can look around and see women succeeding. I can see black people doing well. So it’s a joy of joys..I’ve been able to wear different hats, which is fun. And honestly, at the end of the day to be allowed to think. The freedom to think outside the box, that’s gold.”

In 1972, 200,000 members of the Hutu tribe were killed in three months in Burundi. Mostly educated, professional males with money. Ntihirageza lost her father, cousins and two brothers. “In Burundi when the genocide happened we were taught to not cry. We were taught to not mourn..We don’t say anything, we don’t think about it. It just never happened..Olivia Perlow wanted to work with me on a project on the language of violence and we sat down towards the end and I started talking about the language that they called us.. I’m a different human being since then.. That was 2013. The woman in 2012 and the woman in 2013 are two different human beings. The healing is real. I do it also so other people can find space for healing,” Ntihirageza said.

She advises women at all levels to seek, “Mentoring, mentoring, mentoring, relationships, networking.. Find the best mentors you can.. You want tough mentors. People who love you to pieces who don’t expect anything who rejoice in your growth. Those are the kind of mentors you want. Who are passionate about your success. Who, even when you achieve even a little success he or she celebrates with you. Those are the people you want. Make sure you establish relationships. You can’t do it alone. Have networks. Belong to groups. Read. It’s so important. Reading is crucial.”