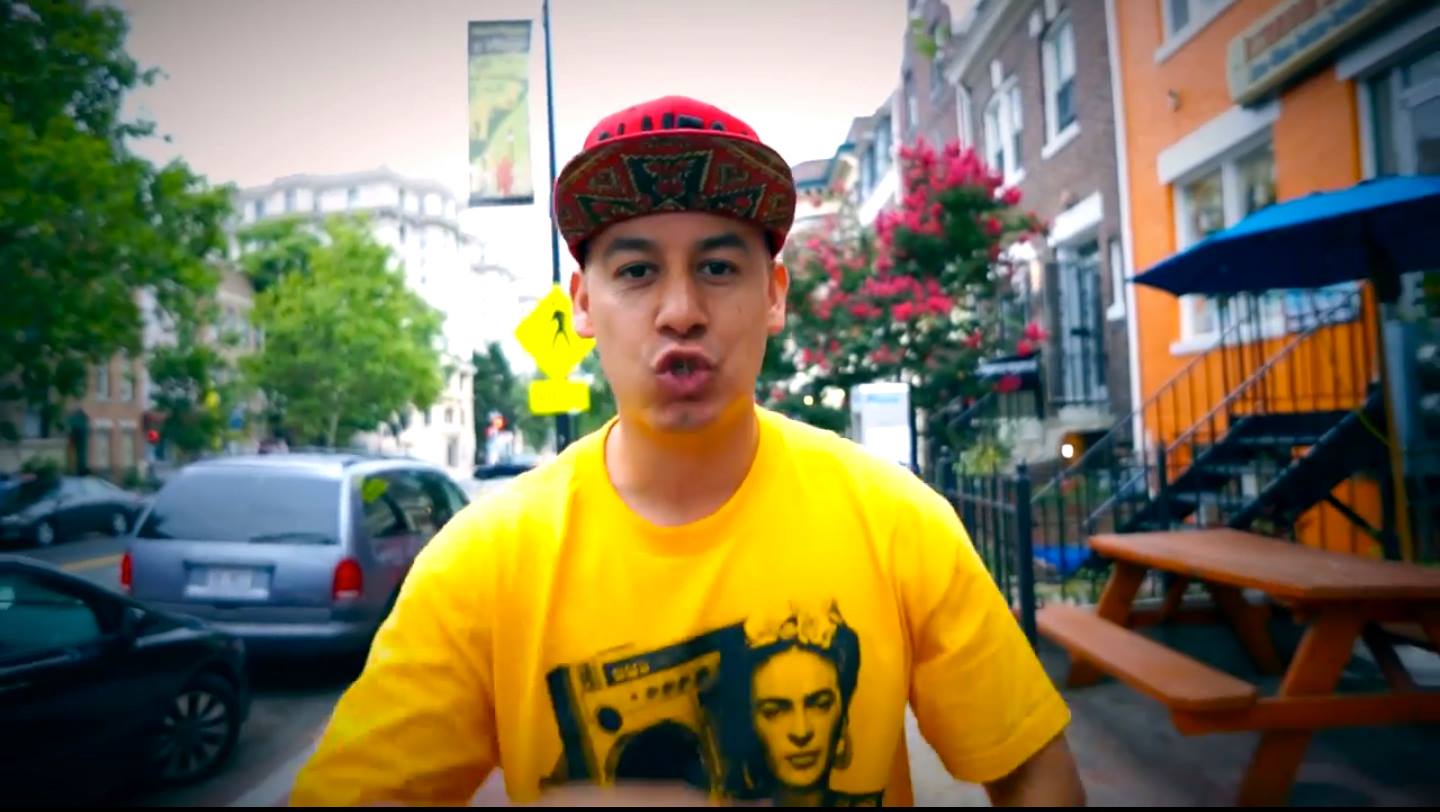 Olmeca rocking a Friday Kahlo tee in his music video for “Browning of America.” (Photo Courtesy of Olmeca)

Olmeca rocking a Friday Kahlo tee in his music video for “Browning of America.”

The lyrical pounds of Olmeca’s unapologetic hip-hop offered a kaleidoscopic perspective on what it means to be, as he puts it, “a product of the hood.”

NEIU’s Recital Hall on that Tuesday, Feb. 24, became a shuttle to a world of cultural empathy as MCs stepped up to the stage and steered with words of empowerment.

Preceding Olmeca’s performance was a series of student MCs from different universities, featuring: Kim Juarez, Demo, AlphaRcher, Davor Palos, Yo Bliz, Chris Ruben, Brandon Goin In, Tony Beat and Qoc’avib Revolorio. Each artist had a different story to tell but all had the same reason to be there, “to share, build community,” said Qoc’avib Revolorio, the host for the night.

Olmeca accomplished that goal when he invited fellow MC’s to come to the stage and share the microphone in a freestyle cultivation of talents.

“This is real hip-hop. We share the mic,” said Olmeca when he called the MC’s up as he incited the crowd chanting, “manos pa’ arriba” which in English is translated into ‘put your hands up’.

His use of both the Spanish and English language in his performance marked his realness and integrity. His identity includes roots in South Central L.A. and Ocotlán, Jalisco — and he’s not afraid to show it.

“I had a meeting with a big label not too long ago, and so—they continue to say the same thing like, look, I open myself up to the market, like an NBA draft or something. Boom. We do it. Alright, there’s interest, alright, cool let’s meet up,” said Olmeca on his run-ins with the music industry.

Olmeca shared with the crowd the two questions big labels usually ask of him, “‘Maybe we can say what you’re saying but in a different way — and you got to choose Spanish or English.'”

Olmeca has faced backlash for the cultural decisions in his music. In one instance, an interviewer asked him what he meant by the title of one of his albums, “Brown Is Beautiful.” he responded, “Once I get over the fact that you’re asking a very offensive question,” at this point the audience bursts into laughter, “the answer is really quite simple.”

Language is just the start of it; Olmeca’s roots also contribute to his high sense of communalism. His performance wasn’t really *his* performance. Olmeca took steps to make sure the audience was involved as much as possible.

During a portion of his show, he invited Laura Cabron up to the stage. She plays a jarocho, a smaller version of guitar with softer harping sounds that often leaves listeners romanced. Cabron is an old-time friend of Olmeca from LA, and are both “comrades” in the Coalition of Immokalee Workers, a human rights organization that fights for social responsibility, against human and gender-based violence.

What happened after she came to the stage was sheer cultura (culture): Studio-mastered beats were supplemented with Cabron’s strumming and melded with Olmeca’s flow in a duo of what can only be called, a beautiful hue of Brown.

But before they played anything at all, Olmeca called out to the audience and asked them to say one thing about the world today. The audience cheered, “Women rock.” “We are in resistance.” “Brown is beautiful.” “Que vivan los estudiantes. (Long live the students)” “Resilience.”

At the finale of their first song, which chorused “hasta que te encontré (until I found you)”, Olmeca paired members of the audience and had them turn around to share the line with each other while the jarocho kept the melody and the claps kept the beat.

Every biographical anecdote Olmeca shared on stage resonated with one of the tracks he played, Perhaps most in his song, “Pieces of Me,” which was alternatively mixed with Cabron’s jarocho.

Olmeca rejected football scholarships from different schools including Brown University, New York University and the University of San Diego. He said this was based on the unfulfilling experiences he had when he visited their campuses. It was more important to him to stay close to home and take care of his family.

‘”So I go to school instead of streets, reject my football scholarship and focus on the books to get my grades up and show the hood that anything is possible. Another grind I know I could. And finish to make my people proud like I said I would,” he recited in a verse from “Pieces of Me”.

He talked about the importance of staying within your neighborhood and giving back to your community after becoming successful.

Olmeca said, “If any of you are from there [the “hood”, referring to neighborhoods of marginalized minorities whom are stricken by poverty], and you’re at this university and you’re going to graduate. For these youngsters to see you, the way that they are, to see a mirror in you, that’s mad empowering, yo.”

“It’s like you get out of the hood and you change, it’s like, ‘yeah I need to get the f- out of here’ and these kids are like –” he then mimicked a motion of head as if looking for someone.

“We’re taking things away from them if we don’t do that.”