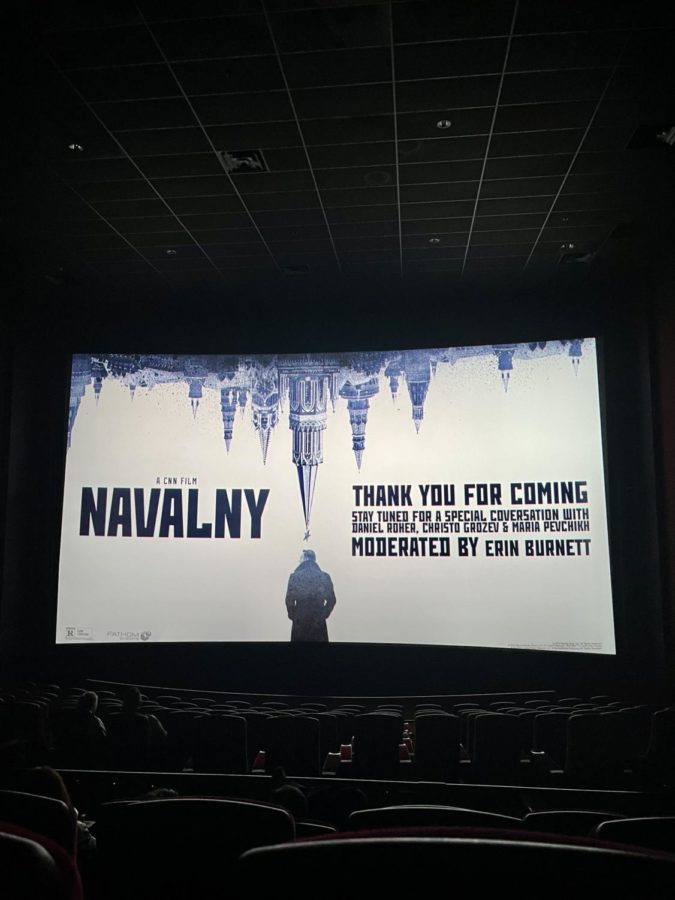 “Navalny” is a 2022 documentary about Alexei Navalny, a Russian opposition leader, Putin’s enemy, and threat number one. After his successful anti-corruption investigations of the most powerful, high-ranking Russian government and officials, Navalny received a lot of “attention” from the Kremlin. In 2020 a politician was poisoned by the Federal Security Service (FSB) spies, but he survives. He recovered in Germany, participated in the investigation of his own poisoning, and returned to Russia where he was put in jail for 11 years and 8 months. This series of events sounds like a plot for a thriller movie. Well . . . it did become a movie.

This documentary needs no special effects; real events happening in front of your eyes are enough to shock anyone. While Navalny was in the Berlin hospital, Christo Grozev—an investigative journalist at Bellingcat—found a group of eight men from the FSB who have been following Navalny for the last few years after he announced his decision to run for the presidency. Christo contacts Navalny’s team to share his suspicions. It is in this way that Navalny becomes a part of the investigation of his own poisoning. At the same time, the director Daniel Roher becomes a part of the team and starts filming everything that was going on. So the story is happening in front of our eyes in the real-time of the events. You can feel it in the film. You see real emotions and feel the tension until the very end. Daniel Roher managed to be a storyteller in the epicenter of the events at the same time.

Something happens that no one could ever expect during the filming. Navalny applies his creative abilities and sense of humor and decides to make a prank phone call to one of his own attempted-murderers Konstantin Kudryavtsev. Navalny pretends to be his boss and asks “for the details for the report.” As a result, Kudryavtsev tells the facts of the poisoning which no one knew about before. A couple of months later Navalny makes an extraordinary decision to go back to Russia. The plane literally turned around in the skies of Moscow and landed in a different airport. Officially it was explained by technical problems at the destination airport. Many people, including Navalny’s team and allies, don’t believe in this coincidence. They think it was done on purpose, to prevent Navalny from meeting/seeing his supporters, to deprive him of emotional support and attention, and to prevent people from protesting. Thousands of people were waiting for Navalny to welcome him back home. As a result, most of them had no time to get to another airport by the time the politician landed. He gets arrested at the passport control and receives three years in prison for a fabricated case. Russians all over the country demonstrated and around 18,000 people were arrested. Currently, Navalny is still in prison. His new sentence is nine years in a strict regime colony. A touching moment of saying goodbye to his wife at the airport becomes his last moment at large, but considering how strong he stands and fights for the truth against the authoritarian regime, is he not a free man after all?

This documentary could not be more relevant today considering Putin is still in power. Alexei Navalny became a hope for a better future in Russia and this movie allows us to see history. Roher displays not just the process and details of the investigation, but also a politician’s life from the inside throughout the whole movie. Navalny appears on the screen as a naturally charismatic, smart, direct, brave and lucky man, as well as a loving husband and father. It is also curious to see his wife, children and closest associates in the film.

Navalny’s family is a typical family living in very atypical circumstances. All family members realize the level of danger Navalny is subjected to. Since his daughter, Dasha,  was 13-years-old, she has been imagining what she would do if her father was ever killed. It sounds insane when you hear this, but you also understand the high level of support Navalny’s family provides him. Feeling threatened is a part of the Navalnys’ life; it’s their reality. It impresses how much this family personally sacrifices every day for what they believe in.

As a Russian citizen, I felt truly happy to have a chance to see this movie in a theater because it is forbidden in Russia. It is precious to have this opportunity here in the United States. It is absurd to see how much recognition Navalny’s figure receives by the international community and at the same time he does not have basic human rights in his own country. The film and my review end with his appeal to Russian citizens, but in fact it can be a message to everyone in the world standing on the side of truth and justice. His last words followed by applause are, “The only thing necessary for the triumph of evil, is for good people to do nothing. So don’t be inactive.”

If you want to see this history-making movie for yourself, it will be available on streaming platforms HBO Max and CNN Plus later this Spring.