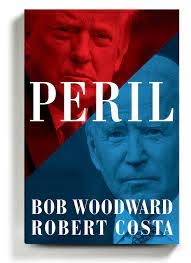 During one of the most contentious presidencies in the history of our democracy, “Peril”  allows you to be a proverbial fly on the wall. The reader is skillfully led through the timeline of what had been transpiring behind the doors of the White House from this unconventional president.

As key events unfold, we are given a behind-the-scenes look at the players and how some of the most precarious situations our country had been in played out. The position of the leader of the free world was now in place. The man who had never held political office was our leader. The authors muse about what could and had set this world leader off, what would capture his attention, and, finally, what misstep could thrust America into the center of a war. This president is described in the book as a narcissist, someone who was ill-prepared to handle a crisis, and how the onset of Covid-19 showed just how unprepared he was.

The White House seemed to have a revolving door in place, and anyone who dared to question the president would be shown to that door. America, at this time, did not resemble any other time in our country’s short history. Yes, riots were taking place, people were speaking up for themselves and the resolve of the president was called into question. It is hard to believe that the events replayed in this book seem like a dream—or nightmare—that had taken place, no matter the fact that this all happened during one man’s presidency. This president felt that domination, fear, and control were the ways to handle many situations that were taking place. This president spewed out such reprehensible things, yet he was allowed to keep doing just that. This president stated he loved people who were poorly educated because he knew how easily they can be swayed and controlled. Good press and acting as if he was strong were parts of the persona that his president wished to embody.

It may be hard to revisit these situations, some incidents can trigger you and cause anxiety, but I feel that it is of great importance to recall these events. The right to vote is being questioned. Trying to enter the voting booth and that the booth’s accessibility is in question. America needs to bring back a sense of togetherness, kindness, and, of course, awareness that actions do have consequences. As a president, the people of this great country’s welfare need to know that for four years we had to endure a man who caused a true insurrection. We must educate ourselves, be aware that those in public offices were elected by the people, for the people, and serve the people. Education truly is the key.

Bob Woodward is a one-time investigative journalist of the Washington Post who is now an associate editor and is not unfamiliar with a presidency marred by controversy.  During the Nixon administration, Woodward and Carl Berstein covered the 1972 break-in of the Watergate Hotel—the headquarters of the Democratic National Convention. The entire incident was covered in their book “All The President’s Men,” which was later turned into a movie. The biggest reaction to their coverage of this incident was the resignation of President Nixon before he could face impeachment. Nowadays, Woodward is given unfettered access to the Oval Office. Woodward is a man that holds no punches and conveys the story in a way that can be understood by all.

Again, I highly recommend reading this book. It will allow you unique access to the daily events of a president, our country, and those who seek to control it all in the name of democracy. Take the time to read this book and other recent books by Woodward.  Woodward is the sole author of “Fear” and “Rage” which offer the unusual, uncensored, and unvarnished truth of a presidency.