The 3rd Time’s The Charm! 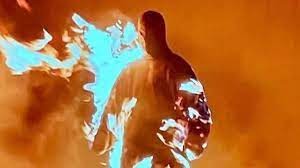 Kanye West walking out of the replica house, on fire.

After producer and artist Kanye West performed two listening parties for his upcoming album, DONDA, he plans to perform a third listening party in Soldier Field at Chicago, where he has spent most of his early life there. And I went over there to experience it for myself.

I met up with some people from the r/WestSubEver subreddit before the performance, which is a community in a social media app, Reddit, where dedicated Kanye West fans discuss anything and everything Kanye-related. Overall, the meetup was enjoyable and wholesome. Everybody there was taking group pictures in front of a Giordano’s while socializing and having a bite of some classic Chicago deep-dish.

The group and I headed toward Soldier Field after the meetup and after having our bags and tickets checked,we all saw the set in the middle of the stadium. It was a replica of Kanye’s childhood home in south Chicago. An illuminated cross sat on top while candles surrounded and irradiated the base of the house. From there on, nothing really happened until around 11:00pm — almost two hours after the initial showtime. We saw the concert start off with Kanye and his family stepping out of the front door and hangout on the steps of the porch of the house. The speakers play a prelude of some woman saying “Donda” over and over again. Pictures of Kanye and his late mother, Donda West, are projected in sync with the word onto stadium screens. The prelude ends and then the show really starts.

“Jail” featuring DaBaby was the first song played at the listening party.” More spectacles appeared during the song, such as a compilation of clips with Kanye , from the Red Cross infomercial incident, to him performing for the inmates in the Cook County Jail and a black vehicle driving around the set. As the listening party progressed, more black vehicles appeared, as well as a multitude of people dressed in black and wearing masks and bulletproof vests with “DONDA” labeled on it. Additionally, “breaking news” screens with various Bible verses as the headline and pyrotechnic work rounded out the visual aspect of the listening party.

When compared to the last listening party in Atlanta, there were some surprising changes on the musical side that Kanye made such as some cut verses of artists such as Jay Z and Playboi Carti. He also extended parts of certain songs and even included a feature from The Globglogabgalab, a fictional character from Strawinsky and the Mysterious House.

As the listening party came to a close, he played “Come To Life.” Within a couple minutes into the song, the screens show Kanye sitting down as flames gradually engulf a room similar to the one from the 24-hour livestream that was prior to the second listening party in Atlanta. Kanye then stands up and leaves the room, which triggered red and orange flares from inside the house. In the final seconds of the song he steps out of the house, catches on fire and collapses to the ground. This segues to the final song, “Leave No Child Behind,” where Kim Kardashian appears in a bridal gown, making her way toward Kanye. After the song ends, stadium lights create an effect where the house looks like it is burning down.

This third –and final — listening party did, without a doubt, display the most astounding theatrical performance of the three. In a musical sense, some fans were disappointed to hear their favorite features in the upcoming album cut from the Chicago listening party event, but on the other hand, they were excited to hear new tracks, and some extended parts of certain songs added to their surprise.

As of August 29, 2021, the album was released at 7:00 am CST, but with a significant issue; the release wasn’t approved by Kanye himself. Later on, Kanye made an Instagram post stating that Universal Music Group released the album without getting a final confirmation from him. The reason why is most likely because of Kanye working with his manager, Abou “Bu” Thiam, to convince DaBaby’s manager, Arnold Taylor, to have DaBaby’s verse in the “Jail” song. Unfortunately, his manager isn’t willing to have Kanye or his manager release said album without removing DaBaby from the song. A few hours later, the situation was resolved and the album is now available on all streaming platforms, along with “Jail, Part 2,” the song including DaBaby’s verse.