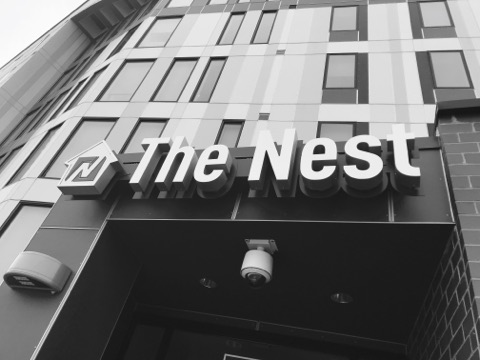 Examining the pros and cons of living in The Nest

From an aesthetic standpoint, The Nest at Northeastern Illinois University offers an ideal living arrangement for any college-aged student. Yet too many of The Nest’s occupants–and perhaps the university as a whole–the complex has been less than a roaring success from the moment it debuted in 2016 to a far lesser occupancy rate than the 80% promised by university representatives. And while the physical amenities of the structure do earn applause from many residents, the same students also decry many of the Nest’s policies.

Four years later and opinion remains unsettled about a project once meant to represent a giant step forward for NEIU. To further examine the Nest’s strengths and shortcomings, the NEIU Independent toured the complex and interviewed five current tenants.

At first glance, the six-story, 400-bed, 150,000-square-foot complex impresses with its contemporary take on modern architecture, exceeding the standards of any ordinary college dormitory.

Considering The Nest’s eye-catching design and “state-of-the-art” living standards championed by Nest representatives, commuting students would be forgiven for expecting The Nest to be overcrowded or, at the very least, nearing capacity. However, during a 2018 interview with Vice President for Student Affairs Dr. Daniel Lopez Jr. and Director of Strategic Communications Mike Hines in 2018, it was revealed that The Nest’s occupancy sat at 53% in 2017, far below its 80% contractual requirement.

For comparison’s sake the University of Illinois at Chicago—a public school also funded by the state of Illinois—offers a shared room for $9,836 per academic year, according to the school’s website. At DePaul, a private university, costs are $9,930 per year (again per the university’s website). Most, if not all, other Chicago schools are closer to these prices than The Nest’s.

Occupants at The Nest were quick to celebrate the dorm’s on-campus location. For tenants of The Nest, home is walking distance from NEIU’s main campus, providing students more free time to study, prepare and sleep. Some students also reported that, given the appeal of its welcoming community, The Nest provides a ready-made platform to socialize and make new friends.

Junior and first-year tenant Gerardo Fernández cites the camaraderie between The Nest’s occupants as one of his favorite parts about living at The Nest, saying, “It gives students a great chance to socialize more around the college and meet new people.” Not only are students assigned a roommate, but amenities like the game room and lounging area provide a space for students to meet new friends.

Other than The Nest’s close proximity to NEIU’s main campus, perhaps the most apparent benefit of on-campus living is the freedom and privacy afforded to each tenant. Regardless of dorming arrangement, students are not expected to share a room with more than one other occupant.

For junior and second-year tenant Robert Dawkins, parental autonomy is the most valuable aspect of his dorming experience. “Not having parents hang over me all the time feels great,” said Dawkins. “Always being able to do what I want is definitely a positive.”

While the benefits of The Nest are readily apparent, occupants exhibited the same vigor when revealing the dorm’s shortcomings. Despite possessing good amenities, low cost, a close location, a thriving social scene and virtual autonomy for residents, The Nest remains beneath occupancy standards, and student-tenants of the dorm routinely criticize NEIU’s student housing.

The tour of the complex was painfully brief, offering a quick scan of four-bed, two-bath model before transitioning to what amounted to a courtesy viewing of the lounge space, on-site laundry and fitness center. Perhaps even more concerning was the combative attitude adopted by staff, which the attending representative attributed to a prohibition against continued communication with the NEIU Independent. When a photographer representing the NEIU Independent revisited the complex the following Tuesday, he was informed that staff at The Nest were instructed to withhold hand sanitizer from the public, despite NEIU closing its doors for the remainder of the semester amid growing concern surrounding coronavirus COVID-19.

Occupants at The Nest also condemned the divide between staff and tenants, citing lack of transparency and a disconnect over guest privileges at their foremost concerns.

When asked to list the cons of living at The Nest, a junior and third-year tenant who wishes to remain anonymous denounced The Nest’s fees as unfair. “The overpowerage fee and the price to wash and dry are really annoying, man. If these fees can’t go away, they should just be included in the tuition so we know about them in advance, or at least given a heads up.”

Restrictions on guest privileges resurfaced as a contention throughout each interview, with most interviewees stating that The Nest should allow more guest sign-ins. The Nest’s guest policy reads, “Residents may have guests with appropriate permissions, up to two consecutive nights, up to four times per year, per guest.” The right to host guests absent of supervision is a crucial building block that contributes to the idea of dorm freedom.

However, this is far from the case at The Nest, as strict rules and guidelines handicap a student’s ability to host friends or family, even when their guest list is limited to one person. Many of those interviewed consider social gatherings to be essential to the college experience, and if The Nest retains its rigid social standards, not only does it portray itself as a closed-off community, but the lasting impression it leaves tenants with is incompatible with the message the university hopes to send prospective students.

Given The Nest’s relatively low occupancy and tenant exasperation, if The Nest hopes to keep itself from going completely under, changes are needed on multiple levels. With respect to the indispensable importance of community safety, tenant happiness deserves greater prioritization. .Although The Nest partially redeems itself with its amenities and modern touch, tenants made clear that the cons of living at The Nest are more noticeable than the pros. The eye-opening tenant narratives were not only informative, but their proposed improvements could benefit The Nest should NEIU representatives elect to entertain the idea of relaxing its guest parameters and offering greater transparency surrounding hidden fees. In the meantime, The Nest must examine its most glaring flaws in order to capitalize on its undeniable potential.