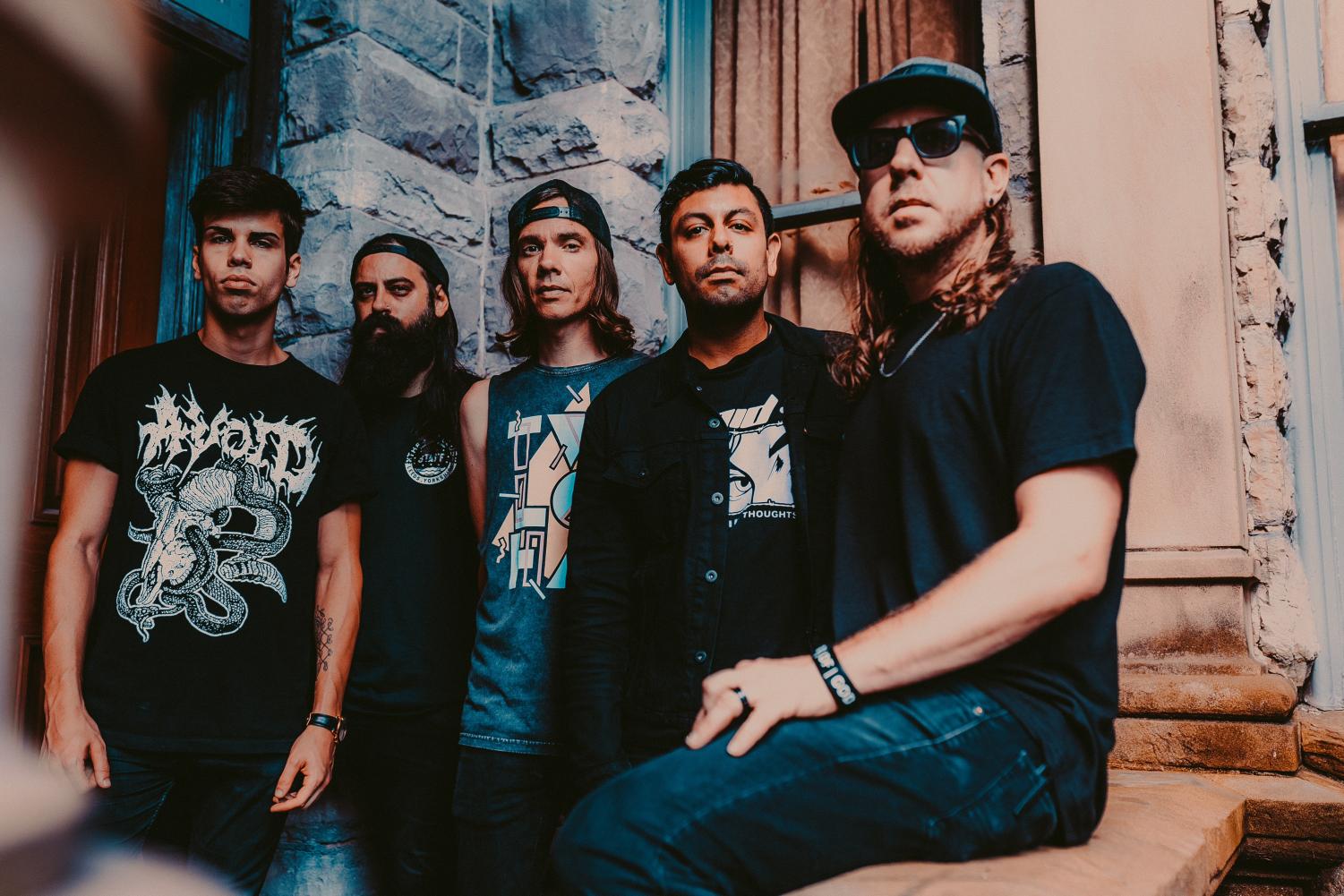 On Jan. 31, Florida punk rockers The Red Jumpsuit Apparatus (TRJA) released “A Long Time Ago In a Galaxy called LA,” the first single off their upcoming The Emergency EP. The band’s first original release since 2018, the number utilizes the principles of 90s punk rock to explore the uncertainty of love in its embryonic stages.

Over the past 17 years, the Red Jumpsuit Apparatus–vocalist Ronnie Winter, lead guitarist Josh Burke, bassist Joey Westwood, rhythm guitarist Randy Winter and drummer John Espy–earned a reputation for negotiating difficult themes at a time when rock and its subgenres shied away from such provocative topics. Older fans may credit “Face Down” for brazenly confronting the traumas of domestic violence. Newer listeners might appreciate “Shooting Star” for its harrowing illustration of the impacts of addiction.

“[‘A Long Time Ago In A Galaxy Called LA’] is literally just me talking about what I went through the night I met my wife because she blew my mind,” says Winter. “I was thinking I wasn’t good enough, but it worked out for me. Here we are four years later, married with a kid. Life is good.”

Narrating his journey from tentative bachelor to confident newlywed, Winter states that the chemistry between he and his future wife developed organically. Though neither was actively looking for romance, a shared physical attraction combined with professional and quirky commonalities–Winter specifically cites the holographic universe–to form a lifelong bond.

“Neither one of us were looking for a relationship,” explained Winter. “We met through a friend of mine named [producer] Lee Miles. She was actually an engineer working on that record. After work, a lot of people got together to hang out. It was perfect–no ego, no one really dressed up nice, no one trying to impress. We just hung out casually with mutual friends and kind of just hit it off.”

From an instrumental perspective, Winter says The Emergency EP will deviate away from TRJA’s traditional sound, if only slightly.

While The Red Jumpsuit Apparatus are renowned for their ability to stagger powerful anthems of youth against reflective ballads, Winter says The Emergency EP borrows from the 90s punk he grew up listening to. “We’ve been doing pop punk, post-hardcore, screamo and that type of stuff for a long time,” said Winter. “So it’s just been a while since we did a straight rippin’ punker.”

Winter continued: “I listened to a lot of 90s punk growing up. A lot of strung out Pennywise. These days you don’t hear it very often, so it almost sounds like something new. But really all we did was throw our hat back to bands like No Use for a Name. It sounds really fresh and crisp with new trebles and guitar tones but really it’s just kind of classic punk rock. It’s a classic element that sounds really fresh.”

From a thematic standpoint, Winter hints that The Emergency EP will maintain TRJA’s reputation as undaunted lyricists. According to Winter, even the lively “A Long Time Ago In A Galaxy Called LA” tackles this generation’s struggle to reconcile the competing emotions that accompany forgoing our internet personas and engaging in interpersonal communication.

However, Winter suggests that the remainder of the EP will interrogate more polarizing topics, issues that Winter says might be interpreted as contentious.

“There’s a lot of heavy stuff on there,” said Winter. “I’d say lyrically, it’s one of my most controversial lyrics of any release.”

“You may not think that from the first single. Some of the other songs get a little more deep and a little bit more direct when it comes to all kinds of topics that are pertinent today and are being discussed now. You won’t have to question what side I’m on. It will be very blatant and obvious when you listen to it. You’ll know.”

Winter’s willingness to navigate arduous topics is reflective of TRJA’s maturation as artists. With the tenured band members now balancing music and fatherhood, Winter says that the TRJA’s thematic direction mirrors the exhilarating highs and disheartening lows experienced by the band.

But while Winter’s personal narrative drives the acceleration of “A Long Time Ago In A Galaxy Called LA,” Burke’s fingerprints are readily apparent throughout the song.

As “A Long Time Ago In A Galaxy Called LA” slows to a steadier pace at the final verse, listeners can latch onto Burke’s intoxicating mini-riffs that operate as a corridor between each measure and lyric. Despite being celebrated as a staple of the 2000s post-hardcore, Winter credits Burke with adding a novel element to TRJA brand.

“Just listen to all the songs that we’ve recorded with Josh–just awesome guitar,” glowed Winter. “We never had lead guitar like that until Josh joined, so it’s very great to have him. A lot of great guitar work from Josh on this EP. It’s a pleasure to watch him shred.”

According to Winter, his first encounter with Burke came by chance. Before a performance in Syracuse, N.Y., Winter was tasked with replacing his guitarist’s broken guitar strings when he encountered a teenage prodigy who was “just shredding.”

“I’ve seen a lot of people play, I’ve been in a band for a long time,” said Winter. “I’ve met a lot of really fantastic players, including some legends. He was the best, hands down the best I’ve ever heard without even trying. He was young at the time too–like 15 or 16 [year olds].”

Impressed by Burke’s talent, Winter stayed in contact with Burke in hopes of helping him embark upon a career in music. However, once guitarists Matt Carter and Duke Kitchens departed TRJA, Winter asked Burke to fill the vacancy.

“I asked him, ‘I know you know Van Halen and I know you know legit Metallica solos. Do you know any Red Jumpsuit?’” recalled Winter. “He’s like, ‘dude, I know every song.’ We had one day to rehearse and he killed it.”

Seemingly capable of improvising a searing guitar solo, Burke’s contributions add a new dynamic to a band that has already collected eight Billboard chart-topping hits. And while songs like “Your Guardian Angel” and “False Pretense” will forever be engraved in the heart of the 2000s post-hardcore scene, Burke’s talent is representative of TRJA’s current identity.

For fans just discovering The Red Jumpsuit Apparatus’s daring brand of post-hardcore rock, Winters invites fans to first sample their latest releases before diving into past efforts. According to Winter, “A Long Time Ago In A Galaxy Called LA” mirrors both who TRJA are and what they represent in 2020.

For those hoping to see TRJA live in concert, the band announced their West Coast headlining tour in promotion of The Emergency EP before heading to Australia in support of Boys Like Girls’ 15-year anniversary tour.

Winter tells fans to expect a good time. While TRJA won’t rely on pomp, stage props or outlandish attire to impress their audience, Winter says they will arrest their audience with old-fashioned hard rock.

“I would say we’re a little heavier than people expect live, but that’s usually a good thing,” said Winter. “We always play the hits. We’re not one of those bands who doesn’t play certain songs anymore or certain records; we’re very much the opposite. We still love our first album. We think it’s great. Chances are that if it’s been out, it’s been pushed and there’s been a video for it, we’re gonna play it.”

Winter also states that the band is malleable, willing to deviate away from predetermined setlists to satiate their audience’s appetite. According to Winter, TRJA will entertain requests If a crowd is adamant enough. Should a crowd demand a song, Winter says he and his bandmates will “let it ride” for both older fans and newer fans alike.

“If you have seen us live, you know what’s up. We’re good. We’re just a regular band who rocks hard live. So if you like good live music from musicians who are actually playing their instruments–mostly everything you see here is real to a really crazy degree–that’s what we do. It’s always a good time.”