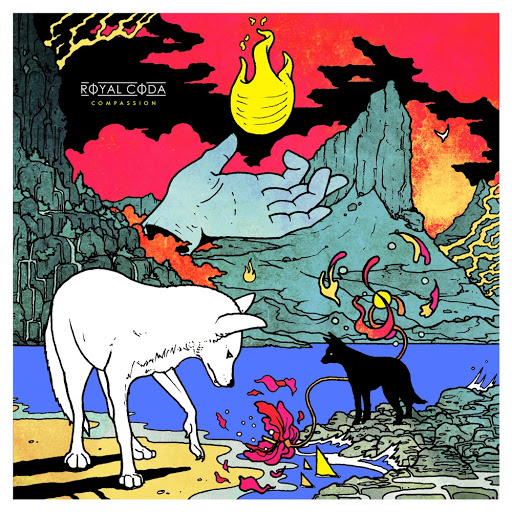 “Because we have compassion, happiness is no longer hard to find.”

“Compassion” brings Royal Coda’s hard-hitting, post-hardcore style and couples it with a series of smooth, dreamy moments capable of captivating listeners. The band’s second studio album evokes the type of catharsis that is sure to tug at the soul.

Sometimes frenzied, other times delicate, oftentimes both, Royal Coda takes listeners on a journey through a glorious set of whimsical and emotional songs.

“Compassion” opens with  “Ruby Leaf,” which does a fantastic job of setting the stage for the remainder of the album. “Ruby Leaf” showcases the band’s talent and sound, foreshadowing the pacing and energy that defines the rest of the album.

The album finds its groove with “Numbing Agent,” a track that comes in strong with a hard-hitting melody that places angst-driven vocals over a jazzy riff and blissful bridge. “Numbing Agent” oozes with Travis’s trademark emotion and allows it to breath from both a lyrical and vocal standpoint.

“Becoming a Memory” begins with Swan’s funky, intricate sound flowing seamlessly into Travis’s vocals. This track has a nostalgic feel to it, reminiscent of Dance Gavin Dance’s “Happiness” era.

Donovan Melero (Hail the Sun, Nova Charisma) is featured on “Don’t Stay Long,” adding a brilliant finishing layer of unorthodox grandeur to the album. The combination of Travis and Melero makes for an impactful listening experience that captures each of their talents and vocal styles.

For those new to the post-hardcore rock scene, Travis previously fronted Dance Gavin Dance alongside Swan.  Swan joined Travis in Royal Coda, bringing his legendary guitar and songwriting abilities to the table. Swan and Travis previously collaborated on both Dance Gavin Dance’s 2008 self-titled album and 2009’s “Happiness.” The reunion of Swan and Travis has left fans salivating for the trademark sound that helped define one of rock’s most unusually fluid and underrated eras.

Royal Coda will tour this upcoming spring with Dance Gavin Dance, Animals as Leaders and Veil of Maya.

You can check out Royal Coda’s album “Compassion” on music streaming platforms or head to www.royalcoda.com to snag a vinyl or CD.