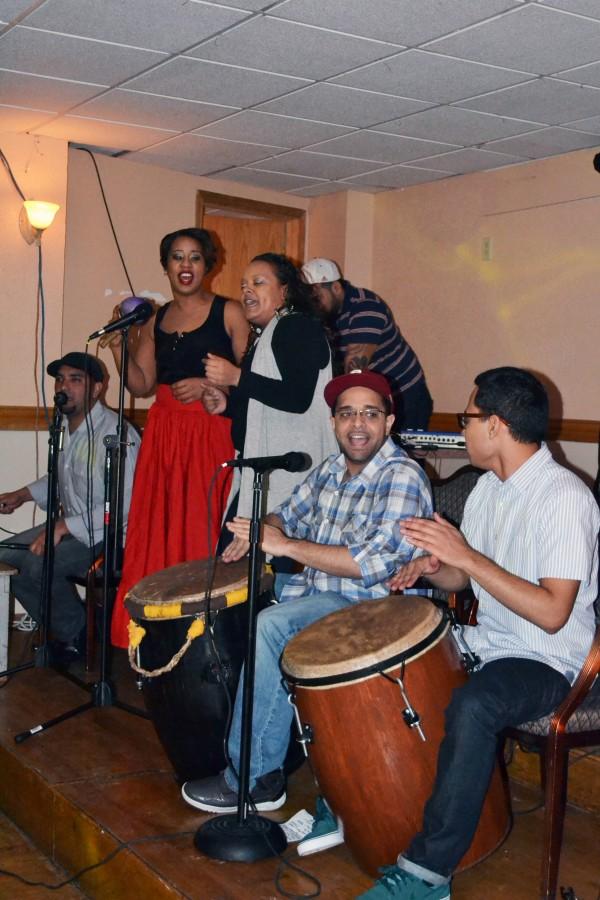 Righteous from Righteous Ones performed several songs from his Purgatorio: Wrathful Ashes album, including “Lose it,” “Ain’t Quite Me (Anti-Swag),” “Lip,” and “Just a Dreamer (Remix).” Righteous finished up his set, congratulated the Batey and jokingly said, “I don’t even know of relationships that have lasted 11 years.”

Michael Reyes and Janeida Rodriguez, both NEIU alumni, performed spoken word pieces. Reyes, a co-founder of the Batey performed several poems, including a poem from his album We Are. He also asked for 15 words from the audience, all of which were random, and he freestyled a spoken word poem. Using words like “bacalao (codfish), batman, corporate America, Humboldt Park and chupacabra.”

Rodriguez performed pieces about her Latina identity, as well as promoted her “Fat2Flaca” facebook page, where she documents her weight loss and serves as a support structure for her followers. She concluded her poems by congratulating the Batey and thanking the community for their support. “This was the first space I felt comfortable with myself and it was a space that we developed together as artists,” Rodriguez said.

Reyes explained that the Batey was the creation of something the community needed- an art space and outlet for the youth in the community to express themselves. With the help of students from NEIU, the University of Illinois at Chicago and other schools working with the Puerto Rican Cultural Center, the Batey was established in 2002. Originally located on 2647 W. Division, in 2005, the Batey made a move to a bigger space at 2620 W. Division.

“The name batey (pronounced bah-tay) is a Taino word, which means a sacred place for special events, Reyes said. “But now Puerto Ricans use it to talk about the front space of the yard, or the family space.”

Reyes said that he is still a supporter of the Batey and finds it interesting to see the different projects the Batey puts together. Throughout the years the Batey has organized and hosted many events: beat battles, spoken word nights, hip hop/b-boy nights, and for a while they podcasted their own radio show. Outside of the Batey, the collective youth produced theatrical works, participated in the “Peoples’ Parade” on Division and worked with the National Boricua Human Rights Network and [email protected] Coalition to participate in “31 Days for 31 Years,” a campaign to show solidarity with Puerto Rican political prisoner Oscar López Rivera.

Organized by heads of NEIU student organizations, Batey’s 11th anniversary serves as a milestone for the Latino community at NEIU. President of Union for Puerto Rican Students (U.P.R.S) of NEIU and Batey member, Juan ‘Nito’ Morales described the two organizations as sharing a history of the community that intersects them. Editor-in-Chief of NEIU’s Que Ondee Sola (QOS) magazine and Batey member, Alyssa Villegas said “the Batey is a space with leaders on campus, and if spaces like the Batey didn’t exist to support the youth, then they wouldn’t have a place to express themselves.”

Director of the Batey and member of both U.P.R.S and QOS, Jessie Fuentes stressed the importance of having organizations like the Batey connected to universities. “We can connect the university with the community, we want the youth to see post-secondary education as an option,” Fuentes said.

Although the event was to celebrate the anniversary of the Batey, Fuentes also added that the event was a fundraiser to raise money for a number of Batey youths to go to Puerto Rico and learn and experience their culture. Villegas said that four to six youth members will fly to Puerto Rico for the 33rd Festival Jíbaro Comerieño, a celebration of traditional Puerto Rican music. They will also visit landmarks such as El Yunque Rainforest, Mueso de Arte de Puerto Rico, Playa de Ponce and Plaza Las Delicias, to name a few.

Aside from this and other projects, Fuentes hopes that in five years the Batey will have a full running music and theatre production studio, as well as be financially stable through state and federal funds. “I would like the Batey to be a model for other youth organizations to replicate, so we can have Bateys all over the city and world,” Fuentes said. If future Batey events are as successful as this one and continue to build a strong connection to the surrounding universities and communities, the youth of Humboldt Park will always have a space of their own to hone their creativity and innovation.

For more information on the Batey Urbano and their events, please visit http://bateyurbano.org/