Concerns and fears of teachers: ‘What role does fear play in our classrooms?’ 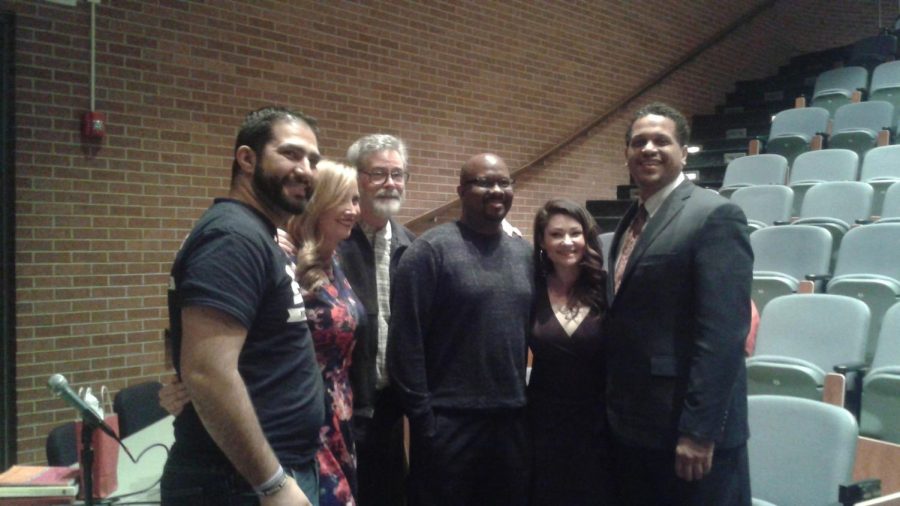 Students, faculty, and staff attended the “Whole Educator, Whole Child: The Impact of Educator Wellness on Successful Learning Environments” discussion on Feb. 20, hosted by Vanessa Ahmed, founder of Yawpster. The event relates to the current mental health crisis, the lack of support from the government to educators and schools, and the locked in fear of all teachers.

“This whole journey started for me when, a couple years ago, one of my favorite students came to me and said, ‘you are one of the most brilliant teachers. You’re so wonderful, but you are angry every single day.’ It was at that moment that I knew I had to quit,” Ahmed said, leading her to start the Yawpster movement.

The Yawpster movement is an “integrate progressive educational practices with mental health and wellness treatment models to produce a new way to engage in the teaching and learning process that emphasizes the value of fun, creativity, and human connection.”

Ahmed officially began the panel when she asked the guest speakers “what role does fear play in our classrooms?”

Grigsby said, “I’m constantly thinking about how can I not fail these kids I am a role model to and a teacher, while I worry about what scores they get on these standardized tests because that impacts my livelihood.”

Grigsby said that part of that fear comes from not being seen as a professional, being undermined and accomplishing tasks in the classroom that are oftentimes impossible.

“I’m terrified,” Duggan said. “There’s a fear of being in an institution that can’t sustain itself because of lack of funding. It makes you worry. Students also experience fear from a number of different sources. It’s important for educators to understand that they watch us and they can see when we are operating from a place of fear.”

Wozniak said, “I am fearful that I’m going to be judged and say the wrong thing. But, I’m guided less by fear and more by anger, anger with the system of public schools and anger that our elected officials are putting special interests over children’s needs and safety.

“Anger that I have to waste time on standardized tests and that it’s how I’m evaluated as a teacher. In my first year of teaching—and my dad was a teacher for 38 years— I called him and I said, ‘where’s the student advocacy?’ and he said, ‘Erika, that’s the union,’” Wozniak said.

“This is something that not all educators have, but the knowledge that I have a union who’s going to stand behind me, who’s going to work to protect me, so when I use my voice and I use it for the right reasons, I’m going to have backup. Something I hope every teacher in this country has,” Wozniak concluded.

“Principals don’t have a union,” said LaRaviere. “So I had a different source. To put it plainly, we teach in a system that is governed by people who are singularly corrupt. And as a result of being corrupt, they end up being profoundly wasteful in passing policies that seem wholly incompetent.

LaRaviere spoke about ex-chief Barbara Byrd-Bennett who was involved in a bribery scheme, Mayor Rahm Emanuel’s handpicked choice to lead the CPS system. Byrd-Bennett was found funneling about $20 million for a program that would supposedly train principals. “We all went to the training,” LaRaviere said.

“We knew it was horrible and we would sit during breaks and talk about how horrible it is, and what a waste of money it was. And at the same time, they had spent that $20 million on that training, they had taken tens of millions from our schools. And so, we were going through the horrible training that was the reason why we had to lay off 10-20 people across the district and across our schools,” LaRaviere said. “That’s how corruption leads to incompetence.”

LaRaviere was a principal for two years before he spoke out against the corruption. He said he was asked multiple times whether he was afraid of losing his job, to which he thought about why he became a principal and an instructor.

Ahmed continued with the next question, “as educators how do we create the space for ourselves in our classrooms? How are we going to heal ourselves as educators?”

“When you get separated from your purpose as a teacher and why you’re there and what you want to do, that’s a really unhealthy space to be in,” Duggan said. He said it’s easy to get discouraged and burnt out from teaching.

Duggan spoke how he first started teaching at his first school in northern California, at only 22-years-old. Duggan said people encouraged him to take on more responsibilities, and he did, even starting a drama club.

“I didn’t know a soul there. I was eight years younger than the youngest teacher in my department and I had to sacrifice a relationship, and leave my family. I went in to change, to really have an impact. I was doing a pretty good job, but I still felt like I wasn’t doing anything. So, I took on more responsibilities.

“I had nothing else, other than my career. It wasn’t sustainable by the third year, I was starting to have high blood pressure and panic attacks, and there wasn’t a balance,” Duggan said.

“And then it was like a tsunami. One of my students committed suicide, and there was a cluster by the end of the year of five kids who committed suicide, and four more who died in car accidents. It became a horrible, toxic place to be emotional. My intentions were good, it just felt like things were closing down.

“I had to get out of there, and it took me about a year or two to come back to teaching. You have to take care of yourself. So as an educator here, one of the things I tell my students is that you have to be a great teacher, but you don’t have to be every great teacher. You do the great things you do. Teach who you are, and the great things you believe in,” Duggan concluded.