Turning up with Chicago’s Vic Mensa 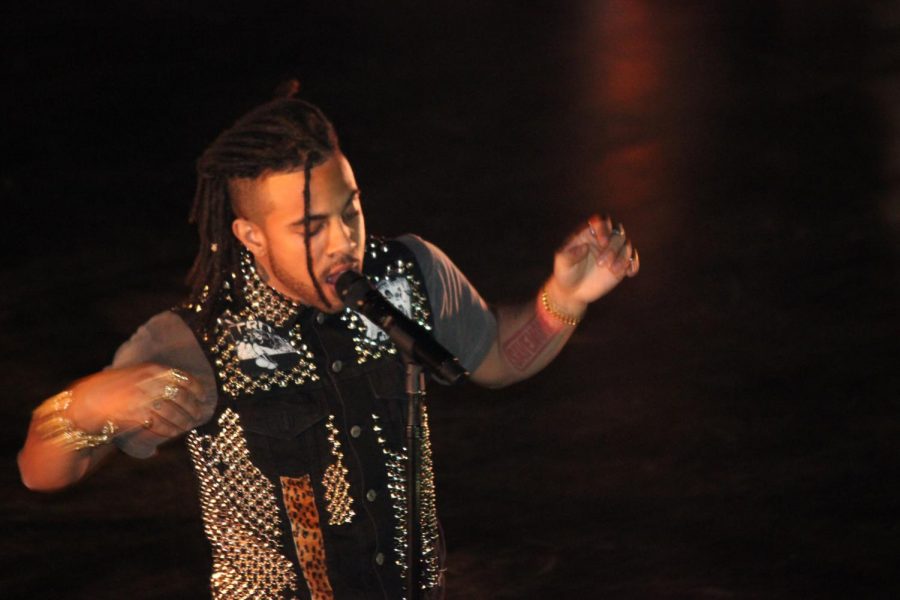 After several mesmerizing performances from nine groups who rapped danced or played on awesome LED drums, Vic Mensa held an inspirational improvisational Q and A with the audience during “The Turn Up” on Feb. 1.

Originally, graduate assistant for Student Leadership Development Albert Chanthaboury said he had a set of predetermined questions for Mensa.

“When he got in, he got to look at the list and he told us straight-up like, ‘I don’t like these questions,’” Chanthaboury said, laughing at the memory. “We were like, ‘Whoa! What do we do now?’”

Chanthaboury said it was Mensa’s idea to open questions up to the crowd instead.

NEIU student Erika Ramirez was blown away. “I didn’t know they were going to do a Q and A,” Ramirez said after the show. “We thought that was amazing; we were both like crying.”

Several people from the crowd raised their hand during the Q and A to be picked by Mensa for questions.

One student explained how she’s an “old school hip-hop cat” and said she does not like the current hip-hop scene because she doesn’t understand what they’re saying. She asked, “So how do you feel about hip-hop today? As we evolve, it should move in a different direction. How do you feel about that?”

“One key part to take from your question and think about is: ‘as we evolve’,” Mensa said. “Have we evolved? Is our society today further along and more progressive as a whole than when the music you’re talking about was made?

“Are we further along in our collective consciousness than we were in the 90s, or even in the 70s? I would say not,” Mensa said hip-hop is going to reflect where the culture is, “culture as all of our collective thoughts and ideas.”

“I think we’re at a place in time when people as a whole hit on communities that are not very progressive and the music reflects that,” Mensa continued.

His response was unexpected to me. Partly because I didn’t think he would be so honest, but another part is how Mensa adequately highlighted the similarities of our society to previous generations.

After the Q and A, Mensa performed three songs “16 shots”, “ Shades of Blue” and “We could be free.”

“It was amazing,” Ramirez said.  “I love Vic Mensa so when I got the email saying he was coming to NEIU, I was like ‘I have to be there.’ Immediately I got my ticket.”

NEIU student Antonio Brito said, “To be honest, I was a little disappointed just because it was condensed, it was short. I just wish he was there longer, but he was amazing. It was a pretty good show.

“I know that students wished the [Mensa] performance was longer, but for an hour show it’s already 50 thousand, 60 thousand dollars, and we can’t blow a year’s budget on one event,” Chanthabury said. “It would mean that there wouldn’t be more events for the rest of the semester. So how about we do a 30 minute Q and A and a three-song performance to bring it down to about 20 thousand all-inclusive.”

This show was Mensa’s first show after coming off the 4:44 tour with Jay Z. He was promoting the intentionally personal album “The Autobiography” since its release in July 2017. Mensa said during an August 2017 interview on a podcast called “Pod Save The People” that he thought “this album was like therapy for (him).”

“I wanted to use it to address the things that I had trouble speaking about to people.”

The full 15 track album also pulls hits from his earlier released EP “The Manuscript” as bonus tracks. The album cover provides clues into the vulnerable nature of “The Autobiography.”

Mensa said, “I wanna be somebody that can inform, educate and empathize through music.”

He continues, “I think this album was like therapy for me … I wanted to make music that was so overtly personal, honest and vulnerable that kids might be able to erase some of the shame that they felt from their situations.The truth of the matter is that in (the black) community mental health is hugely stigmatized, as are a lot of other things.”

“The Turn Up” was a sold-out show with 30 volunteers from Greek organizations and 10 campus officers ensuring the safety of the people.

Correction: In the previous version of the story it stated Mensa was promoting “Homecoming.” It should have been “The Autobiography.”