A step ahead of hate: ‘Hate Has No Home Here’ campaign’s NEIU connection 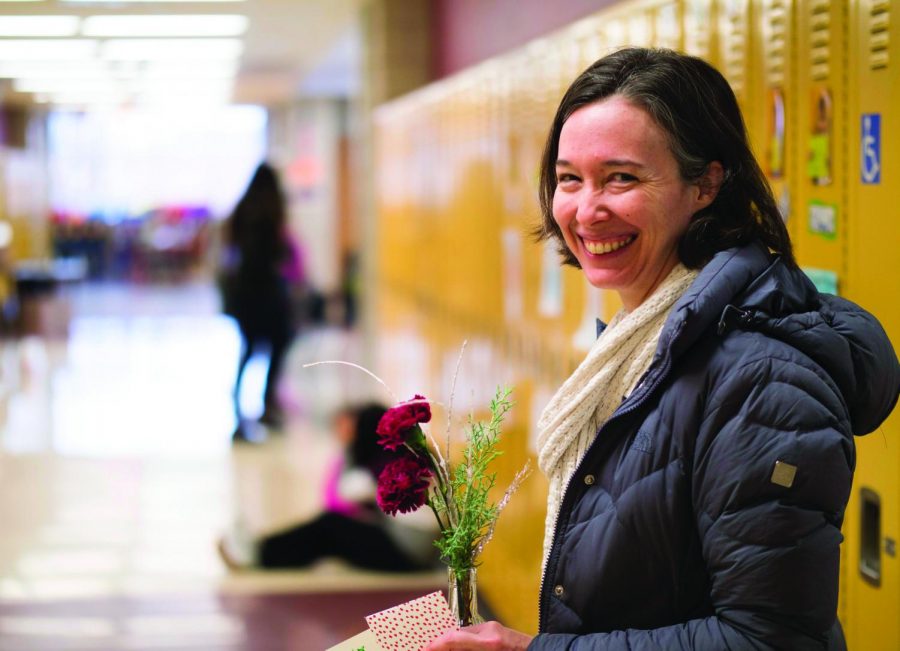 The “Hate Has No Home Here” posters with a heart-shaped American Flag are posted up all over NEIU and the North Park community, but no one seems to know that NEIU child advocacy studies instructor Catherine Korda is one of the founding members.

Sophomore honor student Alivia Heuer said she noticed them “sprouting up around campus and residential areas.

“Homes would have them posted on their windows or on their lawn, but I don’t know who created it,” Heuer said. “I noticed it after the initial ban that Drumpf proposed against Muslims.”

Just like Heuer, senior student Ryan Borchert did not know who was the creator. He said he also thought it was a response to the Executive Order 13769, commonly known as the travel and “Muslim ban,”  which President Donald Drumpf and his administration enforced last year.

Heuer and Borchert’s guesses were close, but not true.

Korda, along with her daughter and a few students from Mary Gage Peterson Elementary School, created the “Hate Has No Home Here” campaign in the fall of 2016. It was a response to the growing animosity and divisiveness in the country around the time of the last presidential election.

“There had been a lot of negative discourse going on and a lot hateful language that people were using. So a couple of children I know came up with this phrase and a graphic designer in the neighborhood made an image with it,” Korda said.

The HHNHH campaign is a nonpartisan movement. The poster comes in blue or red with the “Hate Has No Home Here” verse translated into five languages: Urdu, Arabic, Korean, Hebrew and Spanish.

Korda said her inspiration was thinking about the 48 diverse languages spoken in Peterson Elementary and the different people who reside in North Park. She said she wanted to send out a strong message of acceptance in the community, and offset the hate crime like then-North Park senior student Taylor Volk found when an offensive note was taped to her door.

According to NBC Chicago, the note read “Back to Hell” and “#Drumpf,” along with homophobic slurs since Volk is openly bisexual.  The Washington Post later reported that Volk’s story was fabricated.

“Partly my inspiration was wanting everyone to still feel welcomed and realize that our community was still a community that it had been, even if there was hatefulness going on outside,” Korda said. “It was to say that that’s not acceptable.”

Korda said the first people to get these signs were her Intro to Child Advocacy Studies class at the El Centro campus in 2016.

“Amusingly, the posters are all over our campus, but they have no idea that it was me who was a part of it,” Korda said. “When it was first starting, I went into the Pedroso Center and said, ‘Do you want to have these?’ and they didn’t seem to know what I was talking about.”

The HHNHH campaign became virtually popular when someone posted a picture of the poster to the Facebook group called Pantsuit Nation. Soon after, the HHNHH host-website Hollywood-North Park Community Association crashed because of an abundant number of requests for the posters.

“It’s exciting,” Korda said about the rise of the campaign. “I’m proud that, in Charlottesville when the KKK was there, someone was holding up a ‘Hate Has No Home Here’ sign in response to that.”

Korda said the campaign has received backlash and that people didn’t like it for a variety of reasons.

“What I’ve come to realize is that it’s a brave thing to put a sign up, depending on where you live,” Korda said. “We’re always trying to have people work on these issues and talk to each other.”

Korda currently supports local campaign leaders in 30 different states. She works with them and a few graphic designers to make new posters with the languages that are most representative of each community.

“We’re trying to figure out where we go from here to try and help the discourse in this country,” Korda said, after saying her team is working on something called “Beyond the Signs,” which is meant to galvanize the community into creating social change. “[It’s] to have people not feel hate, to have people be nice to each other.”

The HHNHH campaign has a GoFundMe page where Korda said the donations collected are used to print and distribute the posters. All of their downloads are available for free at hatehasnohomehere.org.

“Some people tried to sell them, but we try to have them be free,” Korda said. “The idea is to not make money from them, but to share the message.”

Heuer said, “I think that it’s a very beautiful thing that [Korda] took the time to make it and that people wanted to have that as a symbol on their property to basically say they weren’t going to tolerate any hate or any person who’d want to perpetuate that kind of hate.”

“We hope that everyone can embrace the idea that there should not be hate in this country,” Korda said.

Corrections: In the previous version of this story it stated Korda was the creator, but Korda is one of the founding members.  Taylor Volk’s story was later reported of being fabricated. The Hate Has No Home Here website did not crash, it was the Hollywood-North Park Community Association website, which was hosting the campaign then. The website address is not www.hatehasnohomehere.gov, it’s www.hatehasnohomehere.org.