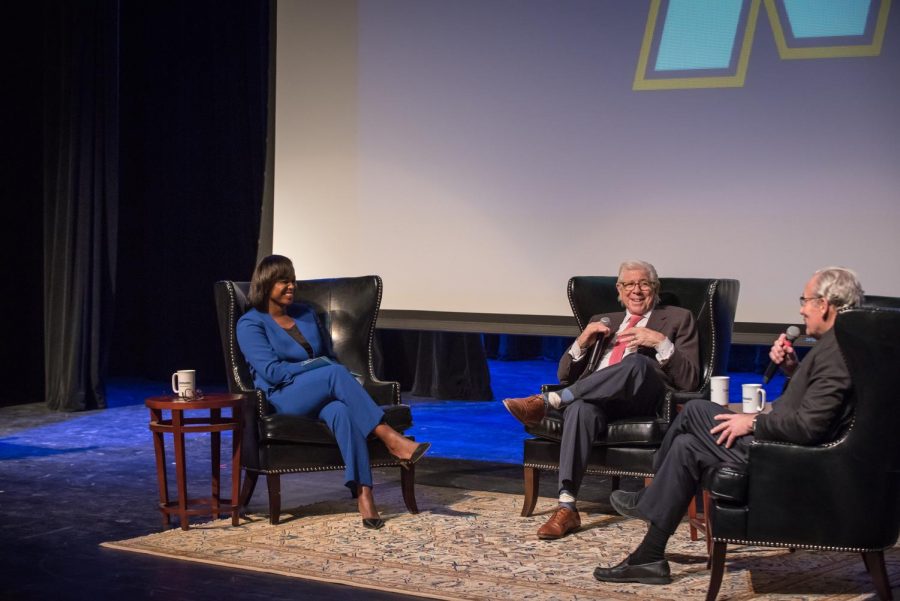 NEIU had the honor of hosting Pulitzer Prize winners Bob Woodward and Carl Bernstein on Feb. 8 as part of the Daniel L. Goodwin Distinguished Lecture Series.

Woodward and Bernstein achieved recognition for their investigative journalism work that broke the Watergate story for The Washington Post that led to the resignation of President Richard Nixon in the 1970s. They participated in a conversation moderated by NEIU’s Interim Dean of College of Arts and Sciences Dr. Katrina Bell-Jordan.

The discussion addressed various issues that are present in today’s media, allowing Woodward and Bernstein to discuss their opinions on topics ranging from the Trump presidency to the credibility of journalism today.

A big issue that has plagued the media, more relevantly than previous years, is the validity of the reporting that is being done regarding President Trump.

Issues and controversies had surrounded the president since the beginning of his campaign. Woodward, addressing the topic of the current U.S. presidency, gave insight into the ideology behind his madness.

Woodward interviewed President Trump when he was on the verge of winning the Republican nomination, and he recalled a moment when he quoted President Barack Obama saying that strength for the United States comes from restraint and humility, to which Trump counteracted by saying that “real power comes from fear.”

Bernstein, mentioning that Trump’s behavior was never seen in the presidency, reminds the audience of Trump’s “willingness to smear our institution for his personal gain.”

Despite their feelings towards the presidency, when asked about how the media has dealt with coverage on President Trump, Woodward stated, “This is the internet age of impatience and speed. Give it to me too fast. When Carl and I were doing Watergate, we had so much time. We could work for weeks on one single story, if it wasn’t ready we would hold it. Now something is done and it’s on a website and it’s revised and so forth. There is not that kind of patience.”

The credibility of media, even before the Trump administration, was under question.

As investigative journalists, both Woodward and Bernstein believe that while there is a lot of great reporting being conducted, information can only be applicable if the audience is willing to receive the message.

How much do people want to know from journalists?

Bernstein addressed questions with caution but also gave the audience the truth about the majority of today’s media audience.

“There is a huge problem. There is no metric to what I am about to say but I think one of the huge differences in our culture today, comparing it to the time of Watergate is that far fewer people are interested in what Bob and I call the best obtainable version of the truth. Rather they are looking for information to reinforce their already held political beliefs, prejudices, religious beliefs, cultural. This knows no partisan aspect or ideology.”

All the blame on the interpretation of media, however, cannot be placed on the audience. Woodward suggests that reporting has changed since they broke the story on Watergate, which The New York Times called the most important piece of journalism at the time.

“You need to break the mold on some of this. I think what you have to do is become a little introspective about the business. I think lots of reporters, including myself, become lazy to go on public television and say anything. Who cares right? Real information you get from going to people who really know. One of the things that Carl taught me when we were working together was that you go visit people at their homes when you don’t have an appointment…We are not showing up.”

“You don’t know what the news is until you’ve done that knocking on the door and that listening. But so much of what we do is to go in with a preconceived notion of all of it. We are talking about the memo, let’s find out a little more about the memo. Maybe the memo is not the news,” said Bernstein.

The best-selling authors’ advice to aspiring journalists, a question that was submitted by students at The Independent, was to understand how important it is to get it the story right.

NEIU’s third installment of the Daniel L. Goodwin Distinguished Lecture Series aimed to continue what organizers would deem a lecture series meant to inform and instill the belief that universities are a place for free speech.

Woodward and Bernstein, who appeared on our stage for the first time together since the presidential election of 2016, responded to topics about the state of our country in relations to media, reinforcing the strong belief that a free press composes democracy.