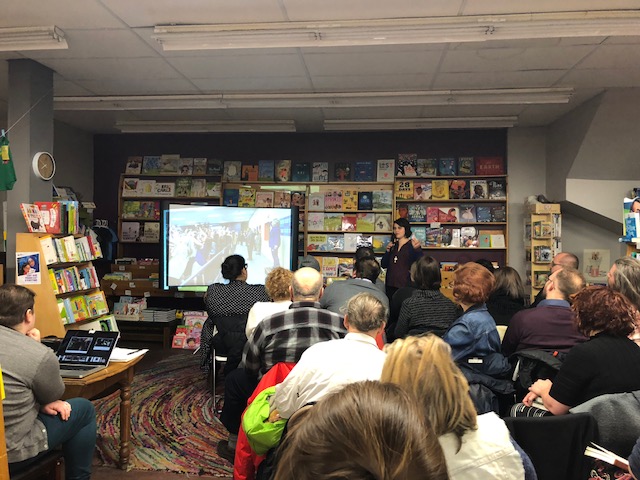 In recent years the world has been taken over by the selfie; a picture that someone takes of themselves.

They are used on every social media platform and even have their own hashtag on Instagram, #selfiesunday.

Almost everyone has fallen into the selfie trap, with front camera phones becoming the new normal. Their rise in popularity has led to criticism from those who believe that the selfie will be the downfall of the millennial generation.

So great is the criticism surrounding the style of photographs that Alicia Eler, a reporter at the Star Tribune in Minneapolis, Minn., decided to devote years of research to develop “The Selfie Generation,” a book about how selfies are changing society’s ideas on different topics.

Eler gave a book talk at Women and Children First bookstore (5233 N Clark St.)  in Chicago on Jan. 18. The talk served, not only to promote her new book but so also share information that was important regarding our culture use and perception of the infamous selfie.

Showcasing the cover of the book, composed of multiple selfies of her friends, Eler began discussing the history of the selfie, whose notoriety began rising in 2013.

One of the topics discussed was the idea that selfies have a reputation for being a symbol of vanity. We see someone taking a selfie and we assume that they are full of themselves and obsessed with their looks.

Eler raised the idea that if a woman is taking selfies of herself or looks at her pictures she is seen as vain but when the pictures are views by males, the same woman is portrayed as sexy. This topic is highly important when it comes to the value we place on selfies as a society because it represents the different values we place on male versus female opinions.

Through doing research for her book, Eler discovered that even though selfies are linked mostly with millennials, the two demographics that take the most number of selfies are teenage girls and middle age men.

Eler mentioned many different artistic platforms that have used female selfies as a way to regain the control, value, and, most importantly, their sense of self love.

While discussing these powerful examples of how the selfie can be used for good, Eler also discussed how political movements have been empowered and greatly expanded through selfies.

She mentioned selfies going viral using certain hashtags such as #feministselfie in response to magazines reporting that selfies equal vanity and a cry for help.

Eler also talked about how selfies and social media have been used to address other issues such as the controversial issue of allowing transgender people to use the bathrooms for the gender they identify with.

While some might question why selfies have been useful with these certain movements, the answer comes down to being able to put a face and a story to these issues, making them more relatable and able to connect with the public on an emotional level.

Despite the controversy around whether or not millennials are suffering and slowly “ending humanity,” Eler strongly believes that trying to censor teenagers from taking selfies is the equivalent of censoring their self-expression, which can be dangerous.

Throughout her book, Eler discussed different issues surrounding the controversy of the selfie, from addressing the positive movements that have been aided by the pictures to how people can use them maliciously as a form of revenge

Eler showcased various points addressed in her book, making the audience curious and enticed with the information she provided on a topic that will continue to be popular as social media and technology continue to grow.

However, at the end of the day, the number of selfies that are taken or the different ways people take selfies is completely up to them, and nothing to be ashamed about.

“The Selfie Generation” is available at the following local bookstores: