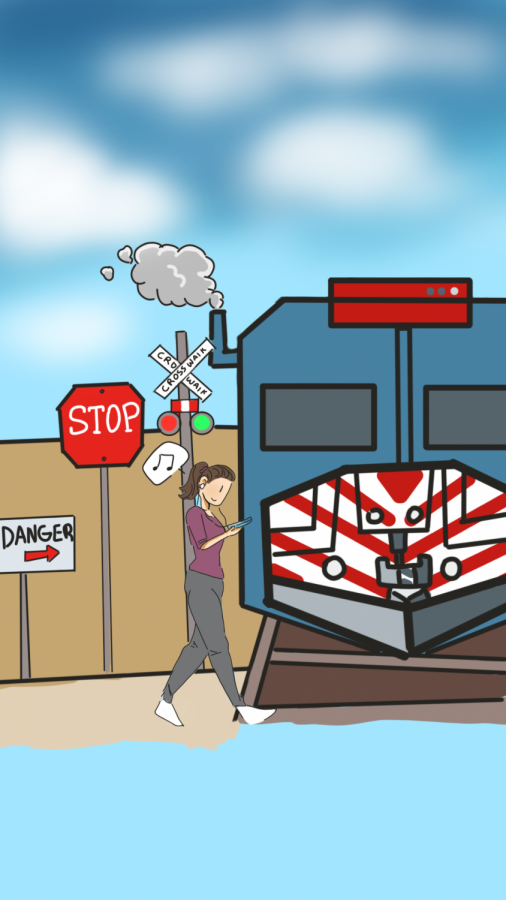 It’s no surprise as I enter one of my classes early that instead of walking into a room of people engaging with one another, I see them staring blankly at their phones.

Within in the past twenty years, the use of cell phones has skyrocketed. With the advancements in technology, people are now able to have access to social media, email, and be in constant communication with each other.

This increase in usability and accessibility has caused a surplus in popularity, according to Pew Research Center, especially since the introduction of the smartphone.

The new features and advancements have also increased the number of children that have access to cellphones. According to Growing Wireless, 56 percent of children ages 8 to 12 have a cell phone.

As more and more kids begin using cell phones, at younger ages, an important question comes into play: are we addicted to using our phones?

To a degree, I’d say yes. Go to the mall and look around, almost everyone has a phone in their hand: texting, calling, checking the latest news on their preferred social media, playing games, or taking selfies.

Recently, it’s come to Apple’s attention that the iPhone could be negatively influencing children. As reported by The Guardian, two investors penned an open letter to Apple, urging them to take action against the growing concerns of the effect of technology on younger generations.

The investors, New York-based Jana Partners and the California State Teachers’ Retirement System (CalSTRS) who collectively have control of 2 billion of the companies stock, insist that “Apple can play a defining role in signaling to the industry that paying special attention to the health and development of the next generation is both good business and the right thing to do.”

According to Reuters New York, an international news agency, there are current stockholders at Apple asking them to make an app that allows parents to limit cell phone use. Along with the app, they’re also asking Apple to do a study to see the effects of excessive use of cell phones in children.

In the 2016 survey by Common Sense Media, reported by Reuters, of the U.S teens, surveyed, half of them feel they’re addicted to their cell phones.

This is shown often through media portrayal of millennials.

For example, in one of the recent releases, “Jumanji: Welcome to Jumanji” you see the effects of cell phones with the character Bethany. Throughout the beginning of the movie she never is without her cell phone. It isn’t until she’s forced to be without it that she even interacts with the others and even socializes enough to get to know them. She literally panics at the thought of being without her cell phone.

While in the movie this is shown with comedic intent, it’s shocking how real this situation has become for most of the younger generations that have smartphones. How many times have you seen someone panic over not finding their phone? The answer is probably way too many times to count.

Teens use their phone every minute they’re able to, which is inhibiting them from the normal social skills that prior generations have grown up using. While past generations would rely on face to face communication, millennials and those younger than us turn to their cell phones instead.

As reported by The Washington Times, New York based Psychiatrist Dr. Jeremy Spiegel, founder of Casco Bay Medical reported that cell phone socialization is skeletal and often replaces face to face interaction with people on a social level.

As children are receiving cell phones at younger ages, this trend of being addicted to them is starting earlier. Articles, such as from the Huffington Post, suggest that children are starting to lack basic social interactions skills, like holding a conversation, due to their exposure to technology.

Melissa Ortega, a child psychologist at New York’s Child Mind Institute says, “They don’t know how to handle conflict face to face because so many things happen through some sort of technology.”

While the investors focused their attention on younger children, our generation does not escape the grasps of the smartphone.

Addiction to cell phones has caused normal social interaction to become that much harder for people. Instead of putting down the phone and talking to one another, people are preferring to text one another while in the same room; or simply ignore the other’s presence.

Just by walking into NEIU’s cafeteria, we can observe people on their phones sitting alone rather than engaging in conversation with fellow students.

According to Pew Research Center, smartphone usage rates are higher amongst young adults, rending our campus a sort of hub for smartphones.

Probably the most common situation seen in teens and adults is a group of people sitting together—supposedly hanging out- yet all of them are on their cell phones instead of talking to one another. I’ve been in this situation and witnessed it as well.

While it might be hard to self-confess into being addicted to our handheld technology, Addictiontiops.net has an article “25 Signs You Are Completely Addicted To Your Phone” which might be able to help.

A few signs include: you always have your phone, your battery doesn’t last the whole day, using your phone in social situations, and checking it unnecessarily and often.

So what can you do if you feel addicted to your phone?

You could start by leaving your phone in another room while you relax or simply turn it off. Another idea is to not use your phone as an alarm clock, as that forces you to look at your phone from the minute you wake up.

While phones, especially smartphones, have provided us with plenty of benefits, it is important for us to not let them take anything away from us as well. While they hold on to their appeal, getting to know those around us and being engaged is important, not only for ourselves but also for the generations who will follow our example.

So maybe we should put our phones down more often, setting a better example, and start talking and being present in the real world.