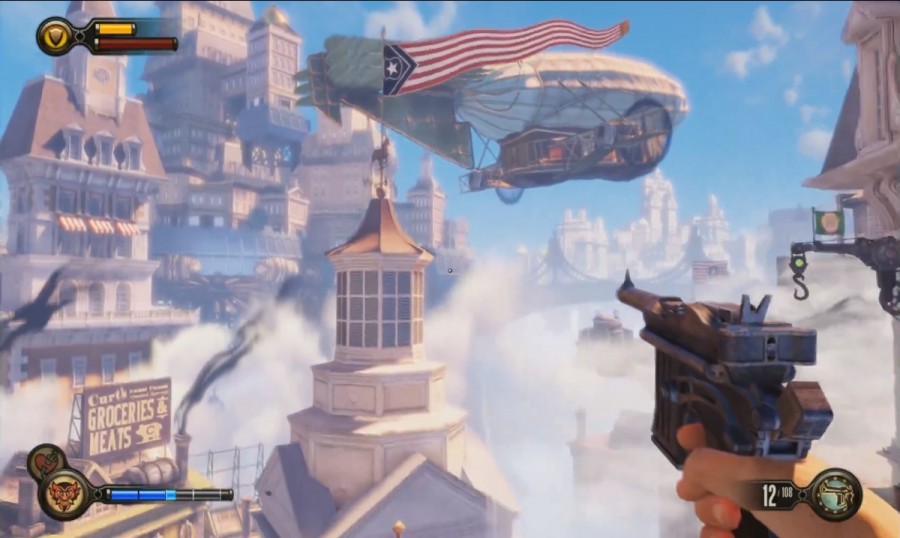 Bioshock Infinite’s finest elements can be distilled into three moments: Seeing the flying city of Columbia for the first time, seeing the emotive sidekick Elizabeth manipulate the fabric of time-space, and being able to shoot crows out of your hand at bad guys.
No, “crows” is not jargon or code for anything. A murder of crows can be manually summoned for the sole purpose of ruining an enemy’s day. However, saying that just these three moments make up Bioshock Infinite would be selling it short.
Irrational Games, creators of the first Bioshock, have crafted Bioshock Infinite to be a mixture of a beautifully realized setting, a mind-bendingly pleasing sci-fi story, and well-thought out characters, all on solid foundation of fun combat mechanics essential to any first person shooter. Individually, they would make Bioshock Infinite good, but in coming together they form a landmark game.
The game stars Booker DeWitt, former Pinkerton agent from 1912 who has developed a drinking problem and overwhelming gambling debt. In a last ditch effort to appease his creditors, he takes on job to find a girl located somewhere in the sky city Columbia. “Bring us the girl, and wipe away the debt.” Columbia has seceded from the union and has remained hidden in the clouds for years.
Arriving at the flying metropolis is one of the most visually stunning moments of the game. Not only is it graphically impressive but it also sets the tone for how its citizens live out their day-to-day life. Booker encounters flying structures in early 1900’s architecture docking with one another, a rocket levitated parade flying on by, and a carnival complete with mechanical oddities and shooting galleries. Residents can be seen travelling from island to island hooking onto a rollercoaster-like skyrail system. Players may especially enjoy a moment when a flying ship manned by a barbershop quartet appears just sing a rendition of a Beach Boys song.
However, as the player is given more free reign to explore, it is clear that Columbia is plagued with a surplus of social issues. One of Bioshock Infinites huge themes is American Exceptioinalism. Columbia believes that it is the true America to the point of religious fervor. The game turns politically heavy, as the player encounter themes of racial purity, industrial revolution-era class warfare, and even addresses contemporary events such as the Wounded Knee Massacre through its lens. With this Bioshock Infinite creates a wonderfully fleshed out fictional world to explore.
Once you locate your target, Elizabeth, it’s up to you to escort her through the dangerous escape of the city. The combat in the game allows the player to engage the enemy in an astonishing number of approaches. Not only is there an interesting variety of weapons to choose from and some satisfyingly brutal melee attacks, but booker will unlock a number of supernatural powers to use to his advantage. Launching fireballs, mind-controlling enemies, and the aforementioned murder of crows thrown the mix makes for a sandbox approach to gunplay improved from the first Bioshock.
Elizabeth has a hand in combat as well. The ability to bend time and space allows her to open up tears into alternate realities. These tears can summon up extra cover, weapon stockpiles, access to higher ground among several other environmental changes. Though she can only conjure one at a time, it further empowers the player to think about the choices he or she makes in combat.
Elizabeth’s abilities also are the basis for the sci-fi elements of the story. Through most of the story, the origins of Booker, Elizabeth, and the city of Columbia remain shrouded in mystery. Instead of throwing players for a loop and presenting plot twists, Bioshock Infinite’s riddles begin unraveling to Booker in a steady stream of story beats, culminating to an unforgettable ending. Even the Beach Boys song is explained to in the game’s fiction.
It goes without saying that sometimes Bioshock Infinite’s creases show sometimes. Enemies seem to just ignore Elizabeth in combat. The scripted boss battles feel forced, and out of place. The game also is constantly reminding you how to perform basic actions, even hours into the game. Still, in the grand scheme the little imperfections do not detract from the game’s achievements.
Anyone out there looking for a game with thoughtful shooting mechanics, an exceedingly well written story, and one of the most exciting settings a game has seen for years should pick up Bioshock Infinite. It’ll blow an expectations sky high.