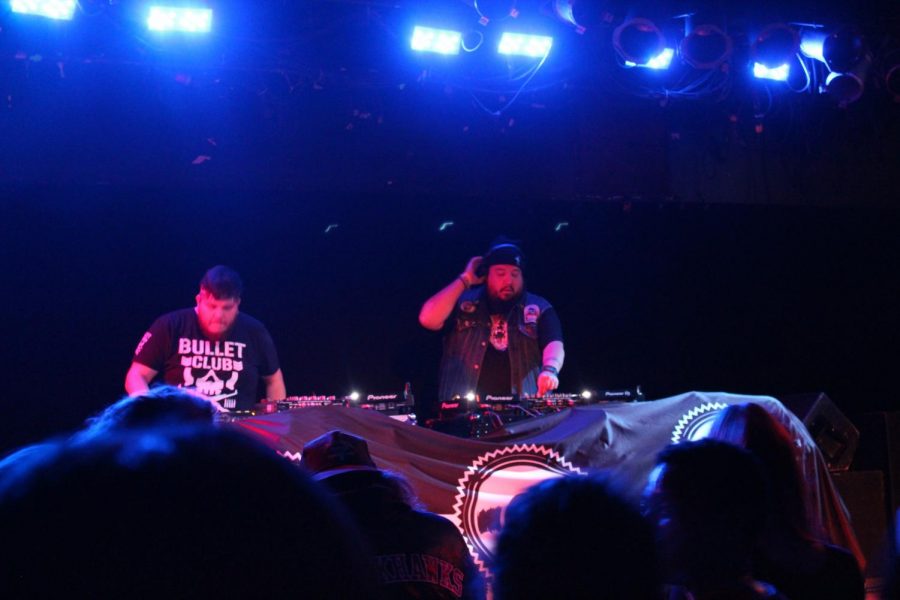 Two Native dancers mix traditional dances with breakdancing as well as traditional costume and headdress with b-boy styles to symbolize a new generation of Native youth.

Before Columbus “discovered America,” Native people lived from one end of the continent to the other. The U.S. was not the only government to force Natives into reservations. That segregation is one of the reasons there is so little representation of Native people.

A Canadian DJ collective is looking to change that. The collective is known as “A Tribe Called Red,” and is made up of three DJ’s: 2oolman, DJ NDN and Bear Witness.

The collective refers to themselves and their fans as Halluci Nation, thus giving their most recent album the title “We Are Halluci Nation.”

The collective began performing together in 2008 at Club Babylon in Ottawa, Canada. They’ve been on tour almost nonstop since the album’s release in September 2016.

ATCR’s most recent stop in Chicago on Nov. 2 brought us something we didn’t even know we were missing: Native dancers and drums on drums on drums.

DJ 2oolman and Bear Witness killed it on stage and the dancers were incredible. About 100 people moved to the deep base in the near West Side’s Bottom Lounge in early November.

The show featured native dancers performing a mix of traditional dances with breakdancing. The whole experience was extremely moving and symbolic of a new Native generation.

ATCR blends Dub-step with powwow drumming and singing from Native nations and artists around the world. They also mix into their music representations of Native people from the media. One of my favorite songs that aren’t on this album, “Burn Bridges your village to the ground” features a monologue by Wednesday Addams from “Addams Family Values.”

“We Are Halluci Nation” is ATCR’s third studio album. The album, along with the rest of the music, draws attention to colonial brutality.

They use their tour and their music to draw attention to the crisis that Native people across North America face both on and off reservations. They do this with the Halluci Nation. The nation is a concept created by Trudell, which encourages inclusion, empathy and all nations coming together.

The album itself centers around the Halluci Nation coming together and the story of “Charlie.” Chanie “Charlie” Wenjack ran away from his residential Indian school and was later found dead of exposure and hunger in 1966.

Their music and performances tie in many aspects of Native cultures including the significance of powwows, which are a time when Natives get together and can serve many different purposes.

The embodiment of Native culture by ATCR is reinforcing what the Natives have proclaimed all along, “We are not conquered people, we are still here.”

ATCR’s music is available to purchase on iTunes or Spotify or check out their videos on Youtube for the full audio and visual effect.