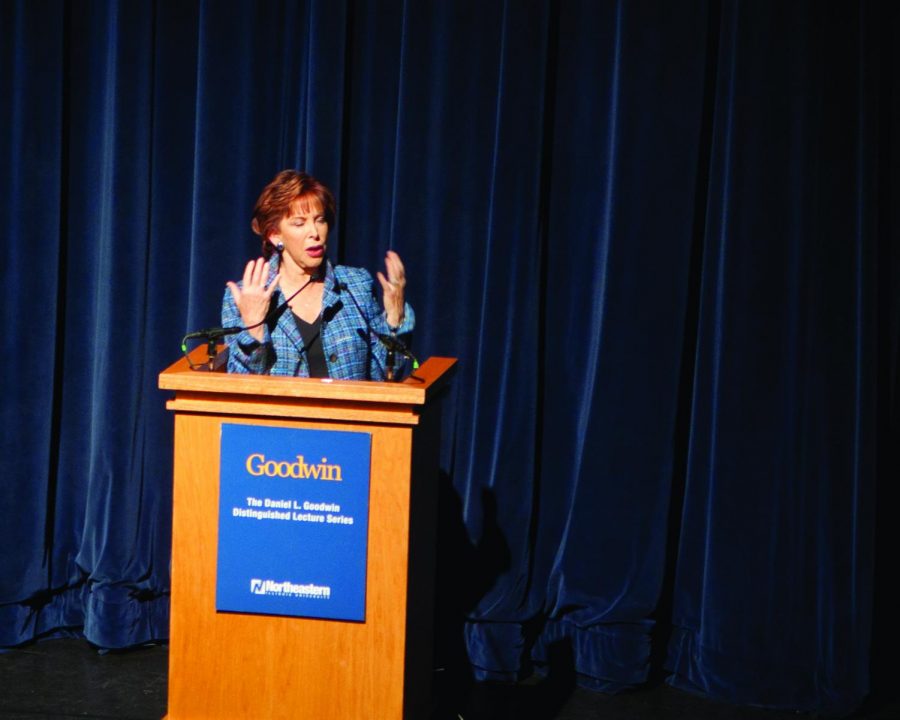 Are we hurtling toward an economic downturn?

This is just one of the questions Terry Savage presented during her discussion titled “The Savage Truth on Money” at the main campus auditorium as part of the Daniel L. Goodwin Lecture Series on Oct. 24.

She discussed the trends in the current market and how members of the audience can best plan for their financial future.

“Don’t bet against [the U.S.],” Savage stated during her opening remarks. “There have been some tough times in our past, but on the surface, it looks like things are going pretty well.”

Among the members of the audience was Interim President Richard J. Helldobler who commented on the discussion series as a whole to the nearly standing-room-only crowd.

“These discussions are part of our commitment for intellectual discourse,” Helldobler stated during his welcome comments. “We are the people and this is the place to have these discussions.”

Savage used numerous visual aids to support her stance on the economy and what people should do to invest their money to stabilize the future and how this impacts society today. She used the terminology of the bull and bear markets. Many who are aware understand that a bull market is marketed moving up, yielding profit and prosperity, while bear markets are on the downturn.

Savage reminded the audience that the bull and bear terms are used to describe markets regarding risk-yielding stocks. She also recalled the valuation of companies during the dot-com bubble, where numerous companies soared in value and seemed to become insolvent overnight when the bubble burst. As there are profits to be made from these, the risk to lose it all is just as plausible.

Savage mentioned a third way to define how people should invest their money they cannot really afford to lose. The term she used was “chicken.” This is money that will essentially yield a lower return on investment but will also lower the overall risk.

“Think about the money you want to invest to someday buy a house or send your children to college. This is money you will rely on one day, so you can’t really afford to lose it. I call this chicken money that should be invested into more secure avenues,” she said. “What do you do with money that you don’t want to lose, or can’t afford to lose? You stash it in a safe place, like insured deposits in a bank.”

Following the discussion, Savage fielded questions from members of the audience and provided informative responses to every query. The scheduled book signing did not happen due to the lack of time.

Daniel L. Goodwin, the series namesake underscored the need for the discussions.

“I am a big advocate of free speech and we want this program to stimulate thought and bring forth new ideas,” Goodwin explained.

The Daniel L. Goodwin Distinguished Lecture Series was created in 2015 by Daniel L. Goodwin, Chairman, and CEO of Inland Real Estate Group of Companies, as part of his historic $2.5 million commitment to NEIU. The lecture-series fund provides support to bring prominent and well-respected thinkers to the university for presentations in conferences, seminars and major lectures.