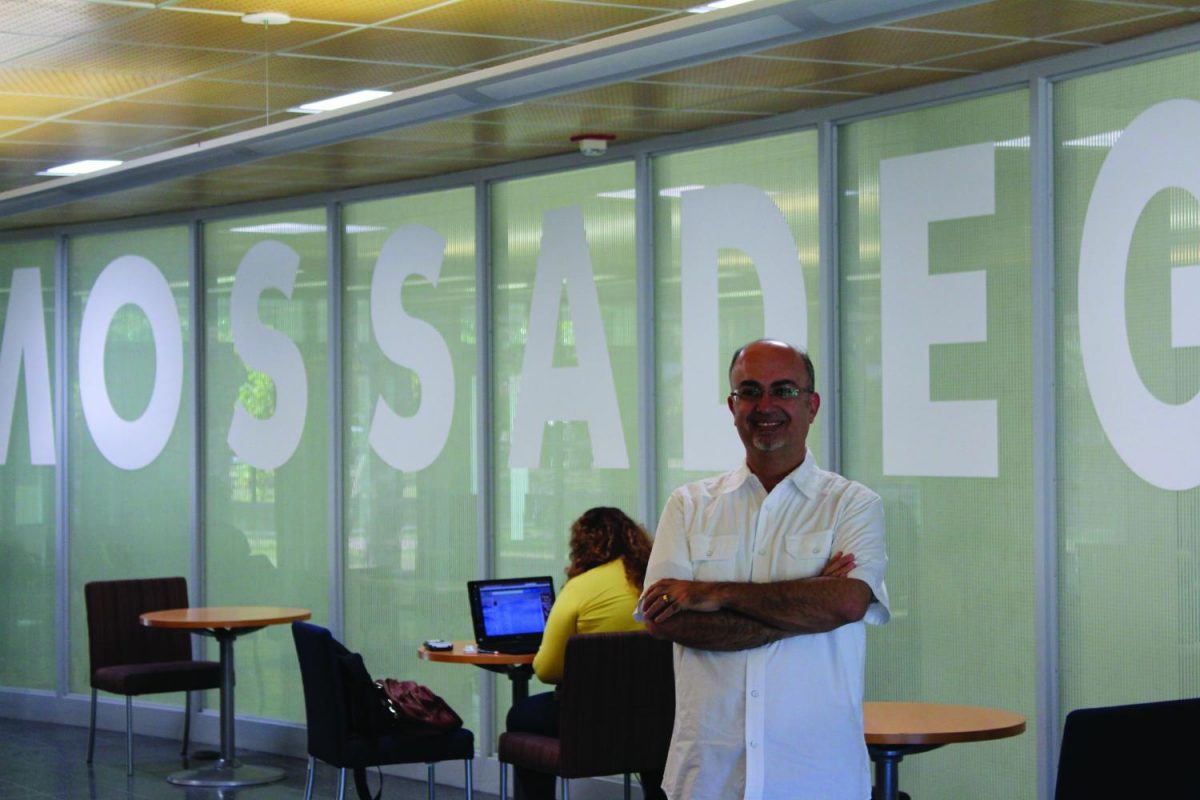 If you have ever been in the College of Business and Management at NEIU, you probably come across the Mossadegh Servant Leaders Hall, where many students gather together to study or spend time with their classmates.

The idea for the Mossadegh Hall began when a group of Iranian faculty members, along with hundreds of Iranians from across the U.S., helped create the Mossadegh Fund to name the hall after Mossadegh (Prime Minister of Iran from 1951 to 1953 who is mostly known for nationalizing the Iran’s Oil Industry).

Its inaugural principal, Dr. Mateo M. Farzaneh, explained more about Mossadegh and the initiative under his name to make NEIU community more familiar with him and his legacy.

Dr. Farzaneh is an associate professor in the history department and teaches the history of the modern middle east and the Islamic Civilization at NEIU since fall 2010. Farzaneh was appointed by the university on June 7, 2017, after a discussion with now retired President Sharon Hahs and the Vice President of Institutional Advancement Liesl Downey.

Dr. Farzaneh is also the author of  “The Iranian Constitutional Revolution and the Clerical Leadership of Khurasani” and is currently working on his second book called “Iranian Women and Gender in the Iran-Iraq War.”

“In 2010, Dr. Hamid Akbari, who was a professor of Management and Marketing in the College of Business, along with his wife and some other Iranians, thought about the idea of creating a foundation or a fund under the name of Mossadegh,” Dr. Farzaneh said on the Mossadegh Initiative. “Also adding to it the concept of servant leadership which is used as a business model at various business schools. That is why this fund was established in the College of Business and Management.”

In addition, he said Dr. Akbari and his colleagues headed an international campaign where Iranians, and those who appreciate Persian culture and the concept of servant leadership, contributed $250,000. They named the hall “Mossadegh Servant Leaders Hall” after Dr. Mossadegh;  it is now a study hall in COBM at NEIU.

Who exactly was Dr. Mossadegh and why is he so important in Iran’s contemporary history?

“He was the prime minister of Iran who was overthrown by the British and the American government through a coup, now referred to as generally The Coup of 1953,” Farzaneh said. “The most important contribution Dr. Mossadegh made was the nationalization of the oil industry by taking away the British monopoly over Iranian oil industry and placing Iranians in full control of their petroleum business. He died under house arrest in 1967.”

How does The Mossadegh Initiative contribute to NEIU and its students?

Farzaneh explained that “from the income that Mossadegh funds generate, the NEIU Foundation has created two sets of scholarships: one at COBM and the other at the College of Arts and Sciences.”  He reiterated the fact that students should look for calls for scholarship applications which are due Oct. 1 from both colleges. In addition, he said we have an annual keynote lecture scheduled for spring of 2018.

“Not only will we continue the same funds that were created and established in 2013, but will now add more money through fundraisers to the scholarship base, in order to cover more students,” Farzaneh said. “We are trying to raise funds to offer Persian language classes starting in 2018 and launch a scholarly article competition award that is solely about Dr. Mossadegh, his legacy, and the history of nationalization of oil in Iran.”

There is an important fundraising event coming up on October 21 at NEIU, where an honored guest is expected to attend.

“We are honoring Mr. Ghobad Fakhimi who was a high-ranking executive in the management of the NIOC [National Iranian Oil Company] during Shah’s time and after the revolution in 1979. He is a highly regarded and devoted manager and regards Mossadegh as a role model for service and servant leadership. He has personally contributed a great deal to the success of the servant leadership campaign that was completed in 2013,” Farnazeh said.

Mr. Fakhimi is the author of the book “Thirty Years Iran Oil: From Nationalization To Islamic Revolution.”  His talk is titled, “Pragmatic Petroleum Management Towards Naturalization in the Iranian Oil” and takes place on Oct. 21.

Anyone can attend and benefit from Fakhimi’s experience as an oil executive through his talk and enjoy the plentiful Persian food that will be served along with spirits.

Tickets are $75 per person including dinner and beverages and all proceeds will help us build the fund necessary to offer Persian language classes and expanding reach within the community.

Anyone interested to learn more about The Mossadegh Initiative and look at photos and other interesting references to the past they can visit neiu.edu/mossadegh.