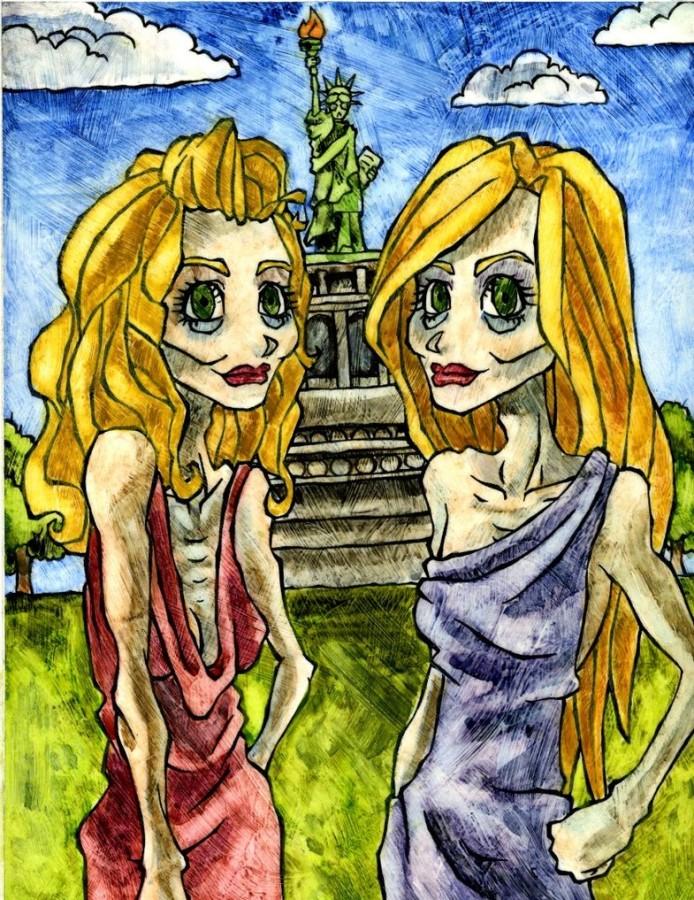 Israel passed a law banning models with a body mass index (BMI) below that of 18.5 from appearing on the runway. The law is thorough, requiring models to produce a medical report, no older than three months, at every shoot which states that they are not malnourished. The bill also includes a ban on underweight models in advertisements and a requirement for publications to divulge their attempts at altering images through Photoshop in advertisements. The bill sparked controversy as it brought into question the free-speech rights of the fashion industry, and whether or not these rights are more important than the psychological well-being of its customers.
BMI is a calculation of height and weight that is then categorized into either underweight (<18.5), normal (18.5 – 24.9), overweight (25.0 – 29.9), or obese (>30.0). As an example, a female who is 5 feet, 8 inches tall can weigh no less than 119 pounds. While this system is in no way perfected, it is noted by doctors as the most efficient way to categorize an individual across international standards.
Rachel Adato, an Israeli parliament member and former clinician who advocated the bill had this to say, “In Israel, there are 1,500 new cases of eating disorders every year, and 10 percent of teenagers suffer from eating disorders. Israel’s population is only 7.5 million, making the high rate especially alarming. We also know that the first cause of death in the age group of 15-24 is anorexia, so when you hear those numbers, they’re frightening. Agencies say ‘all of our models are eating perfect they’re just skinny’ but it’s not true and we know it’s not true,” Adato insisted. “Only 5 percent of girls that are under 18.5 BMI are girls that are eating well in Israel.”
Psychiatrist Daniel Le Grange, director of the eating disorder program at the University of Chicago, believes, rather, that the Photoshop laws that Israel has included will have a more profound impact, “No one is that perfect, no one has Photoshop on their faces all day long. It’s very discouraging for our patients who for one reason or another desire that perfection and they page through every magazine and see every face that’s perfect. It’s easy to get scooped up that, ‘I should look perfect because they all look perfect.’”
While Israel joined Milan and Madrid, who have also placed a ban on models below an 18.5 BMI, the U.S. on the other hand has no intention of passing any such laws. According to CEO of the Council of Fashion Designers of America (CDFA) Steven Kolb, the CFDA has no plans to push for a U.S. law. “We never had an approach of mandate or enforce. We create awareness and education.” What form that “awareness” and “education” takes was not made clear.
But how problematic can a media that is obsessed with skinny be? Alina Viola Psy.D., had this to say, “I think it’s interesting because Northeastern has such a diverse population. In the media, and even in the mental health, there’s a tendency to still think of anorexia as a young, white, middle-class woman’s issue. And this is certainly not the case. Eating disorders are also a problem within the Latina community and among many men. But there’s not always a lot of awareness about it among these demographics. It’s usually only watched out for among young white women. “
When asked if eating disorders are an issue among college campuses she said, “Certainly, our relationship with food is very distorted as a population. Media plays a role in this, though there are always deeper underlying issues when it comes to an eating disorder. But of course, when we have a culture that it obsessed with skinniness it has its impact on people.”