Board of trustees: looking forward during a time of crisis 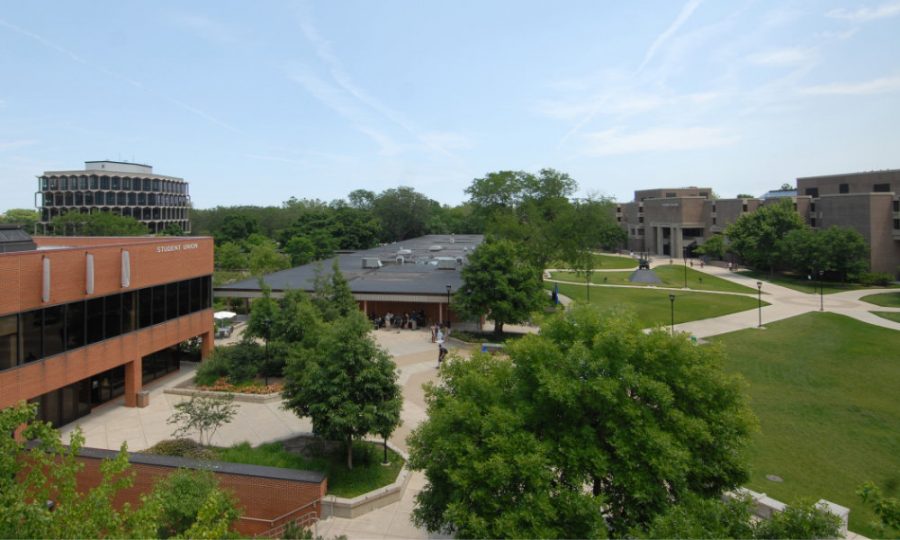 The future NEIU seeks to give students the traditional college experience.

NEIU’s Board of Trustees regularly scheduled meeting began with the discussion of newly implemented furlough days from April 11-12 and May 1.

Cost and salary-savings plans are part of the furlough program in order to keep the university running during the budget crisis, including a spending and hiring freeze that is estimated to provide $3.5 million in savings.

“The university will pause the furlough program as soon as it is financially able to do so,” Interim President Richard J. Helldobler said. “The university’s end of January national analysis demonstrated the need to save about $8.2 million in order to process general operations and payroll to the end of the fiscal year on June 30 (and) an additional $16.7 million to do so until Sept. 30, unless additional state funding is provided.”

The furlough days during Spring Break were a result of the university’s goal to maximize savings.

Helldobler said Spring Break was chosen for the furlough period because it would have had the least amount of impact on instruction. Cuts to employee’s gross salaries for the five furlough days over Spring Break are spread over five weeks of pay.

The decision to implement three more furlough days was contingent upon an agreement between university leadership and the various bargaining units and unions.

Despite the implementation of three more furloughs, the Board approved 12 candidates recommended for tenure.

The Board proposed the idea of bringing residence halls to the 3400 block of West Bryn Mawr Ave., which is estimated to take about two and half years to complete. According to American Campus Communities, the company that manages and operates The Nest, student apartments will be at full capacity in the fall of 2018. The Board also discussed campus improvements that will start with the Physical Education Complex roofing and exterior, expected to be completed by the end of June.

“The Nest has been a successful endeavor for the university,” Helldobler said. “Incorporating the residence life component to the university has allowed NEIU to recruit and retain more students to better engage students with the university’s community, peers, professors, staff, clubs and organizations, and enable them to have a traditional college experience. NEIU is ready to explore the possibility of phase two.”

The Board discussed the request for proposal to hire an executive search firm that would serve as a catalyst to cast a national hunt for the next NEIU president.

“I think the timing probably could not be any worse (than) at this time,” said Trustee Jonathan Stein, chair of the Board’s finance committee. “I don’t think we would be able to attract someone who would want to come into this, literally, a mess.”

Stein said that NEIU has to have a continuity in leadership.

“I would advocate tabling it for now,” he said.

The endeavor to hire an executive search firm would cost $98,000 and the motion was carried after a time of deliberation and vote.

“If we think in terms of waiting for the state’s financial troubles to settle in order to remove the interim adjective, we’re talking a long time,” said Trustee Jim Palos, a member recently appointed to the NEIU Board.

The Board discussed the decision to honor Valerie B. Jarrett with a conferred Doctorate of Humane Letters for being the 2017 Spring Commencement keynote speaker. The high-profile keynote, known for her work as a Chicago lawyer, civic rights advocate and adviser during the Obama-Biden administration, has confirmed her acceptance of NEIU’s invitation to speak at the May commencement and will be bestowed an honorarium of $30,000.

Jarrett’s speech would come less than a year after leaving the White House however concerned members of the Board questioned the amount of the honorarium.

“It’s already assigned and there is a contract,” said Board Chair Carlos Azcoitia.

Trustee Eduardo Garza is also a newly appointed member to the Board and responded: “We just had extensive conversations about the financial state that we’re in. I find that disturbing that we’re paying someone $30,000 at a time of crisis. I just want to go on record.”

Helldobler said that expenditures between $50,000 and $99,000 are reviewed by the Board but anything below $50,000, university leadership has the capacity to negotiate. He also said that the honorarium amount is not above what they have paid speakers in the past and this will be the first commencement many graduates and their families will attend.

“Why should they have less? To me it sends a message that somehow first-generation, minority students should somehow have a lesser commencement than someone at an elite institution,” Helldobler said. “It is a classist and elitist argument. That is a nail I am willing to die on, because these kids deserve it.”