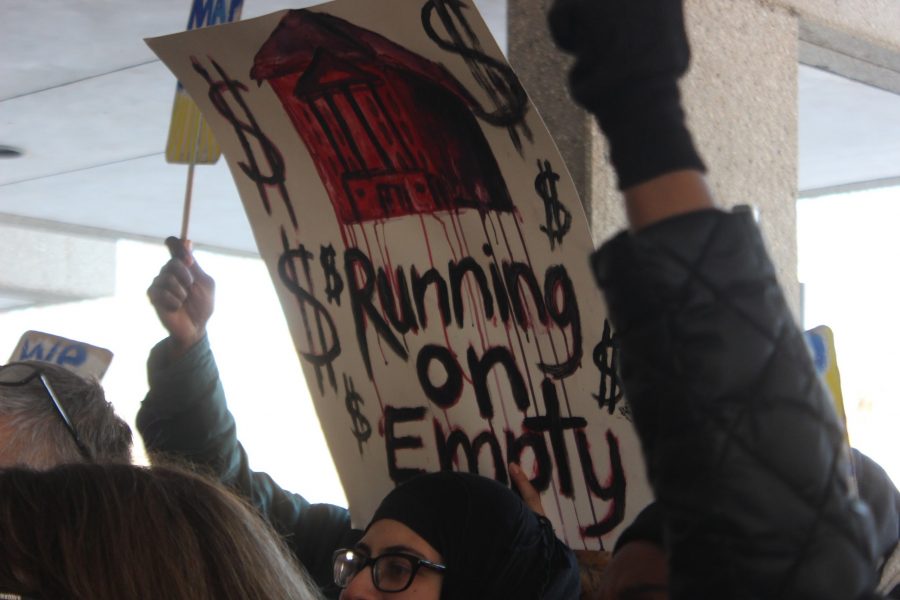 Anger and disappointment were themes of the day during the ral- ly that attracted more than 100 at- tendees.

Speakers and protesters gathered in front of news cameras while chants of “Bruce better have our money!” and “¡Un pueblo unido no sera vencido!” echoed throughout the northeast entrance of Lech Walesa Hall on Bryn Mawr Avenue. The Spanish chant is loosely translated to “A community united cannot be defeated.”

NEIU/UPI called a press conference and rally March 16 as a response to the lack of funding from the state government to public universities.

NEIU faculty, staff and students attended the rally to voice their displeasure.

“This isn’t just about this university, this isn’t just about us, this is about the future of Illinois,” said Sophia Mihic, president for the UPI chapter bargaining group at NEIU. “Governor Rauner doesn’t listen. He’s not hearing us; so let him hear us know now. Full funding now!”

University leadership at NEIU recently imposed furlough days – unpaid days off – in an attempt to save money and keep the school open. The furlough days resulted in five consecutive days that are to be paid out over five weeks, an approximate 20 percent cut in salary to faculty and staff.

Ruby David, a senior and English major admitted to reconsidering her goal of achieving a masters degree from NEIU due to the budget impasse.

“It never occurred to me that a budget crisis would have me rethink my goals,” David said. “However, this crisis will not hold myself back or anybody else back reaching their goal. Even though we feared we were going to close last semester, we did not close. We returned and we will keep on returning.”

NEIU has been operating without monetary appropriations from the state for more than 19 months.

Elizabeth Villareal, program specialist for NEIU’s Proyecto Pa’Lante, said that she could not have completed her education without the financial assistance of the Monetary Award Program, a grant funded through the State of Illinois.

“Invest in our educational system,” Villareal said. “Stop taking the money away. Enough is enough.”

The state government has also halted the disbursement of the MAP grant that largely aids public university students.