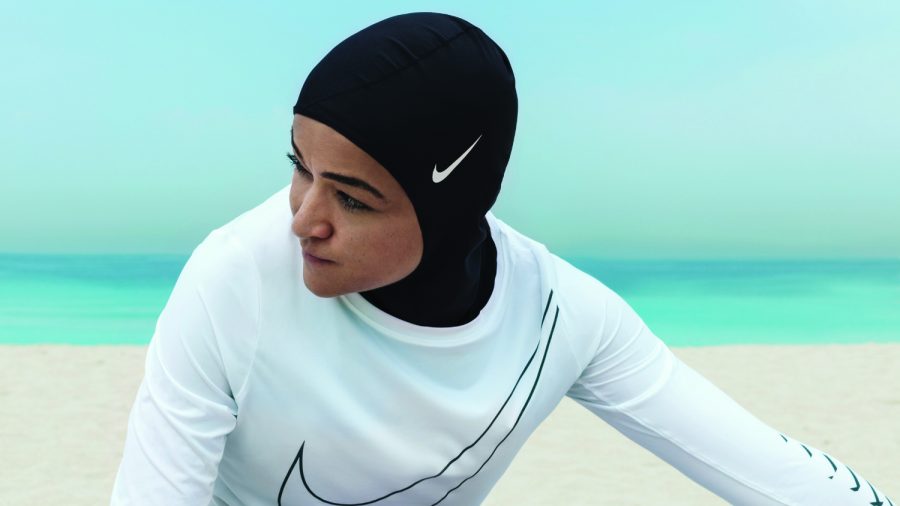 Muslim athletes like Zahra Lari and Manal Rostom get the chance to perform freely in their respected sports with the introduction of Nike’s Pro Hijab.

In the advertisement, five female athletes were featured under the tagline: “What will they say about you?” This was meant to encourage Muslim athletes to pursue their dreams. The single layer pull-on made from lightweight polyester in dark and neutral colors will be available for sale in spring 2018, after Nike spent 13 months designing the piece.

The hijab is opaque, a requirement for hijab-wearing women, but still breathable as the fabric has holes that are microscopic.

The world-known company began developing the product after various Muslim athletes complained about wearing a traditional head scarf during professional competitions, as the issue of comfort has always been a problem.

Headgear must not slow the athletes down or distract them from executing a top performance, a difficulty when finding hijabs designed to meet the requirements for competition. Such troubles inspired the Pro Hijab project.

Throughout the different stages of development of the product, which is expected to cost $35, it was tested by various international Muslim athletes such as Zahra Lari, the first figure skater from the United Arab Emirates, Manal Rostom, a runner and triathlete and Amna Al Haddad, an Olympic weight lifter.

Helio de los Santos is a member of the NIKE Ekin program. He’s a part of the company’s outreach squads that act as storytellers tasked with spreading the word on Nike’s new products and technologies.

“Nike is all about creating and engineering their products through the lens of the athlete and helping them perform at their best. There was a need for a garment that provides not only the coverage that you get from a traditional hijab but also offers all the performance aspects that we build into our products like breathability and sweat wicking technology.” Santos said. “The Pro Hijab is the first of its kind and for Muslim women everywhere that wear a Hijab, this is a way for them to participate in sports with increased confidence and a sense of empowerment,”

The Pro Hijab falls under Nike’s Equality Campaign, and as he explained “By Nike’s definition, if you have a body you are an athlete. Being defined by your actions on the field of play and not by your looks or beliefs is an integral part of the message. That means that all athletes everywhere can share in the brotherhood or sisterhood of team and sport and apply that off the field in their lives daily.”

Chriz Cordero, a campus recreation intern and health and wellness major at NEIU, works on a daily basis at the P.E. Complex.

“I see girls wearing hijabs at the gym so I believe that the high-performance hijab would be great for Muslim women to use because it would be easier for them to work out.” Cordero stated. “I haven’t worn a hijab before, but I’m sure it could be a little uncomfortable or it makes them sweat more. The hijab could motivate more Muslim women to work out if they feel comfortable wearing it.”

Cordero continue by stating “There are no judgments toward anyone inside the building, and I have never encountered a conflict that involves Muslim women wearing hijabs. There is also a Zumba event taking place next week located in Campus Rec and sponsored by the Muslim Students Association, where all women are invited to dance and have a great time.”

Sumayyah Zaki, the secretary of the Muslim Student Association at NEIU, considers the involvement from such a big brand like Nike an opportunity for people to become more tolerant especially in the current political context where there is so much racial hate around the world.

“There is discrimination everywhere, even in sports, and being a woman just makes you an even shinier target.” Zaki said. “My hijab is my identity and it’s always on my head, so I wouldn’t take it off while I’m playing sports. I am very glad that now with this new hijab that Nike is launching it’ll be cool to try it on and play sports.”

The MSA is also hosting an event called “The Hijab Challenge” on March 27 and 28 , where they will be handing out free hijabs in Village Square for female students, faculty and staff members to wear them and show their support to the Muslim community.

On April 6  there will be a follow up discussion on how and what kind of experiences the challengers have witnessed because of wearing the hijab, and food will be provided.