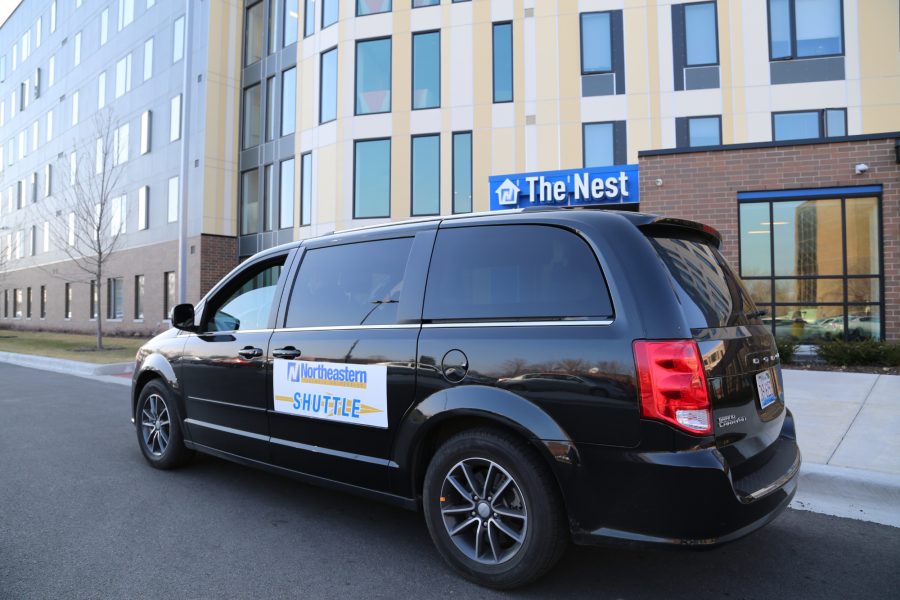 All aboard! NEIU’s new shuttle takes students where they need to go.

For now, the shuttle is a pilot program, funded through student fees, that has already been running for two weeks. It is currently being assessed and tested, operating only on Tuesdays, Wednesdays and Thursdays.

Kyle Burke, director of student union, events and conference services, said students might see shuttle services during the fall semester if the pilot program is successful.

The shuttle will drop off and pick up students at regularly scheduled times starting from The Nest, continuing southbound to the CTA Brown Line, El Centro, and finally arriving at the Jacob H. Carruthers Center for Inner City Studies.

It will then circulate back northbound, starting at CCICS and ending at The Nest. The shuttle will park directly in front of the buildings and behind the Kimball bus stop near the Brown line.

Following a tight schedule and anticipating traffic patterns, the shuttle will start to depart from The Nest at 8 a.m., ending the service at 6 p.m. The shuttle also has “buffer times” in case it arrives too early at the pick-up or drop-off locations and will wait to get back on schedule. These times might be impacted by traffic or weather conditions and are subject to change, but will generally follow this schedule.

“The program has been a long-time ‘wish’ for both the CCICS and El Centro locations,” Burke said.

The service is first-come, first-serve and the shuttle is designed to help students avoid taking the bus or driving during heavy traffic times, especially for students who have classes at multiple locations or need a ride to the CTA Brown Line.

“I do wish that the pilot program is successful because from my experience so far I have had with one passenger, it was very helpful to her,” said Aryanna Jackson, driver for the shuttle. “I think that the shuttle has so much potential. If it gets advertised more … then it could grow.”

Students are encouraged to arrive earlier to the locations in order to obtain a seat, as the shuttle can only fit a maximum of six students. A valid NEIU ID is required to ride the shuttle, as well as an authorization form students will be required to fill out.

Forms will be available in the shuttle in case a student hasn’t filled one out. The shuttle will not run during Spring Break or the summer semester.

Currently, students with at least six-credit hours and the standard Illinois driver’s license can also apply to be drivers by contacting Kyle Burke. A timetable of arrival and departure hours can be found on NEIU’s website by searching under Student Union and Information Center/Box Office.