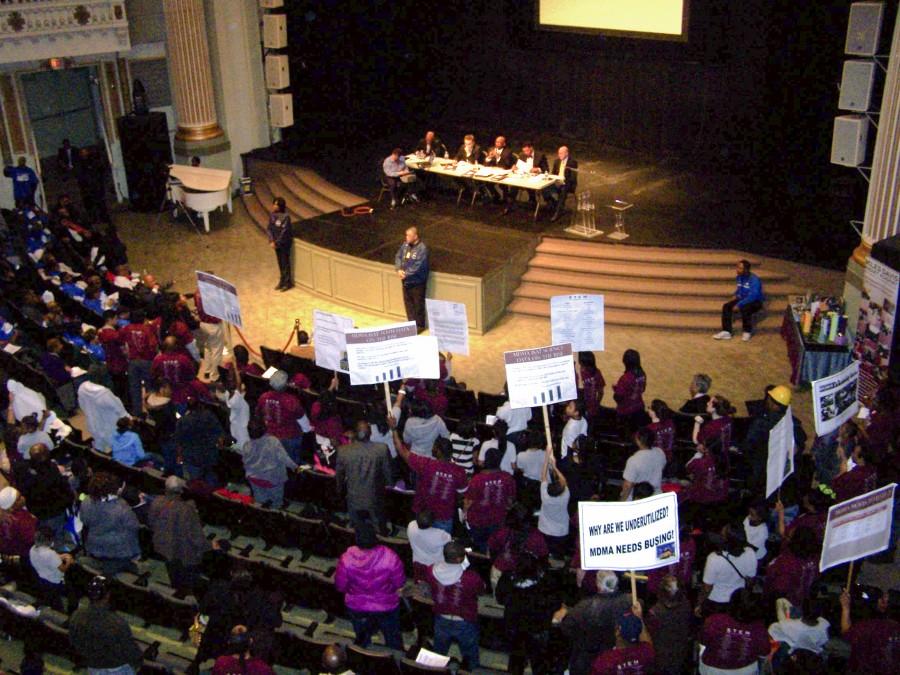 Since Jan. 28th, hearings have been held by Chicago Public Schools (CPS) in the city’s neighborhoods to solicit public input on the closing of 129 public schools. The list of 129 schools was reduced from 330 schools on Feb. 13th. Community hearings in the Pilsen, Lawndale and Englewood neighborhoods have been especially contentious, as each area has been slated to experience the closure of dozens of public schools.

The number of potential school closings is unprecedented in Chicago, but it is aligned with the national policy of transferring public schools to privately run charter operations and the decline of teacher unions. Similar school actions have taken place in Detroit, Oakland, Philadelphia, Cleveland and New York City. Currently the cities with the largest percentage of charter schools, including New Orleans and St. Louis, also have the lowest percentages of unionized teachers and some of the highest poverty rates in the country.

The school closing hearings, billed by CPS as “utilization hearings”, have been held at churches and community centers across the city from Altgeld Gardens to Rogers Park. Perhaps indicative of CPS’ desire to achieve public input in its policies, the venues for public hearings have often changed just hours before the scheduled meeting time. The Lawndale hearing switched from 1308 S. Independence Blvd. to 3531 W. Roosevelt Rd. just hours beforehand, as did the Englewood hearing, moving from 6810 S. Ashland Ave. to 7859 S. Ashland Ave.

At the Lawndale hearing, as soon as the CPS officials announced that 129 schools were on the list, they were unable to continue with their presentation amid a unified chant from the audience of, “No school closings”. CPS officials attempted to continue their presentation, but they were interrupted by chants of, “Whose schools, our schools”. In Englewood, CPS officials were drowned out by shouting and could not proceed with their plan to announce 19 school closings in the immediate area as the crowd began chanting, “No school closings”. Members of the public were unable to enter the packed meeting in Pilsen, as members of the Chicago Police Department blocked the entrance to the hearing with personnel using bicycles lined up in formation. People banged on the auditorium’s doors in order to enter the hearing, but they were unsuccessful in their attempts to join the crowd inside.

Why CPS is planning to close 129 schools is only clear to the mayoral administration and CPS. Members of the public have been left to speculate. According to CPS, the 129 school closings were decided based on rates of “utilization”. Utilization percentages have been determined by CPS and are related to the number of classrooms and resources filled with students in each school. As evidenced at the hearings, CPS’ equations to determine utilization rates have been questioned by members of the public. Teachers and students asked why computer labs, gymnasiums, special education classrooms, foreign language labs, science labs and community health clinics are included in the utilization rate as having zero students.

Students, parents, community members, teachers, social workers, counselors, principals and alumni all spoke at the public hearings. Each school is allowed three speakers to talk for a maximum of two minutes each. That means that every public school has six minutes to present its case in order to avoid being closed. CPS has appointed a panel of people to hear the testimony of the public, and the panel members regularly interrupted speakers to alert them of the expiration of their time to speak. The CPS panel members are closely tied to Mayor Rahm Emanuel and charter school consultants.

In Englewood, community members presented the panel with a pair of athletic shoes once owned by a student killed by gang violence after his school closed. In Lawndale, children as young as six years old pleaded with tears in their eyes to keep their school open. Administrators and staff members spoke about schools as safe havens, oases among the violence and poverty plaguing many of Chicago’s communities. Audience members cheered those who proposed an elected school board for CPS, virtually the only school district in Illinois without one.

CPS alumni spoke in positive terms about their former schools, and social workers spoke to the destabilizing effects of school closings. A very desperate plea to stay open came from Miles Davis Magnet Academy in the Englewood community, where students learn from a curriculum dedicated to engineering, science and technology. Members of the public can only surmise why CPS and Mayor Rahm Emanuel would wish to close a school dedicated to mathematics and science in a predominately African-American community.

CPS’ CEO Barbara Byrd-Bennett has stated that no master list of school closings exists as she continues to solicit the public’s input, although a leaked internal document makes it clear that such a list is in place. Mayor Rahm Emanuel has promised charter school operators a 40-50 percent stake in controlling Chicago Public Schools by the year 2015.

Whatever the outcome, Chicago will not be the same after the school closings. Public education could suffer a major setback, although political organizing across socioeconomic lines in Chicago has been unprecedented, with some speaking of a Harold Washington type moment in city politics. The final list of schools to be closed must be released according to state law by March 31st.

Students and readers interested in the school closings and education policy in Chicago can attend a public symposium at NEIU on Thursday, March 7th, 2013, in Lech Walesa Hall, Room 1002, from 6pm-8pm. The symposium, sponsored by the Angelina Pedroso Center and Students United for Education Justice, will feature a panel composed of Rhoda Rae Gutierrez, CPS parent and member of Parents for Teachers, Jitu Brown of the Kenwood Oakland Community Organization, Byron Sigcho from Teachers for Justice, and Carol Caref from the Chicago Teachers Union. This event is free and open to the public.