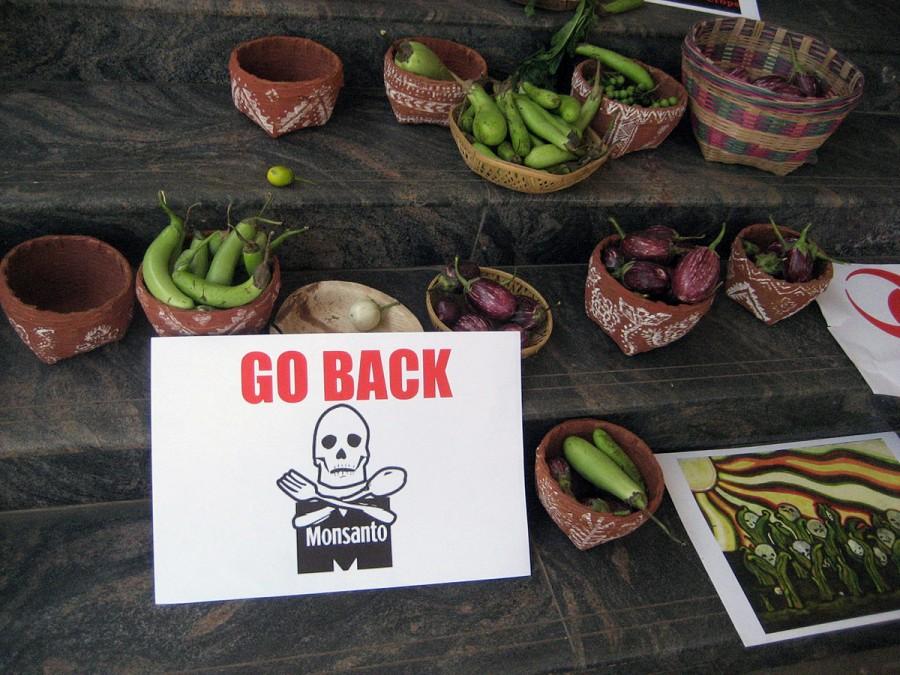 It should not come as a surprise that corporations run our country. Using finances to influence political agendas, Monsanto is just one from a long list of corporate greedheads that uses profits to further self-satisfying intentions, regardless of the casualties. Countries all over the world have labeled Genetically Modified Organisms or GMO’s in markets so consumers can make informed decisions about the swill they shovel into their body, so why don’t we? Money.

Companies like Monsanto “donate finances”, a euphemism for legal bribes, in order to stop such labeling because it hurts profits. Monsanto is not to blame for these injustices; corporations only care about larger profit margins so this behavior is nothing new or unique. Instead, our indignant mistrust should be directed towards the largest corporation in America, the government.

President Obama blatantly promised to have GMO’s labeled so consumers can make conversant choices about the products we ingest. Yet in true red, white, and blue political fashion, new Monsanto “Franken-foods” are getting approved left and right with no reprieve because politicians of every persuasion are unaware of the correlation between campaign promises and duties once elected.

Monsanto has products range from the “production of industrial chemicals to 90 percent of the world’s genetically modified seeds.” Heavily involved with the Manhattan Project (creation of the first nuclear bomb) as well as the genius minds behind Agent Orange (chemical warfare), Monsanto is no stranger to wreaking havoc on the living in order to line the pockets of the ethically dead. With this kind of history is it any surprise they are hesitant to avoid the GMO food label, associated with health concerns, in order to keep sales high? Red Cross estimates over 1 million in Vietnam are disabled or have health problem because of Agent Orange chemicals, profit maximization at the cost of human lives, should not come as a shocking revelation.

Now on the cusp of a Supreme Court ruling of Farmers v. Monsanto, we have yet another opportunity to witness the degradation of justice in this country as money dictates laws yet again. For centuries, farmers have reused seeds from a harvested crop in order to plant again during the following season. Monsanto, in an effort to pollute every good and decent thing in this world, has made this practice illegal and with the help of our “justice” system, will also bankrupt hundreds of farmers on grounds of copyright infringement for reusing legally purchased seeds during the next crop.

With President Obama’s re-appointed FDA commissioner, Michael Taylor, it’s no wonder the law coincidentally sides with Monsanto. Mr. Taylor was a former lobbyist for Monsanto as well as their vice president for public policy. Political satirist, Bill Maher, said, “making Taylor the food czar, the FDA commissioner of food is like putting Jerry Sandusky in charge of Chuck E. Cheese.” While this comedic connection brings humor to the grim reality of our nation’s priorities, it also acts as a reminder to the sad state of affairs in which we reside. Taylor played an instrumental role in the approval of the company’s bovine growth hormone and other products that quickly passed through the FDA. And we expect a few farmers to go to Washington and attempt to bring down the rampant greed-headed leaders and policy makers of this country? What a depressing commentary on the state of our union.

As a starving artist, I care precious little about the food that I eat provided it’s cheap and easy enough to make. Genetically modified or otherwise, I disregard toxic food labels and pride myself in the iron that composes my organs. What I do care about however, is the decline of our nation’s government to one that mimics the mafia more than what our founding fathers intended. In between trips to the bank and campaign lies of hope and change for our future, our government and policy makers have resorted to the global shake-down of every poor farmer attempting to feed his family and the world. Have you no shame? Are your hundred-thousand dollar cars and palatial estates not lavish enough? There are fraudulent, money-hungry, capitalist swine contaminating every corner of this country from the CEO’s of Enron walking away with the life savings of millions to monopolies like Monsanto, who have wriggled their way into our government and food supply.

We must realize that our weakness is not our inability to finance lawyers and purchase laws in our favor but our decision to sit complacently and do nothing. Our lack of voice, our defeated, apathetic ignorance is going to cripple this country and is precisely what the CEO’s and politicians want; they expect us to do nothing and assume whomever we elected is going to take the reins and guide us into opulence. As long as we let someone else do the difficult task of thinking for us, they will continue to pillage and pollute this planet until it is no more. Money has replaced every good and decent intention behind our growth as a nation; it is an incentive to go to war, it dictates laws, and is the reason I can’t look out a window without having my view ruined by advertisements. Our strength lies in the numbers we have in this battle of “us” vs. “them”. The self-indulgent are laughing at the incomprehensible ignorance of the masses that idly allow corporations to own our country. We must speak up and no longer allow ourselves to be controlled and fed any number of corrupt lies by politicians or corporations; our strength lies in our majority. If enough people stand up for what is right instead of taking the easy way out, they will be forced to hear our creed and only then will changes be made. Until then, profits will preside over prosperity and we have no one to blame but ourselves.