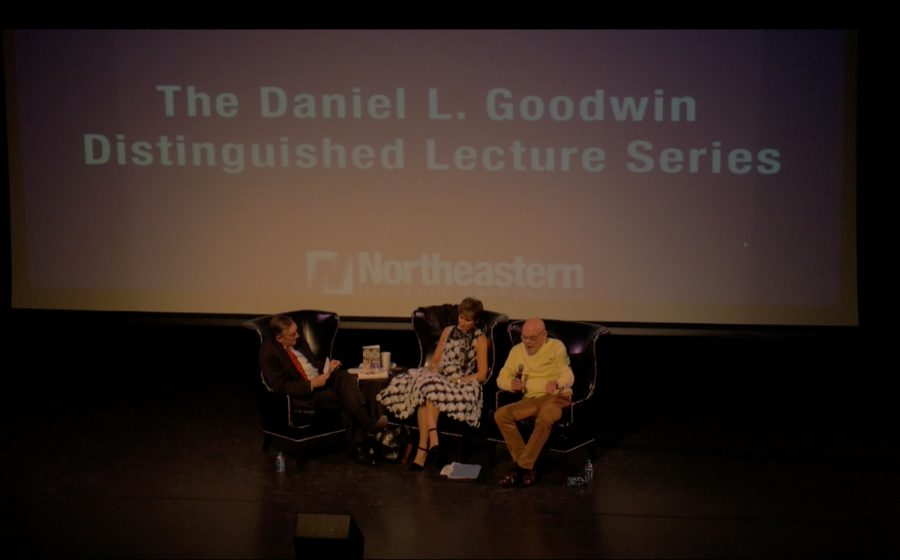 People packed into the auditorium until it was at capacity and still a lot watched from outside on monitors to see Mary Matalin (left) and James Carville (right) debate.

Political consultants and best-selling authors James Carville and Mary Matalin visited NEIU to discuss policy and power in the realm of U.S. politics. Carville worked for the Clinton campaign in 1992 while Matalin worked as campaign director for George H.W. Bush.

Additionally, NEIU welcomed back alumnus Thomas Corfman to moderate the discussion. The award-winning Chicago journalist earned his bachelor’s degree from NEIU in 1973.

“Universities have long been the centers of intellectual discourse and debate and Northeastern is no exception,” said Interim President Richard Helldobler at the event. “Particularly when it comes to topics relating to social justice, government and politics.”

Both Helldobler and the benefactor to NEIU’s College of Education, Daniel L. Goodwin, spoke about understanding opposing views and listening to the various sides of a conversation.

“What we’re going to do with this series is have some controversial speakers, I’m sure, but we’re going to be certain that we get speakers from all sides,” Goodwin said. “Universities should not and must not narrow the specter of free speech.”

Corfman kicked off the discussion by asking the duo what they each think the next 1,370 days will be like. Carville responded and agreed that free speech is essential and that the thing he is most afraid of is young people not being exposed to all kinds of ideas.

“For the life of me, I cannot understand why we would want to agitate the most populous country in the world – China – by completely breaking precedent,” Carville said.

He said whether it is true or not, he does not understand why the federal government is opposing one of the largest religions in the world.

“It’s a tumultuous time. I think politically in a country who has evolved and changed, my fondest hope is we get through this without some really dark consequences,” Carville said.

Before Matalin could answer, Corfman interjected and informed the couple that questions came in from the NEIU Political Science Department. A lecturer wrote in that in order to maintain a balance of power, “the two great powers of the U.S. either purposely manufacture crises or bring existing ones closer to verge of war.”

Corfman then asked if Trump’s foreign policy was occupied with “pushing” former allies. Matalin responded that even though she did not know the professor who wrote in to the discussion she thought that was “a cynical point of view.”

“Trump is jarring to people,” Matalin said. “But he is certainly presenting … an image of strength.”

She said that in less than two weeks President Trump has carried out many promises made on the campaign trail through executive orders.

“The thing is here is to have some allowance for diversity of thought, for a different approach,” Matalin said. “I don’t know that we can make an assessment on foreign policy, domestic policy, on any policy after ten days.

“What we can determine, it’s pretty evident, that he’s a man of action and he’s a man who keeps his promises.”

Her husband interjected and said that he thought it was a terrible idea to pick a fight with Mexico, Australia and China. “I think it’s impulsive, I don’t see it and I am scared. I have the right as an American to be scared,” Carville said to an auditorium full of applause.

She compared Trump’s low popularity to Obama’s high popularity and said in this way, they have transposed each other. She maintained that Obama had intense opposition to his policies whereas Trump has high policy approval with low popularity.

Matalin said she was a Libertarian and Carville spoke about the Democratic Party as a Democrat.

Regardless of the couple’s opposite views and preferences in political candidates, their shared consensus is that being a politician is still a noble profession.