Decisions made too soon: Repealing the ACA 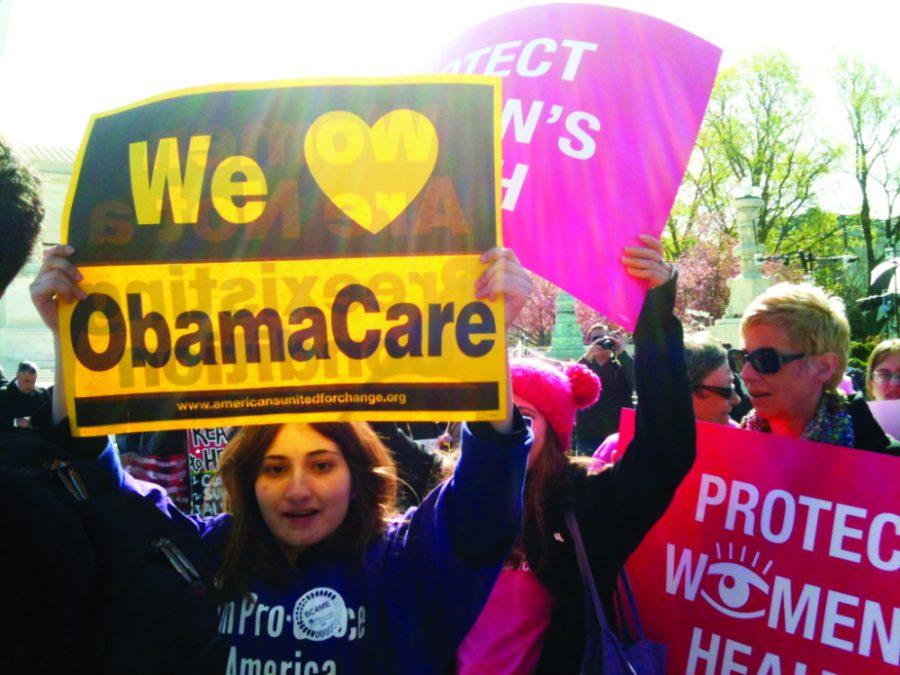 Thousands of Americans rely on the ACA, or Obamacare, for their healthcare needs. With repealment looming, Americans are unsure on whether or not they will be insured.

A population remains healthy with a service as essential as water and heat: affordable healthcare.

However, from the looks of President Donald Trump’s first executive order, that service will be harder to come by, especially with the order’s support from the majority of Republican Congress members.

According to the executive order, measures will be enforced allowing  the U.S. Secretary of Health and Human Services and the heads of the U.S. executive departments to “waive, defer, grant exemptions or delay implementation any requirements of the act that would place fiscal burdens,” and to “grant greater flexibility to states seeking to implement healthcare programs.”

Until the new system takes effect,  this could mean an end to the federal and state governments in the U.S. serving an efficient streamlined healthcare system to low income families in need of insurance for paying medical costs.

This would all be fine and dandy, if Congress had a cost-efficient alternative ready for implementation when the order went into effect.

For Speaker of the House Paul Ryan and Congress, that alternative was not prepared even on the brainstorming drawing board. On Jan. 26, Republican Congress members met privately to express significant concerns about the immediate effects of the order and the expectations of their alternative health care legislation.

A recording of the meeting was sent to the Washington Post and several other news outlets later that day through an anonymous email address.

The recording revealed concerns about preparing an alternative health care plan in time for the Act’s full repeal; minimizing the negative economic impact of the repeal; retaining affordable premiums for low-income families and reducing consequences from stripping funding from Planned Parenthood.

“We’d better be sure that we’re prepared to live with the market we’ve created,” Florida Republican House Rep. Tom McClintock said in the recording of the meeting obtained by the Washington Post. “That’s going to be called Trumpcare. Republicans will own that lock, stock and barrel, and we’ll be judged in the election less than two years away.”

According to the Washington Post, members like Senators Rob Portman and Bill Cassidy worried that the money saved from repealing the Act, around half of a trillion dollars, will be needed to cover the costs of implementing the new Republican healthcare plan along with the chance of raising taxes on the middle class.

This might just be a new textbook example of how to write yourself into a corner, and it is a big shame that it is at the expense of the majority of the people of the United States.

If the Republican legislators are worried now about the disadvantages of getting rid of the Act, what could have been their possible motivation to repeal it in the first place? If putting in a new health care plan for citizens would require them to take more money from the citizens’ hands, why continue to eliminate a system that insured 20 million citizens for medical costs that would otherwise have a significant impact on their yearly gross income?

If you ask me, it is because the government just wants more of your money. Observing the Republicans rush to put in any system offered by their party, it seems that they don’t really have a way to radically change the system to be significantly unique from what former President Barack Obama helped create in his term.

I say that the government wants more money because Congress is setting its focus on cutting funding for programs that the Republican party subjectively sees as trivial expenses on the nation’s budget, like programs to help low-income families and youth in urban cities. After all, Congress’ agenda does include cutting corporate tax rates and reversing environmental regulations set by the Obama administration, as noted by Congress on Jan. 3.

This is not  to mention  how often Congress pushes to fund the defense budget for the U.S. military, which accounted for a request of $585.3 billion dollars for FY2016, according to the Department of Defense Comptroller.

It is absurd how the agenda focuses more on making the rich wealthier, while the nation’s atmosphere and lower social classes suffer. Worse, the executive decisions for the Act’s replacement are being made without consulting the Democrats of Congress, in a branch that requires the full input and constitutional judgment of every member involved in making the new healthcare system that President Trump touts.

“We’re going to have insurance for everybody,” Trump said on Jan. 14 in a telephone interview with the Washington Post. “There was a philosophy in some circles that if you can’t pay for it, you don’t get it. That’s not going to happen with us.”

The Republican Congress is now tasked with delivering on not only the public’s expectations, but also Trump’s expectations of a better healthcare system.

Between Trump’s penchant to lie and flip-flop on national issues, I seriously doubt any progress will be made either by his administration or by the Republicans in Congress in their secret hideouts for overly-ambitious agenda discussions.