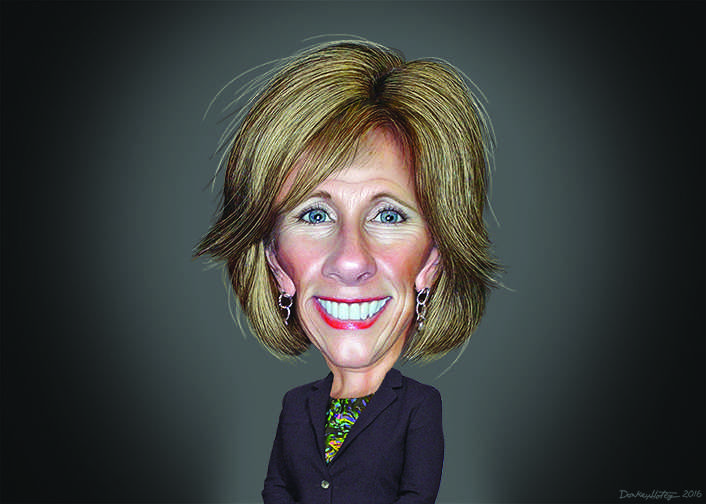 Once in a blue moon there will come a candidate for a cabinet position who shows such a disturbing lack of knowledge in the field that it becomes befuddling as to how that person was selected.

Long-time Michigan school reform lobbyist and billionaire, Devos joins the ever growing list of Trump’s Fortune 500 appointees as one of the most pronounced and powerful supporters of alternate forms of education. She also stands arguably as the most unqualified of the bunch boasting no experience in public education administration nor any substantial experience with student loan programs.

On top of that, Devos seemed genuinely bewildered in her confirmation hearing. She seemed to not understand the basic principles of IDEA, which are to protect educational rights of students with disabilities and give parents a voice in their child’s education. Devos became equally confused when one senator quizzed her on her thoughts on the growth versus achievement debate. The capstone of her baffling responses was when another senator asked whether guns should be allowed in schools. Her response was that it depends because ,in some cases, she would imagine that “there is probably a gun in the schools to protect from potential grizzlies.”

The astonishingly peculiar way she attempted to answer one of the most serious issues in American schools reflects the disconnection between Devos and public education.

She neither has the information to understand the most basic educational debates, nor the temperament to gauge the current issues facing American education. If the committee hearings were the sole determinant of whether a cabinet appointment would be sworn in, Devos would be a definite “no” vote–but that’s not the case.

There’s also the track record of  the state of Michigan in which she played a heavy role in pushing school choice down the throat of every taxpayer by bankrolling multiple lobbyist groups in support of making Michigan a breeding ground for charter schools. In the early 2000’s, the Devos family started a PAC called the Great Lakes Education Project, or GLEP, that has served as a source of the staunchest opposition to any state laws attempting to rein in charter schools and has fought successfully to the lift the ban on the number of charter schools Michigan is allowed to have.

The GLEP, to which Betsy Devos has given more than $2 million since 2001, has held the Michigan GOP legislators by a vice grip, diverting enormous amounts of funding and almost assuring that a vote they see as unsatisfactory will lead to an incumbent losing in the next primary. In 2011, this was the case for Republican State Rep. Paul Muxlow, who after the successful passing of legislation that lifted the cap on charter schools, faced relentless opposition by the GLEP after they found out he voted against the bill. The GLEP quickly found a candidate to run against Muxlow, and according to the Detroit Free Press, spent almost $185,000 to dethrone Muxlow.

This fear mongering and money gouging is quintessential to the identity of the Devos family and is so absurd in its obvious political sway it sounds like something out of the movie “The Campaign” — but it’s real.

In 2016, the Devos family donated $1.45 million in the span of two months to Michigan GOP senators while a bipartisan bill to hold charters responsible was making its way through the senate. The Devos family had again succeeded to smite down accountability legislation as the bill later caved under its own weight against a senate that had a sudden “change of heart.”

The amount of interference by the lobbyist headed by the Devos family has led to a construction of charter school wild, wild west. A dystopian education breeding ground where anyone with a decent amount of money can start up a school and receive funding by the state no matter the quality of education.

This has led to an influx of for-profit charter schools to inhabit the state of Michigan at astounding rates. The Detroit Free Press reports that 78 percent of charter schools are run by for-profit businesses. This is by far the highest rate of for-profits charters in any state in the U.S., with Missouri ranking second with 36 percent. The lack of regulation has led massive amounts of underperforming schools to continue to receive funding while many of their school CEOs receive six digit salaries.

If that’s not unsettling enough, it should be noted that millions of taxpayer money has been documented going to ‘ghost schools’– basically schools that were never even opened. The Center of Media and Democracy reported that in 2011 and 2012 the Michigan government spent $1.7 million for charter schools that never opened.

Michigan is an example of how not to use charter schools. If the Devos family is at the heart of this catastrophe, why on earth would we pick a Devos to run our country’s public education? If we have the discernment to recognize that Michigan is not an example of how we as a nation want our education to be run, then we shouldn’t stab ourselves in the chest by electing a candidate that represents the problem, not the solution.

Betsy Devos has shown herself to be woefully incompetent through the mess she created in Michigan and we should take that to heart. We need to recognize that Betsy Devos has already shown us who she is through Michigan. If we learned anything from this previous election, it is that “when someone shows you who they are, believe them the first time.”