Take a trip inside the mind with ‘Psychonaut Librarians’ 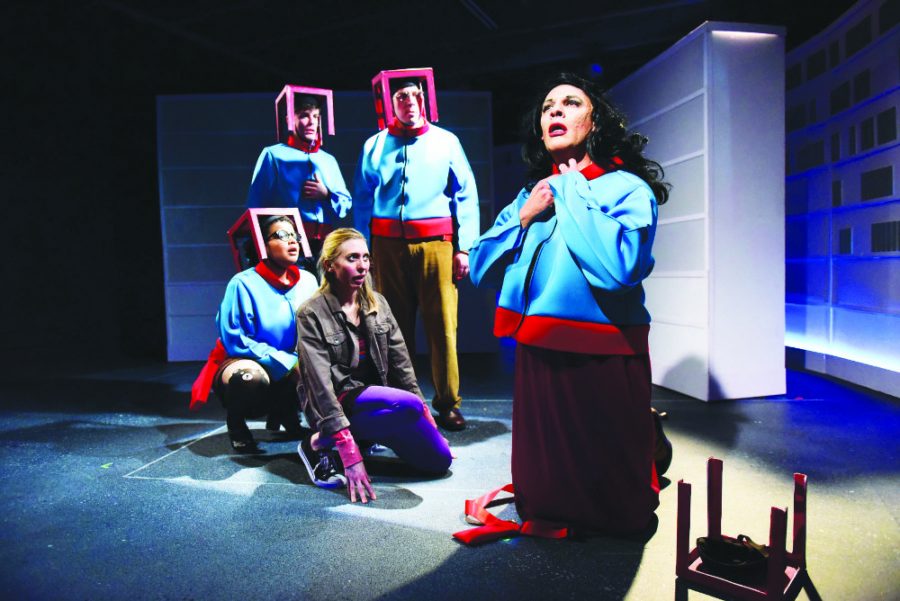 Operating under the premise of exploration, one has to test their boundaries. These boundaries are tested in Sean Kelly’s play “Psychonaut Librarian.” Directed by Krissy Vanderwarker, “Psychonaut Librarians” explores the lengths a viewer might go for love, adventure, or an endless childhood. Currently being staged at the Den Theatre in Wicker Park, “Psychonaut Librarian” has a wonderfully quirky sense of humor shown with most range by Hester – played by David Cerda – the mother of the main character.

The play uses the small stage and limited set design wonderfully. One of the biggest laughs of the night came when the characters of Jane, Rosemary and Emmerick, played respectively by Christine Mayland Perkins, Morgan McNaught and Michael Peters, used finger puppets in a “shrinking” gag.

However, the strength of the humor distracted from some of the existential messages about the human condition. One of the main threads running throughout the play is the love between Jane and Dewey (played by Matt Farabee). Their love seems like an escaped dream attempting to find human connection; it runs through a repeated refrain about love knowing no boundaries which becomes a rather pretentious display of amateur philosophy. These conceptualizations are by far the weakest part of the show. Even though Perkins and Farabee performed them with zeal, it could not cover up for the shortcomings of the script in these sections.

As a small, independent production by The New Colony, the play used the small stage and set design to wonderful effect. The library “stacks” became tapestries for the lighting designer, Alexander Ridgers, as the characters moved from our staid universe to the surrealist and psychedelic Anyverse. Thematically, the lighting and sound designs were two of the best aspects of the show. With an original soundtrack scored by Matthew Muniz, the soundscapes mostly stuck to ambient electronic bleeps and bloops with dramatic flourishes, particularly during the theme for the villain, Sandman (played by Jack McCabe). An eerie minor key theme, Muniz helped to underscore the campy nature of the character, while also building him into a formidable presence with the help of lighting by Ridgers. When taken in conjunction with each other, their work created a truly unique look and feel for the character.

Within the strengths and weaknesses of the play, such as the repeated refrain between Perkins and Farabee, contrasted with the hysterical use of finger puppets, there is an interesting story about humanity and love that “Psychonaut Librarians” is trying to tell. The idea of belief in things beyond our concept of reality is discussed, as is the power of love. Both of these ideas are presented, more or less equivocated around, with no real resolution to either. Those questions are obviously some of humanity’s biggest and most complicated. Presenting them in a play that ran just over 60 minutes is a gutsy move. While there were some interesting points made by the script, it never felt like it was getting close to an answer. All of that said, the strength of the humor and the fun provided by the cast made this play more than worth it. 3 out of 4 stars.