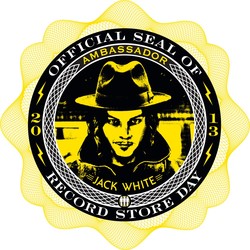 Since the initial declaration in 2007, the third Saturday of April has been dubbed “Record Store Day.” Record Store Day is observed within the United States and internationally to celebrate independently owned music shops. With today’s bombardment of online shopping, behemoth corporations enlightening the masses of what’s “hot,” and illegal downloading, visiting an actual record store is something of a myth today, and so is the acknowledgment of the vinyl format.

For the last four years, ambassadors of this day have been appointed to essentially be spokespeople for the cause of supporting the art of music as well as communities supporting their local record stores. Current member of Metallica, Ozzy Osbourne, Queens of the Stone Age front man, Josh Homme, and Iggy Pop have kick-started the holiday in the past, but for this year’s event, musician/producer/record label founder Jack White takes the reins. The former White Stripe, now solo artist and pioneer of Third Man Records (White’s label headquarters that doubles as a record store in Nashville, TN), is a more than capable individual with a preceding reputation of musicianship and collaborative chemistry to make 2013’s Record Store Day a memorable one.

The big idea behind Record Store Day is the acknowledgment of community support for the independently owned and run mom-and-pop businesses, as well as the appreciation for physical music whether your preference is cassette tapes, CDs, or vinyl records. And with great support comes great celebration. The daylong party consists of local and well-known musicians stopping by shops to orchestrate in-store performances, local vendors and restaurants setting up food stands, and best of all, for vinyl enthusiasts, the limited editions of albums and singles that go on sale exclusively for Record Store Day. But limited means limited. In most cases, quantities for the exclusive releases range anywhere between a few hundred to a few thousand worldwide, which means each record store only gets a handful of each release.

Record Store Day is Saturday, April 20. For a list of local participating record stores and up to date notifications about exclusive releases, visit Recordstoreday.com.