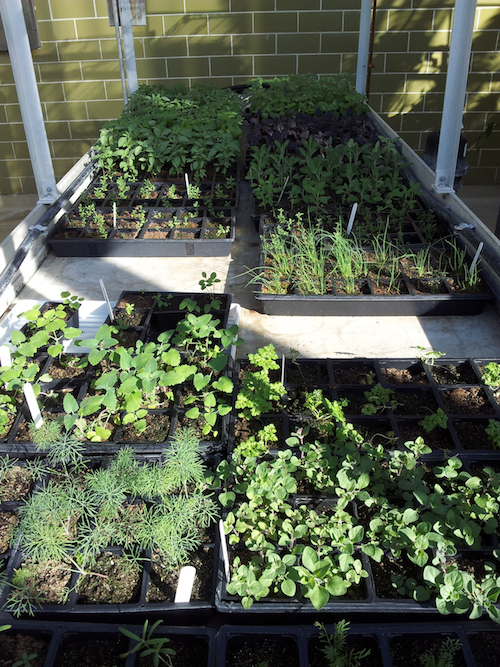 The greenhouse acts as a home to a vast variety of plants that students cultivate for their fundraising sale.

The semi-annual greenhouse plant sale held by NEIU’s Biology Department took place on Nov. 15. Kip Conwell, a biology lab manager who has been with NEIU for nine years, said this function has been going on for more than 35 years at the university.

“It’s a very long standing tradition,” Conwell said. According to Conwell, more than 20 student volunteers came together to help with the event.

“The plants are grown by volunteers that are students, usually biology students, but anybody can do it,” said Conwell. “Everything we sell was grown here in the greenhouse either from cuttings are seeds.”

Conwell described the vanilla bean orchid as a unique plant that the greenhouse grows,  and said it takes nine months to flourish  — they must be pollinated by hand — and the flowers only bloom for 10 hours. The whole process for refining the vanilla beans, however, takes about a year.

All proceeds collected from the greenhouse plant sales go right back into an account for the greenhouse to fund its expenses. Conwell also noted that the major contribution the greenhouse provides for NEIU is the ability to conduct research projects for biology students taking plant anatomy, morphology and other such classes.

“Six or seven years ago, there was so little research that was student led research for undergraduates,” Conwell said. “Starting from 2010, we have been growing our research program. It’s burgeoning. It’s amazing how much student research is happening.”

He said approximately “40 to 50 biology student researchers” are spending “20 to 30 hours per week” after classes in labs.

There are students who have won awards for their research and presented their work at conferences. Conwell said that some students from NEIU will be going to Japan for a research project.

“I think that it pays dividends, I think that it makes a lot of sense,” said Conwell about the research projects the biology department is working on for its students. “The students get a lot out of it and faculty members are very satisfied because they can see that they are growing the opportunities for their students and the students are really succeeding.”

Dr. John M. Kasmer, chair of the biology department said in an email that he is proud of how much the department can offer students given their limited resources.

“If I had to identify just a couple of things that have made the biggest difference in going from a department with a small faculty and little active research to a vibrant productive department,” Kasmer said. “It would be a long string of excellent hires of tenure-line faculty, and grants that have provided funding to support faculty-student summer research and renovation of both teaching and research labs.”