U.S. bombed Yemen, does anyone care? 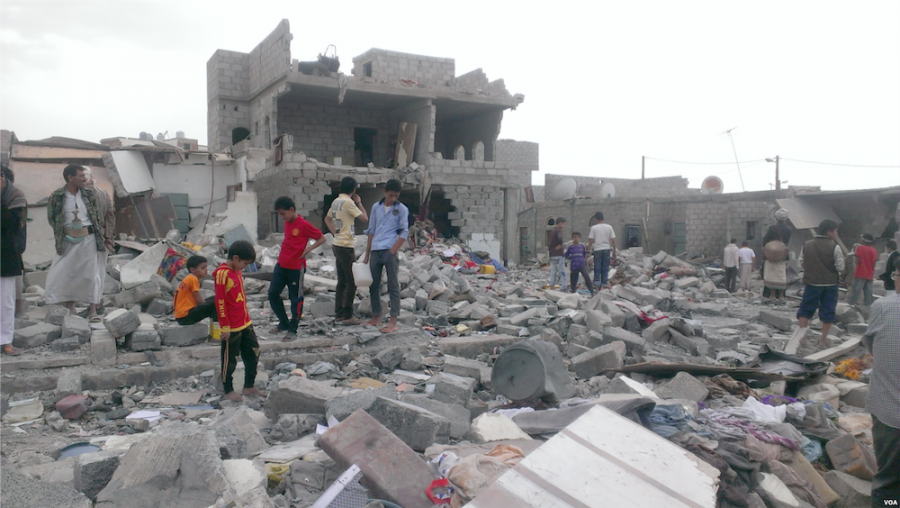 The aftermath of an airstrike carried out by Saudi Arabia in Yemen’s capital of Sana’a.

The U.S. has had a history of supporting oppressive and destructive regimes in all corners of the world. On Oct. 12 the U.S. bombed three radar satellites in the Houthi-controlled area in Yemen. One of the most concerning things about this is the lack of coverage this has garnered by the American bourgeois press.

This would mark the very first time the U.S. has taken direct military action in Yemen since American troops pulled out of the area 18 months ago when the Houthis, a Shia insurgent group, overthrew the Yemeni government, forcing the U.S. to withdraw their forces in the area.

U.S. Pentagon officials have called this a “limited self-defense” retaliation. The Pentagon claims that U.S. warships were targeted off the coast of Yemen, and the attacks, they believe, were carried out by Houthis.

Houthi officials deny any involvement in the attack. They have even offered aid in the investigation of these attempted bombings, according to The Guardian.

Even before these events transpired, the U.S. has been playing an indirect role in the destruction of Yemen by aiding the Saudi-led coalition by providing them arms, refueling their jets and providing logistical support, according to Vox.

In August, the U.S. approved of a $1.5 billion arms sale to Saudi Arabia. A few days after that deal was signed, the Saudi-led coalition bombed a Doctors Without Borders hospital killing at least 11 people. In early October, the Saudi’s bombed a funeral where over 100 people were killed, according to an article published by the New York Times.

In a report by The Intercept, the MK82 guided bombs used in the bombing of the funeral are without a doubt American manufactured. Pictures of bomb fragments at the funeral site clearly shows the role that U.S. plays in the Saudi-led destruction of Yemen.

These are only two out of the many atrocities that Saudi Arabia has carried out in Yemen. The Humans Right Watch has described the bombings as apparent war crimes.

Apart from the bombings, Saudi Arabia has enforced a water and air blockade in Yemen, preventing the import of foods and medical supplies into already one of the poorest countries in the region. A photo essay published by Quartz Digital News shows the devastating effects this blockade has had on Yemen.

Saudi Arabia is a well-known U.S. ally, and one of the biggest allies they have in the Middle East.

According to the U.S. Energy Information Administration, as of August, the U.S. has imported 1,142,000 barrels of oil daily. The U.S. also imports most of its oil from Saudi Arabia. In fact, it only trails Canada in oil imports to the U.S..

Reagan’s administration openly supported ruthless dictator Augusto Pinochet of Chile, who turned the capital of Chile into a torture camp. This practice remains consistent today with the

The U.S. must denounce and stop the sales of arms to Saudi Arabia. Their indirect role in the war crimes carried out by Saudi Arabia should not be tolerated, especially now, since the U.S. has directly bombed Yemen.

This presents the possibility of a new war for our neo-liberal leaders to happily engage in, in order to keep their economic relationship with Saudi Arabia in good standing.