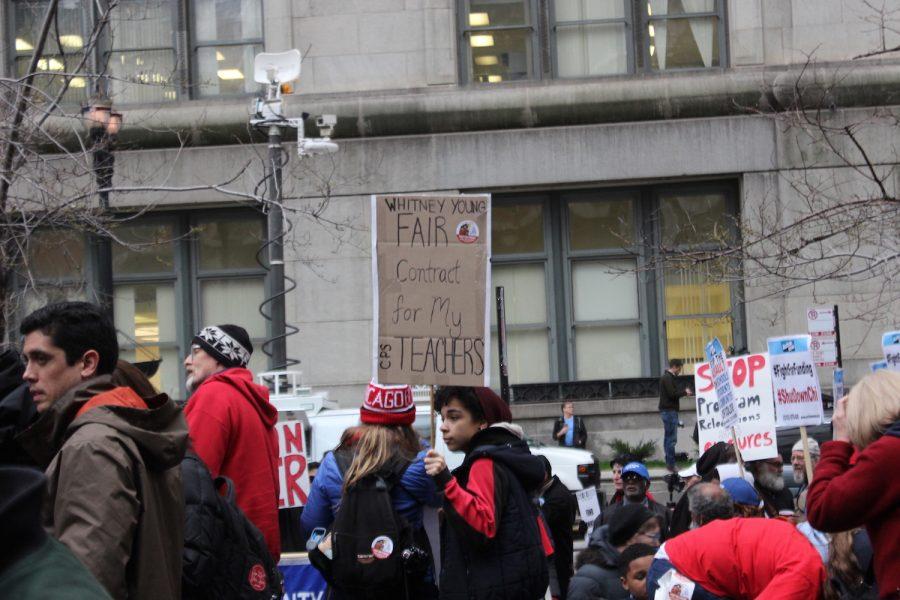 Participants from NEIU join over 10000 protesters-from rally points all over the city and state for a one day strike and rally downtown this past spring.

The teachers may be out, but the schools are staying on schedule for Chicago Public Schools.

Though the members of Chicago Teachers Union will strike Oct. 11, CPS plans to keep the doors of public schools open for students to attend their regular schedules and have free breakfast and lunch for that day. In addition, Chicago Transit Authority will be providing free rides for students from 5:30 a.m. to 8:30 p.m. for as long as the strike takes place.

It is interesting to see how ready the school and transit systems are to prepare students for days without their respective teachers. It comes off as expected and dispensable, much like what CPS expects from the loyalty of its teachers.

The bigger problem stems from CPS’ treatment of the situation, paying to have schools open instead of paying the teachers who are trained and hired to instruct them. It is as if CPS is saying they don’t need the teachers to provide the education the students need. Rather than fairly negotiate a contract satisfying  both parties, CPS continues to strain its relationship with CTU members through scapegoating and pay and pension reduction every year.

Some parents, like Kowanna Henderson of Near West Side Chicago, have opposed the strike, for concerns of the welfare of the children and the difficulties for parents working on Oct. 11.

“I’m for the teachers. They need to get paid.” Henderson told the Chicago Tribune. “But they need to come to a solution.”

CPS and CTU must come to an immediate solution to avoid risking the neglect of the young students’ education. The ongoing budget impasse in Illinois has placed a heavy burden on the funding of public schools, and the prioritization of paying teachers fairly has fallen out of CPS’ favor, as their budget charts show for the fiscal years of 2015 and 2016.

According to the CPS website, the organization reported a loss of $110 million in state funding between 2015 and 2016, negatively affecting the teachers’ salaries and funding for student programs. The website also shows the troubling decline in school operations, the most recent being a $55 million cut for FY2015.

Why else would the state be selective about its funding?

Illinois should be looking out for the teachers, ensuring a fair salary and pension and providing the students with new materials.

Would the strike have a strong effect on the politicians and administration responsible for extending the funding crisis? Most likely not.

If the politicians have gone this far postponing the agreement of a new contract, then the welfare of the teachers is not in their mind. In addition, striking has now become an unfortunate tradition for the union, a final yet common resort to annual contract negotiations.

This doesn’t necessarily mean I am against the strike at all. I’ll stand with the teachers the whole way through because they fulfill an important role in society that no political figure can replace.

Some teachers can get a lot of unnecessary crap to their already packed responsibilities and heavy work hours. Such as advocating with parents and students with special needs to get services they need or even supplying basic classroom necessities not provided by the school out of their wages.

Teachers have to answer to inquiry from parents, draw up lesson plans, clean up after the classrooms, arrange tutoring hours for students in need, represent the faculty of the school and adjust their teaching to have it apply to the students’ individual needs. Some teachers, if they have financial problems, supplement the pay from their jobs with second and even third jobs.

Considering that the strikes have reflected Illinois’s funding issues for a number of years, CPS has continued to make cuts, even with the impasse in effect. There have been many strikes up to this day and they will continue until there is an appreciation of the work that educators do.

For CPS, teachers will either accept a reduced pay and pension or quit and work elsewhere. They never look at the cuts they have made in the past and ask themselves, “Are we the reason the teachers are angry?”

Reform starts with the community choosing leaders who are invested in them. The strikes will not end until CPS and CTU buck up and unite to address the funding issues that halt the progress of our school system.

Correction: The Chicago Teachers Union has struck a contract deal averting the strike that was scheduled to take place on Oct. 11. (October 12, 2016)